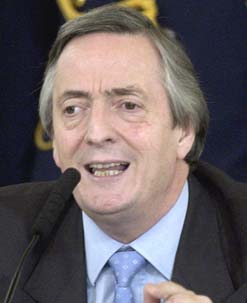 When Argentine President Nestor Kirchner made a proposal, during last year’s IMF meetings in Dubai, to restructure $88 billion worth of defaulted sovereign debt, he was emphatic that the government would hold firm on an offer that asked bondholders to take a 92% loss. However, with litigation from disgruntled creditors mounting worldwide, Kirchner has blinked at last. In June his government presented a second offer that cut the loss to 75%. Bondholders are still up in arms.

“There is no reason for Argentina not to improve its offer so that both sides can feel satisfied,” says one US bondholder who believes the “haircut” remains excessive.The administration contends that paying any more would heighten social problems at home.That may be true, but with government revenues up more than 70% in the year to May 2004, the official argument is a hard sell.

Economy minister Roberto Lavagna says the revised offer is non-negotiable, but bondholders are holding out for something closer to 50%.

One of the new offer’s key differences is that it recognizes past-due interest, in a move that boosts the total amount to be restructured to $100 billion— the largest debt workout in history. The deal involves an exchange for new bonds with maturities ranging from 30 to 42 years, for which bondholders would still have to wait quite a long time before getting paid.

ABN AMRO commented in a report on the plan:“Contrary to early expectations on the part of many investors, the government is not willing to make any up-front cash payment as an incentive to increase participation in the transaction but has instead put on the table a very back-loaded plan.”

The stakes are high as the eventual settlement will affect Argentina’s ability to some day return to international capital markets—which would also reopen the door to international financing for local corporates. But as Adam Lerrick, an economist who leads a group of international bondholders, said in a statement earlier this year: “We no longer live in an era where the governments of private sector lenders send the navy to collect on their bad loans.The only rational reason to pay is that there is more to gain from paying than from not paying.”