The clear “no” votes in the Netherlands and France on the EU Constitution led some market participants to remark that the euro has become a currency without a country.


Italian labor minister Roberto Maroni even suggested that Italy should consider dropping the euro as its currency. Maroni is a member of the Northern League regionalist party, which fights for a separate state for northern Italy. He said the lira, Italy’s former currency, should be temporarily reintroduced because the euro has led to economic problems, including a loss of competitiveness and high unemployment.

Italy’s finance minister, Domenico Siniscalco, rebutted this argument, saying that returning to the lira made no sense because it would raise the cost of financing Italy’s debt.

The euro weakened sharply in response to the twin “no” votes, but analysts say the initial reaction appears to have been overdone. The European monetary union, or EMU, is not about to fall apart and the euro will still achieve full reserve-currency status, although it may take somewhat longer than had been expected, currency market analysts say.

“The votes against the constitution have raised the perceived political risk in Europe and put the spotlight on some of the relative-growth issues and the difficult economic backdrop,” says Robert Lynch, head of Group of 10 foreign exchange strategy, the Americas, at HSBC Bank in New York.

“The euro itself has been a success, not only as a big, active market, but also as a medium of exchange,” Lynch says. “The euro is backed up by a liquid money market and is useful to investors,” he says.

While the immediate market impact of the Dutch and French “no” votes was a great deal more significant than had been expected, the outcome of the voting will not change the viability of EMU as a project, according to Lynch.

“Over time, the euro will still take on a greater role as a reserve currency,” he says. World central banks have increased their holdings of euros from 12.7% of international reserves at the end of 1999 to 18.4% at the end of 2003, according to the International Monetary Fund, and HSBC estimates that the percentage of reserves in euros rose to 20.4% in 2004.

Despite the euro’s recent slip, it likely will continue to perform well against the dollar over the longer term, Lynch says.

“At the end of the day, the US still runs considerable twin [current account and budget] deficits, and there still will be issues associated with funding the deficits,” he adds.

The dollar’s gains so far this year, reflecting capital flows into the US, do not mean that foreign appetite for US assets will remain strong forever, Lynch says. 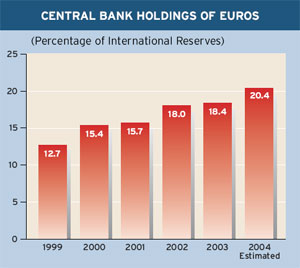 Growth in the US economy likely will slow later this year, at about the same time that market participants become convinced that the Federal Reserve is almost done raising interest rates, and this could set the stage for a renewed decline in the dollar, according to Lynch.

Other analysts also say they have not abandoned their longer-term bearish views on the dollar.

“The more the dollar strengthens, the more US external imbalances are compounded, and the greater the likelihood of a disorderly adjustment later,” says David Gilmore, economist and partner at Essex, Connecticut-based Foreign Exchange Analytics.

“This is not the end of the euro, as some have claimed,” Gilmore says. “Central banks are not going to reduce euro reserves; they are likely to continue to add to them despite the political crisis.”

The real danger ahead, according to Gilmore, is that the French and German governments, in a desperate attempt to remain in office, will increase spending to try to stimulate job growth. “Alternatively, they could take an even darker path of importing prosperity with deliberate efforts to weaken the euro a lot more,” he says. “Or they could do nothing and wait to be voted from office.”

However, in order for there to be a major sustainable downward trend in the euro and rise in the dollar, Gilmore says, there will need to be a reduction in the US budget deficit.

“On the surface, US economic fundamentals appear strong, and they appear very strong next to Europe and Japan,” Gilmore says. “But probe under the armor, and the knight is soft and vulnerable,” he says.

Not About the Euro

“Where currency itself is concerned, it’s never been about the euro,” Auth says. “Euro strength has been all about the Chinese and Japanese attempts to keep their currencies pegged to the dollar.”

During the latest cycle of dollar weakness, Japan and China have not been purchasing their own currencies with the dollars they hold, he says. Instead, they have purchased euros, driving up the value of the euro, according to Auth.

The situation could change some time in the next 12 months, he says, but not until the US stops pressuring China to revalue. “While revaluation probably would benefit China in its fight against inflation, that nation’s leaders do not want to be seen as caving in to US demands,” Auth says.

The drop in the euro was going to occur anyway, whether or not the constitution was voted up or down, says Carl B. Weinberg, chief economist at Valhalla, New York-based High Frequency Economics. “Interest-rate spreads rule, and spreads have moved in favor of the dollar,” Weinberg says. “Traders are being paid to short the dollar.”

The EMU will be around for a very long time, he says, because it would be extremely costly for a country to drop out. If Italy were to drop the euro, it would cost it several hundred basis points more to borrow, he says.

The timetable for EMU membership of the 10 new member countries that already have joined the EU is unlikely to be affected, since it will depend on economic and fiscal performance in these countries rather than EU institutional issues, according to Mercier. “Similarly, the outlook for 2007 EU entry of Bulgaria and Romania remains relatively safe,” he says.

“The case for countries yet to negotiate their entry, including Turkey, Croatia and Serbia, is more tricky, and existing EU members will adopt a tougher negotiating stance in the wake of popular concerns about enlargement,” Mercier says. But EU entry for these countries will not happen for some time, leaving them ample time to meet the entry criteria, he says. 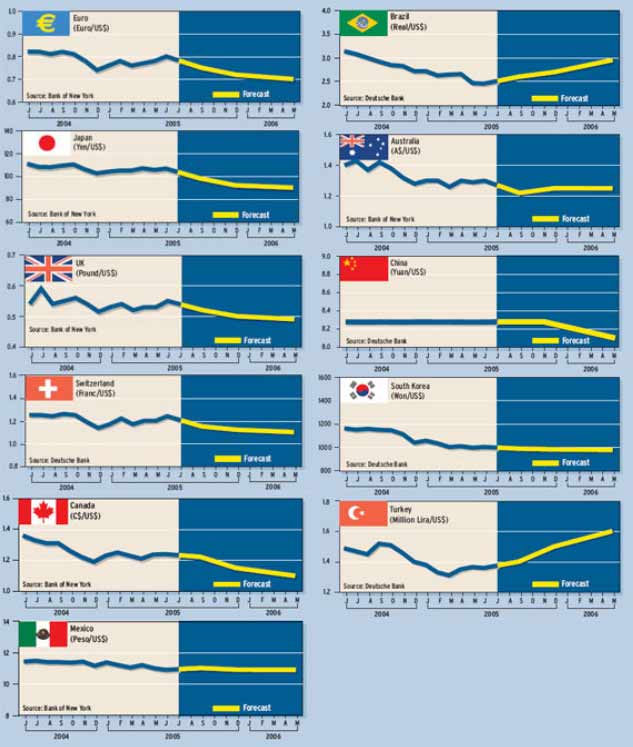