Cover Story : Living On The Edge

July 01, 2005
Author: Mark Lehane
Just months after analysts began suggesting it could topple the dollar as the world’s favorite currency, the euro has been shaken to the core. Its troubles have brought into focus the problems at the heart of the European Union. 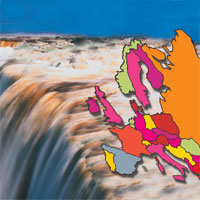 For believers in the European project, the news just keeps getting worse. On May 13, French citizens delivered an astounding slap in the face to their political leaders, voting against a new constitution for Europe drawn up by a former French president. Just one week later, an even larger percentage of Dutch voters said no. That immediately plunged the European Union into turmoil.


Any hopes of salvaging something from the wreckage were dealt a brutal blow when a late-June summit of EU leaders ended in acrimony. Ostensibly, the argument was over French desire to revise a British budget rebate won by then-UK Prime Minister Margaret Thatcher back in 1984; in reality it reflected cataclysmic fault lines in how the various European countries saw the future of the Union.


Living on the Edge


“The Union is not in crisis,” said Jean-Claude Juncker, Prime Minister of Luxembourg and outgoing president of the EU Council of Ministers. “It is in a profound crisis.”

But the tortured politics don’t just reflect the clashing of national pride. They also reflect wrenching economic stresses. Many of Europe’s economies are on the rack. Germany is forecast to grow by just 0.7% this year. Italy is in recession. And one in 10 French people are out of work. Many ordinary voters blame the euro, as, increasingly, do their leaders.

Intent on establishing its inflation-taming credentials, the seven-year-old European Central Bank has stubbornly refused to cut interest rates, which have stood around the 2% mark for the past two years. That’s played havoc with some economies. “You just need to look at the evidence before your eyes to see that it has been a disaster for the German economy,” says Niall Ferguson, professor of history at Harvard and a senior fellow at the Hoover Institution at Stanford. Germany’s citizens seem to agree. A recent poll in the weekly German magazine Stern showed that 56% of respondents wanted the deutsche mark back. That’s led some to start thinking the unthinkable: Might the euro collapse before it makes its 10th birthday?

The EU crisis has crystallized a long-simmering debate between its members over what the Union needs to do to cope with looming challenges to once high-flying economies. In one corner stands UK Prime Minister Tony Blair and his allies, largely Nordic; in the other, the French and other southern European nations.

The “herring eaters,” as EU insiders term them, argue that high wage costs, rigid labor markets and bloated welfare systems mean that European counties will be unable to respond to the competitive challenges presented by China and India. The “pasta eaters” agree that reform is needed but are unwilling to tear up the post-World War II social model that had delivered such prosperity across the Continent.

“The French referendum makes it particularly hard for the EU to push ahead with economic reform and enlargement,” says Charles Grant, director of the Centre for European Reform, a London-based think-tank. “Many will interpret the ‘non’ as a vote against liberalization and further accessions.”

Wim Kok, the former Prime Minister of the Netherlands, says: “We run a risk of a reform standstill. Every government should realize that the market will not be waiting. We would be stupid if we were to allow ourselves to stagnate rather than reform.” Kok chairs the EU’s high-level group on the Lisbon Strategy, a set of targets for making the EU’s economy more flexible, competitive and knowledge-based by 2010. The second half of a progress report by Kok’s group, the first part of which was published earlier this year, is substantially behind schedule.


The demise of the euro is not as improbable as it first sounds. Investment banks in London have already begun to circulate notes on possible exit strategies from the currency. The French and Dutch “no” votes to the constitution were at least partly a reaction against the euro, and those swelling tides of discontent have encouraged those politicians who want the option of scrapping the single currency put on the table. Immediately after the Dutch “no” vote, Italian welfare minister Roberto Maroni suggested that Italy should re-adopt the lira.

While those calls still largely come from the political margins, there are signs that even more level heads are wrestling with the practicalities of a break-up of the euro. In May the German finance ministry was forced to deny that officials had discussed the “What if?” question with their political masters.

In truth, the underpinnings of the single currency have begun to look a little worn around the edges, with key countries flouting rules on public finances by running budget deficits above the 3% level agreed under the Maastricht treaty. With Europe’s population rapidly aging, the fiscal climate looks certain to worsen in the absence of reforms to tighten budgets or boost long-term growth. Moritz Kraemer, an analyst at S&P; in London, says that, on current projections, deficits in France and Germany (and the US) will rise to over 200% of GDP by 2050, levels “more akin to those currently associated with speculative-grade sovereigns.”

Unsurprisingly, the euro establishment is fighting back. “Absurd,” is how Jean-Claude Trichet, president of the European Central Bank, describes talk of a break-up of the currency. “The euro is an old-style marriage where divorce does not exist,” says Joaquim Almunia, the Spaniard who as EU monetary affairs commissioner is point man for the single currency. Technically, he’s right. There is no provision for a country leaving the euro; in theory they would have to leave the European Union itself.

But what signals are the markets sending out? Mixed ones, say most observers. In late June the euro stood at $1.22, down from a high of $1.35 at the start of the year. Gold hit a high of $438 an ounce equivalent in euros, at least partly on the back of investors seeking a safe haven from the turmoil surrounding Europe.

On balance, analysts think the currency will remain weak but won’t fall into a swoon. “I don’t think we are going to see a collapse of the euro,” says Sebastian Paris Horvitz, deputy director for investment strategy at AXA Investment Managers in Paris, “but we could certainly see it going down to $1.20.”

A Storm in a Teacup?


The fate of the euro is not just determined in Europe. Robin Bew, chief economist at the Economist Intelligence Unit in London, argues that concerns over the US current account deficit may cause the dollar to slide again. “Worries over the EU constitution will actually start to fade,” says Bew. “But there is this big structural issue which remains in place—the size of the US current account deficit and the need for them to fund that over the long term. That’s still there, and it’s not getting any smaller. In fact, it is getting quite a bit larger. We’re looking for $1.40 by the beginning of 2006.”

The irony is, of course, that a strong single currency has stoked many of the tensions that now threaten to tear it apart. A euro hovering near $1.40 would choke the eurozone still further, says Bew. “At those sorts of rates it is very damaging to eurozone growth. They haven’t really got much in the way of domestic demand; at those sorts of exchange rates they’re not going to have much in the way of trade either.”

But what is the bond market signaling? If bond buyers were seriously worried about the euro splitting up, they would logically be marking down bond prices on likely exit countries, pushing yields up. The 10-year interest rate on an Italian bond had moved out to 22 basis points over its German counterpart by early June—the largest difference since October 2002 and twice the level seen at the end of May. Credit default swaps—contracts that protect the buyer against a borrower not paying its bonds—had already begun to move in anticipation of “no” votes in the referendums. Spreads on default swaps issued on Portuguese, Italian and Greek bonds had moved out by up to 100% from a month before. Still, at spreads of up to 22 basis points they signaled a sovereign default as extremely unlikely. And even weaker names found it easy to sell bonds after the referendums. Italy effortlessly placed up to €5 billion of bonds during June.

Maria Cannata, head of funding at the Italian treasury, says the question of an Italian exit from the euro is not discussed in serious circles. “The stability granted by the euro, the protection against currency speculation and the benefits of low interest rates are universally acknowledged,” she says.

There are other practical reasons for doubting that any country will exit the EU, says Graham Bishop, a London-based independent consultant involved in the preparatory work for setting up the single currency. He points out that it took three years to put the euro infrastructure in place—such as installing new slot machines for public transport. These could not be changed back overnight. Any switch back to a national currency would also give that country’s citizens a risk-free windfall. Knowing the new currency would trade at a lower value, they would immediately be tempted to withdraw their euros, put them on deposit with a foreign bank and then convert back into the new domestic currency at a better rate.

“Without capital controls, it would devastate a country’s banking industry,” says Bishop. It’s reasons such as that which have believers in the euro project hoping the current upsets are just teething troubles.


While it has prompted a whole rash of hand wringing, the recent crisis might not, in fact, spell the demise of the EU and all its stands for. In the turmoil left in the wake of the twin “no” votes, optimists are finding the opportunity to inject new vigor into the reform process. “Rejection of the treaty should be treated as an opportunity rather than a threat,” says Sally McNamara, European Union project director for the American Legislative Exchange Council, a Washington, DC-based association of state legislators. “An opportunity for Europe to address the high-tax, low-growth environment that has stifled the mainland economy for so long.”

Reformers are pinning their hopes on a new generation of politicians. French President Jacques Chirac’s term ends in less than two years, and it is likely he will be replaced by the dynamic Nicholas Sarkozy. In Germany federal elections this September look almost certain to usher in a new right-wing government under Angela Merkel. Merkel, a 50-year-old woman from the former East Germany, certainly breaks the mold and has talked of the need to make painful adjustments. She may not prove quite the ally that Britain’s Tony Blair hopes she may, though.

“Merkel is no Thatcher,” says Derek Scott, a former economic adviser to Blair, referring to the British Premier who fought unions, tore up labor laws and sold off state companies. Scott points out that Merkel’s coalition partners are the CDU, the Catholic party, which rules Bavaria. While largely pro-business, the party has a strong commitment to the social safety net that has surrounded Germany’s citizens since the 1960s. And Sarkozy, while a reformer, has a strong streak of old-style Gaullist statism running through his thinking. Anglo-Saxon reformers, it seems, may be lonely for some time to come.