Features : The Beginning Of The End Game

July 01, 2005
Author: Anita Hawser
Countries that have failed to reform their labor markets will soon find they have no choice but to bite the bullet. 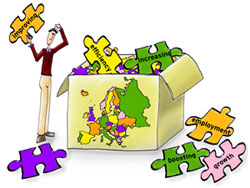 One only has to look at the newspaper headlines splashed across the business pages of European newspapers these days to realize that something is amiss in the state of Euroland. With France and the Netherlands saying “no” to the proposed EU constitution, which saw the euro tumble to its lowest levels against the US dollar in months, it wasn’t long before headline writers posed the question, “How long can the euro last?” Comments by Italian welfare minister Roberto Maroni that Italy should return to the lira hardly helped and prompted some observers to contemplate the unthinkable: the exit of countries from the euro.

Maroni, like many other euro-skeptics, blames poor economic growth, lack of competitiveness and high unemployment on the lackluster performance of the euro. And with the aftershocks of the “no” vote still resounding across the market, stockbrokers also indulged in a spot of speculation, with UK-based stock brokerage company Charles Stanley Sutherlands postulating that by 2020 complete collapse of the eurozone was “inevitable.”

Economists, however, maintain that the costs of leaving the euro far outweigh the benefits. “If Italy were to leave the euro today and devalue by, say, 15%, this would come at the cost of significantly higher interest rates, placing an additional burden on the already very weak Italian public finances,” says Michala Marcussen, head of strategy and economic research at SG Asset Management. Paul Mortimer-Lee, global head, market economics, BNP Paribas, says the legal issue associated with countries’ quitting the euro would make the cost of exiting extremely high. He concludes that there is little probability of a country leaving the euro.

The eurozone countries, particularly the larger economies—France, Germany and Italy—have their share of problems. When compared with faster-growing economies such as China and India, the eurozone has certainly under-performed. A Centre for Policy Studies (CPS) paper entitled “Four Economic Blocs,” published in February this year, points out that while China’s economy grew at an annual average rate of 8.25% from 1996 to 2005, India’s at 6%, and the US at 3.5%, the EU-15 grew by less than 2.5%. From 1996 to 2005 the “big three” eurozone economies grew at an average rate of 1.6%, compared to the UK, which grew by 2.7% (see table). Economic recovery within the EU remains sluggish, with the OECD predicting that growth would slow from 2% in 2004 to 1.25% this year.

Economic growth rates also diverge greatly across the eurozone and the “big three.” The German economy appears to be emerging from a difficult economic period, reporting growth of 1% in the first quarter of this year (up from -0.1% in the fourth quarter of 2004), according to Eurostat. At the same time, the Italian economy skidded into “technical recession,” with first-quarter growth of -0.5% compared to -0.3% in Q4 last year. EU ministers have expressed concerns at the divergent growth rates within the EU, but Rolf Elgeti, head of European equity strategy at ABN AMRO, says it is not cause for concern. “If you look at the US, there are huge divergences in growth and inflation between the various states,” he says.

Perhaps what is more symbolic of the “sickness” that pervades the major eurozone economies is the high rate of unemployment—10.2% in France, 11.8% in Germany and 8% in Italy. In its 2005 Economic Outlook, the OECD predicts that EU unemployment will remain high, at 8.5%. Another bone of contention, at least among consumers, is that the euro has fueled higher prices in the eurozone. Inflation has remained above the European Central Bank’s (ECB) target of 2%, rising to 2.5% in May last year. Rising oil prices have also taken their toll. “Ask the man in the street, and he will say the problem with the euro is that when it was introduced, the price of a number of everyday goods across the eurozone increased significantly,” says SG’s Marcussen. “Some people feel their standard of living [post-euro] has declined.”

The Italian Job
Historically, trade unions were firmly entrenched in the “big three” eurozone economies, but recent deals negotiated by German companies such as Siemens and Volkswagen to extend the working week to 40 hours without any additional compensation have shifted the goalposts. Italian companies, however, have not been as aggressive as their German counterparts when it comes to cutting labor costs. “For Italy it will be a cultural shock,” says Elgeti “as companies there are operating in the wrong sectors, and one could argue that, without the euro, circumstances could be much worse for Italy.”

BNP Paribas’ Mortimer-Lee says that a major competitive gap has opened up in Europe. Citing EU Commission figures, he says that between 1995 and 2004 German manufacturing productivity improved by more than 42%, compared to an improvement of only 6% in Italy. “An important part of Italy’s exports are textiles, clothing and shoes, all of which compete with lower cost countries such as China and Central and Eastern Europe,” he says. “A lot of Italian firms are smaller in size so the scope for R&D; to improve productivity is fairly limited.”

Pointing to the example of Germany, which instituted sweeping labor market reforms (see box), Marcussen says Italy has to go through a similar, difficult period of reform to get the economy back on track, which could see unemployment and general economic conditions worsen before they get better. “The benefit of structural reforms is seen in the long-term; however, short-term the implications are often negative,” she says.

Germany has certainly led the way in terms of structural reforms within the “big three” economies, although arguably more still needs to be done. France, on the other hand, is at the “halfway” mark, says Marcussen, commenting that recent measures in terms of reforming the pension system and privatization were largely positive but that labor market reforms did not go far enough. The 35-hour working week is enshrined in French law, which Marcussen says has introduced some flexibility, as wages have not risen for several years. “The 35-hour week is not a hindrance to labor reforms,” she says, “but it hasn’t helped create new jobs.”