Aéroports de Paris, the state-owned operator of the airports serving the French capital, launched its long-awaited initial public offering last month, despite the biggest decline in European stock markets in the past three years.
The company planned to raise more than $1.5 billion, placing 30 million shares to pay down debt and help fund a four-year investment plan. About 10% of the shares were to be reserved for the company’s employees. The French finance ministry said the issue was clearly oversubscribed a week ahead of its scheduled debut on Euronext Paris on June 16. The government was set to reduce its 100% stake in the airports operator by about one-third.
Credit Agricole’s investment banking unit Calyon, Citigroup, HSBC Holdings and Morgan Stanley managed the IPO, which was the biggest in France since Électricité de France’s $8.5 billion offering in November 2005. The sale of shares in the electric utility was the biggest IPO in the world for the past five years.
Charles de Gaulle airport in Paris has overtaken Frankfurt airport as the second busiest in Europe as measured by revenues, following London’s Heathrow airport. Aéroports de Paris plans to spend about E2.7 billion by 2010 to renovate its older facilities and build new terminals to increase its passenger-handling capacity. It handled about 78.7 million passengers last year, and its earnings rose about 25%. The company operates 14 airports in and around Paris, including Charles de Gaulle, Orly and Le Bourget.
BAA, which owns and operates London’s Heathrow and six other airports in the UK, agreed last month to a $12.8 billion offer from Grupo Ferrovial, a Spanish construction company, and turned down a $13.8 billion competing bid by a Goldman Sachs-led group.

Despite the recent decline in global markets amid fears of rising interest rates and a potential slowing in global growth, Europe’s equity capital markets are growing rapidly. As of June 9 a total of nearly $111 billion in equity capital was raised through 588 deals in the year-to-date period for Europe, the Middle East and Africa, or EMEA, according to Dealogic. That was an increase of 35% from $82 billion via 559 deals in the same period a year earlier and was the highest year-to-date total on record for the region.
The volume of initial public offerings of $31.2 billion from 195 deals was the highest year-to-date total since 2000 and was up 75% from the same period of 2005, Dealogic says. Analysts say Europe’s IPO boom could in part reflect stricter reporting and governance rules in the United States, which are causing a shift in foreign listings away from New York and toward the less-regulated markets of Europe. Another partial explanation is the large number of privatizations in Europe.
BNP Paribas’ $6.5 billion rights issue, managed by Goldman Sachs and BNP Paribas, was the largest equity capital market transaction so far this year, according to Dealogic. The French bank’s one-for-10 rights issue was designed to partially fund its purchase of Italy’s Banca Nazionale del Lavoro, or BNL.
BNP Paribas, which already owned more than 97.5% of the Rome-based bank’s shares, was scheduled at the end of June to launch a buyout offer for the remaining shares, following which BNL will be de-listed from Milan’s stock exchange.
Equity capital market issuers from the United Kingdom accounted for 19% of the volume share so far this year, followed by France with a 13% volume share and Germany with a 12% share for the EMEA region, according to Dealogic. South Africa was the biggest non-European issuer in the region, with a 3% market share by volume.


While the pullback in global markets could delay or deter some IPOs, European money managers remain positive and continue to seek out domestic opportunities, according to a survey released on June 13 by David Bowers, global equity strategist at Merrill Lynch, who is based in London. “Our regional surveys reveal a significant setback to growth expectations in line with our global Fund Manager Survey,” he said in the report. “However, there were some significant regional variations.”
European regional managers were still confident of positive growth surprises, with a net 50% of 120 respondents expecting a stronger economy in the next 12 months. Some 55% said they believed that European equities were undervalued. Oil companies, insurers and industrials were the sectors most widely favored, while utilities, travel and autos remain out of favor.
The bad news, from a global perspective, Bowers says, is that nobody knows the extent to which central banks around the world will choose to dampen down growth in order to deal with any inflation threat. It is possible that monetary policy may remain tight this year, even as the global economy slows, he says. In this case, there may be more negative growth surprises to come, he says.
“The good news in the short term is that there appears to be sufficient liquidity and sufficient pessimism to trigger a rally in markets should the inflation threat recede for even a moment,” according to Bowers.

Falling stock prices won’t delay the pending IPO of Rosneft, Russia’s state-owned oil firm, says Alexander Zhukov, the country’s deputy prime minister. On June 13, a day after the Russian stock market plunged by more than 8%, Zhukov told reporters that market conditions would not delay the IPO, which is now expected in late July, following the summit of the Group of 8 industrialized nations in St. Petersburg.
Rosneft in June formally announced its intention to float shares in what will be one of the biggest IPOs of 2006. Bankers are forecasting that the issue for Russia’s third-largest oil company will total about $10 billion.
Rosneft’s shares will be listed on the London Stock Exchange and on Russia’s two main bourses. Morgan Stanley, JPMorgan, ABN AMRO and Dresdner Kleinwort Wasserstein are organizing the sale.


While the prospect of an interest rate rise in Japan and a higher appetite for risk among Japanese investors are putting an end to the yen-carry trade in dollars, the situation is different in the case of the yen versus the euro, says Diana Choyleva, director and head of the UK service at London-based Lombard Street Research.
The yen has weakened against the euro, while the expected interest rate rise in Japan may not materialize this year, she says. “Global liquidity is still ample and may flow to euro assets, in particular real estate,” Choyleva says.
As of early June, the yen had declined 5% against the euro since the end of last year. Therefore, euro-based investors now have access to an even cheaper source of finance, according to Choyleva. “While we believe the Japanese economy will do well even in the face of weakening Sino-US growth, Japanese policymakers are scared of making the same mistake for a third time and raise rates too soon, aborting the recovery,” she says.
And while stock markets around the world are in for a tough time in coming quarters, the savings glut in Europe and Asia is unlikely to go away, Choyleva says. Debt-financed real estate deals in Europe could be supported by cheap Japanese money, she says.
The success of Germany-based real-estate company Patrizia Immobilien’s $494 million IPO earlier this year, which was 10 times oversubscribed, could encourage more equity-issuance activity in the sector.

Meanwhile, the oil and gas sector in the US is setting records for equity capital market issuance. As of June 8, volume in the sector totaled $9.5 billion through 27 deals in the year-to-date period, up 32% from $7.2 billion in the same period of 2005 and the highest year-to-date volume in the industry on record, according to Dealogic.
The volume of initial public offerings in the oil and gas sector totaled $3.3 billion through eight deals, the highest level on record for the year to date and almost six times higher than in the same period of 2005.
Lehman Brothers leads the US equity capital market bookrunner rankings with a 27% market share year to date, followed by Citigroup with a 23% share, according to Dealogic.

Royal Bank of Scotland, the UK’s second-largest bank, raised $675 million on May 25 through the placement of 27 million American depositary receipts representing preference shares. The preference shares are traded in the US through a New York Stock Exchange-listed ADR program, with The Bank of New York as depositary and paying agent.
Husqvarna, the world’s largest producer of chainsaws and lawn mowers, which was spun off from Sweden’s Electrolux, selected The Bank of New York as depositary for its Level I ADR program. The company is also one of the largest producers of garden tractors, as well as cutting equipment for the construction and stone industries.
The Bank of New York also announced that Nippon Yusen Kabushiki Kaisha, parent company of a Japanese group engaged in maritime transportation and logistics, updated its unsponsored depositary receipt program to a sponsored program. The company’s ADRs, which are equivalent to two common shares, trade in the US over-the-counter market.
While Japan-based companies are among the largest ADR issuers, with approximately 150 ADR issues in the US market, most of these issues are unsponsored and are not listed on any exchange.
In other ADR news, JPMorgan was appointed as successor depositary for the NYSE-listed program of United Utilities, a UK-based company that distributes electricity and water and removes wastewater. It also provides communications services to business customers. One ADR is equivalent to two ordinary shares. 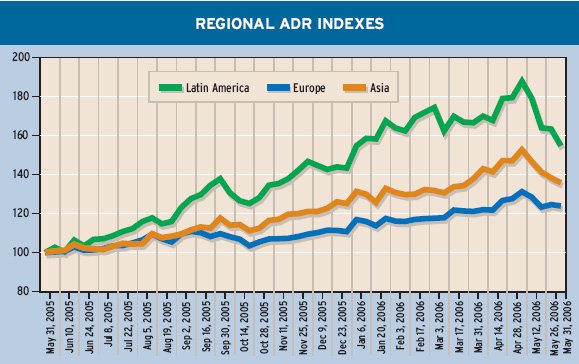 This article appeared in issue July/August 2006