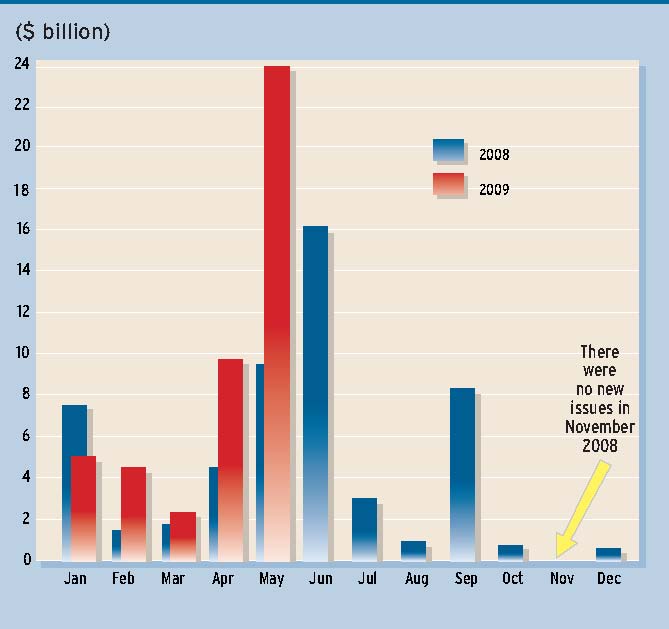 Companies rushing to refinance bank loans borrowed more than $24 billion in the high-yield debt market in the United States in May, the most since November 2006, according to Montpelier, Vermont-based KDP Investment Advisors.

Many of the companies increased, and even doubled, the size of planned offerings to take advantage of the strong appetite for risk in a market that had been completely shut down in November 2008, at the depth of the credit crisis. While speculative-grade companies are paying high rates to tap the market, they are extending the maturity of their outstanding debt and gaining breathing space at a time when corporate default rates are rising.

Strong investor demand for high-yield bonds continued even after General Motors filed for Chapter 11 bankruptcy protection on June 1. GM's bankruptcy filing was the largest ever for an industrial company. The automaker said it had $173 billion in debt and $82 billion in assets.

Corporate refinancing needs are set to rise sharply in the period from 2011 to 2014, when nearly $1.3 trillion of high-yield debt will come due, according to Standard & Poor's. "Even if credit markets improve significantly in the next year or two, higher refinancing needs in the early 2010s could create a gross supply glut that outpaces investor demand," the rating agency said in a report.

Mining company Teck Resources, casino operator Harrah's Entertainment, Warner Music and pay-as-you-go mobile phone company Leap made the biggest private placements of high-yield debt in the US market in May, according to KDP Investment Advisors.

Warner Music more than doubled the size of its planned debt issue to $1.1 billion, and Moody's upgraded the company's credit rating. Proceeds from the private placement, made through subsidiary WMG Acquisition, were used to pay off a secured credit line.