Sukuk issuance is rebounding as investor confidence returns to the GCC region.

The global financial crisis has accelerated what already was a growing interest in Islamic finance and has created new opportunities for Islamic financial institutions as a result of problems in the conventional banking system, bankers say. "The financial crisis is creating opportunities from two sides," says Emad Al-Menaie, chairman and managing director of Liquidity Management House, which is owned by Kuwait Finance House. "First, there is an ongoing return to basics in financial arrangements, with demand for transactions backed with the appropriate assets, which is a hallmark of Islamic finance," he says. "Bankers are looking more closely into the operating side of the businesses they finance and the capacity of their customers to produce the right revenues for a particular financial obligation," Al-Menaie explains. "Second, investors are attracted to Islamic financial instruments because of their income-generating ability and capital appreciation," he says.


Kuwait Finance House, the largest Islamic lender in Kuwait, established Liquidity Management House in January 2008 to issue, purchase and trade sukuk, equivalent to Islamic bonds, with the goal of creating a global secondary market. "The recent issuance of sovereign sukuk issues by Bahrain and Indonesia as well as the introduction of new global investment funds show that the market for sukuk is capturing momentum again," Al-Menaie says. "The more players there are, the more opportunities there are for trading," he adds.


European Finance House, the London-based affiliate of Qatar Islamic Bank, announced the launch of its open-ended Global Sukuk Plus fund in May. The dollar-based fund is actively managed and offers weekly liquidity. "The sukuk market is now a global phenomenon," says Mark Watts, head of asset management at European Finance House. "The global sukuk fund allows investors to tap into returns and profits not previously available, as the scale and diversification of investment have increased," he explains.


The fund is predominantly invested in sukuk, comprising sovereign, quasi-sovereign and corporate issuers. Value could be added through investment in shariah-compliant debt or credit investments, such as syndicated murabahah (a form of cost-plus-fee financing), trade finance and structured investments.


Islamic financial institutions have weathered the global financial crisis reasonably well, says Ala'a Al-Yousuf, London-based chief economist at Gulf Finance House. The vast majority of shariah-compliant institutions have been conducting their business in a conservative manner, and they avoided credit derivatives and other complex structured assets that turned toxic for conventional banks, Al-Yousuf says. "Islamic principles require the structuring of financing facilities as profit-sharing agreements," he notes. "As a result, the lender needs to fully understand the business of its customers," he says.


Bankers in general need to relearn a lot of lessons about sound banking that they may have forgotten, according to Al-Yousuf. "They need to go back to basic tenets of finance and not forget the fundamentals of credit analysis and knowing your customer," he says. 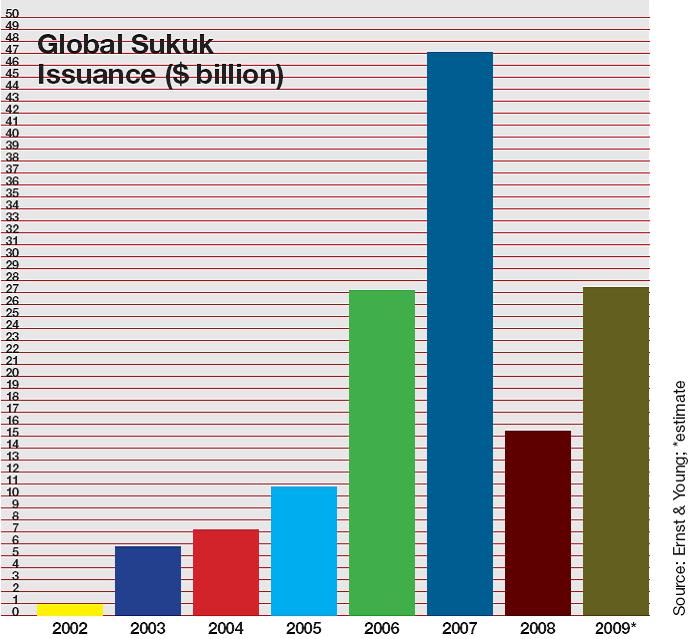 Avoiding Smoke and Mirrors
"The explosion of credit default swaps and similar slice-and-dice credit techniques in conventional banking was a smoke-and-mirrors charade that undermined the Basel capital-adequacy requirements because there was no link to the ultimate lender," Al-Yousuf says.


Bahrain, with its strong regulatory regime, has emerged as the global capital of Islamic finance, according to Al-Yousuf. "Bahrain has the largest concentration of Islamic financial institutions in the Middle East," he says. Bahrain's sale of a sovereign $750 million five-year sukuk in June, which was increased from an originally planned $500 million, attracted strong demand from investors. "The sukuk market is showing new signs of activity," Al-Yousuf says. "Borrowers need to tap liquidity while rates are still low, and investors are seeking a safe harbor. There are opportunities for both sides," he says.


The issuance of sovereign sukuk will help to further develop the yield curve for shariah-compliant issues and will encourage corporations to tap the market and enable the development of secondary trading, Al-Yousuf says. "Islamic financing is a practical and pragmatic business," he says. "Innovation comes through transactions, as opposed to discussions in theological seminaries. The more issues there are, the more the structure will evolve," he adds.

This new issuance in the Gulf is one more sign of a marked return of investor confidence in the region, according to a report by Standard Chartered. In April Abu Dhabi issued $3 billion of five-year bonds with a 4% coupon, and the subscription was a huge success, the UK-based bank says. Qatar's issuance of a similar $3 billion bond was similarly well received.


Growing risk appetite from offshore investors has helped strengthen regional bond markets, according to Standard Chartered. "Not only will this help regional governments fund their economic diversification ambitions, but it will also contribute to the much needed deepening of the debt capital markets and the gradual building of a yield curve," the bank says.


In Saudi Arabia the Capital Market Authority announced in June that it would set up a market for debt securities, including sukuk, on the Tadawul exchange. Although no target date was given, the exchange already has developed the infrastructure to operate the market, with trading to be done through licensed intermediaries.


While investors globally hold more than $1.5 trillion in shariah-compliant investments, there is a need to create adequate regulation for Islamic investment instruments, says Abdul Rahman Al Baker, executive director of financial supervision at the Central Bank of Bahrain. "It is important to adopt proper corporate governance in the Islamic investment industry in order to improve the confidence of investors," he told a conference in Bahrain in May. "This includes having proper disclosure requirements, including adequate disclosure of all terms and conditions of Islamic products, as well as transparency in disclosing financial information and indicators," he says.


There are more than 500 funds globally that comply with Islamic principles, of which one-third were created in the past two years, according to Al Baker. The standardization of Islamic investment and instruments is the most vital component for boosting the growth of the industry, he says. This will reduce transaction costs and make it easier for more international institutions to participate in the industry, he says.


Last year, the Bahrain-based Accounting and Auditing Organization for Islamic Financial Institutions formally ruled that a popular form of sukuk structure was not shariah-compliant. Combined with the credit crunch, this had a double-barreled effect in suppressing sukuk issuance in 2008, bankers say.


"Islamic jurisprudence is not homogenous, and fatwas [religious rulings] are not bound to precedents, hence the lingering uncertainty on the validity of some contracts or structures impairs the establishment of standards," says Nasser Saidi, chief economist at the Dubai International Financial Center. Successful sovereign bond issues would contribute to establishing a regional yield curve and form the basis for an increase in corporate bond issuance in the region, he told a conference at the DIFC in May. Deeper bond markets in local currencies allow small, open economies to better absorb volatile capital flows, he says.