Europe's seemingly intractable sovereign debt crisis has triggered a flight to safety among investors, who are shunning bonds of lower-rated companies despite some very attractive yields in a low-inflation environment. Analysts say the high-yield market will remain inactive for an extended period until risk appetite improves.

US high-yield bond issuance plummeted to $5.85 billion in May from $27.83 billion in April and a record $38.52 billion in March, according to Montpelier, Vermont–based KDP Investment Advisors.

"March and April were the number-one and number-two months ever for US high-yield new-issuance volume," says Kingman Penniman, president of KDP. "May was a very slow month by comparison."

There were no signs of improvement last month, with only $2 billion of new issues coming to market through June 15 and a forward calendar that was nearly empty. "Spreads have widened and yields have increased, while investors and issuers have gone to the sidelines," Penniman says. "The high-yield market will remain slow for some time." Even the more opportunistic buyers are on strike, he says.

Lazy Days of Summer
The summer months are normally a slow period for the market anyway, Penniman says, but this year they will be even slower than normal. "The market has given up all of its price gains for the year, and there have been a lot of cash withdrawals," he says.

High-yield bond funds worldwide posted their fifth consecutive week of outflows during the first full week of June, according to Cambridge, Massachusetts–based EPFR Global, a research firm that tracks fund flows and asset allocation. Ironically, this retreat from the market came at a time when the default rate for high-yield bonds continued its recent decline from a global average of about 10% in late 2009 to 7.5% in May, the firm says.

Penniman says the sudden slowdown in the high-yield market was caused mainly by the debt problems in Europe. "There is a great deal of concern about the banks in Europe and the paper they are holding," he says. In addition, there is worry that the austerity measures in Europe and a possible slowdown in China could undermine the global recovery, he adds. There are also questions about the sustainability of the US recovery and the effect of future financial reforms, he says. "And the oil spill in the Gulf [of Mexico], which is the worst in US history, also could have an impact on confidence," Penniman says.

The Pain in Spain
Francisco Gonzalez, chairman of BBVA, Spain's second-largest bank, said last month that problems with Spain's sovereign debt were hindering the ability of companies and financial firms in the country to borrow. "If the Spanish state has difficulty financing itself outside Spain, then the difficulties will be even greater for those in the private sector," Gonzalez said. "For the majority of companies and Spanish financial firms, international capital markets are closed."

The yield spreads of corporate bonds in Europe compared with government bonds should stabilize later this year, as the threat of contagion from the sovereign debt crisis subsides, Moody's Investors Service says in a report by its European staff. Investors will refocus on underlying improvements in credit fundamentals, it says.

The investment-grade corporate debt market and bank loans have fared better than speculative-grade debt amid the flight to quality. "Refinancings of both bonds and leveraged loans will be among the primary drivers of bond issuance in 2010," says John Lonski, chief economist at Moody's Capital Markets Research Group. Some companies are borrowing now in anticipation of higher funding costs down the road if the global recovery stays on track.

A growing number of bond offerings are designed to fund acquisitions, Lonski says. And both leveraged loan issuance and the use of commercial paper are likely to recover significantly during 2010's second half, he says. Proposed changes in bank regulation, however, are adding to uncertainty in the markets, he adds.

Banks Pass Stress Tests
Moody's conducted its own stress tests of 30 major European banks and concluded that most would be able to absorb losses stemming from their exposure to Greece, Portugal, Ireland and Spain without requiring capital increases, even under a severe stress scenario. "This is not to say that European banks are immune against a systemic crisis, the magnitude of which is impossible to predict," says Jean-Francis Tremblay, vice president and senior analyst at Moody's. "However, with the exception of a few outliers that already suffer from a weaker-than-average regulatory capital level (and thus low ratings), the banks that we examined as part of our analysis have adequate capital cushions to absorb losses, even under harsh economic conditions," he says.

While Moody's expects the debt crisis to subside later this year, Standard & Poor's warns that some lower-rated companies could be caught in a debt trap as borrowing costs rise over the next few years. US nonfinancial corporations have more than $1.7 trillion of bonds and loans coming due from 2011 through 2014 and may face difficulties in refinancing this wall of debt, S&P; says.

"Unlike investment-grade entities, for which the main issue is the rising cost of capital, speculative-grade borrowers may find that financial institutions and investors are wary of lending to them," says John Bilardello, S&P; managing director. "We believe that many borrowers at the low end of the ratings scale will encounter serious hurdles to their refinancing needs in 2013 and 2014," he says.

S&P; expects maturing US corporate debt to peak at more than $550 billion in 2014, with high-yield borrowers accounting for 72% of the total. "While many companies shored up their balance sheets and took advantage of favorable rates and accessible credit markets earlier in the year, we don't really expect speculative-grade companies to enjoy a broad, sustained improvement in credit quality," Bilardello says.

A narrowing trend for the high-yield bond spread requires an extended climb by revenues and enhanced access to financial capital, according to Moody's Lonski. "Occasional broadenings of the high-yield spread in response to European issues are likely," he says. Once the private sector is capable of sustaining economic growth, the high-yield bond spread should begin to approach its 473 basis points average of the past two economic recoveries, he says. That would reflect a narrowing of about 200 basis points from its recent level. Meanwhile, market volatility is curbing companies' efforts to borrow, particularly for companies with less than stellar credit ratings. 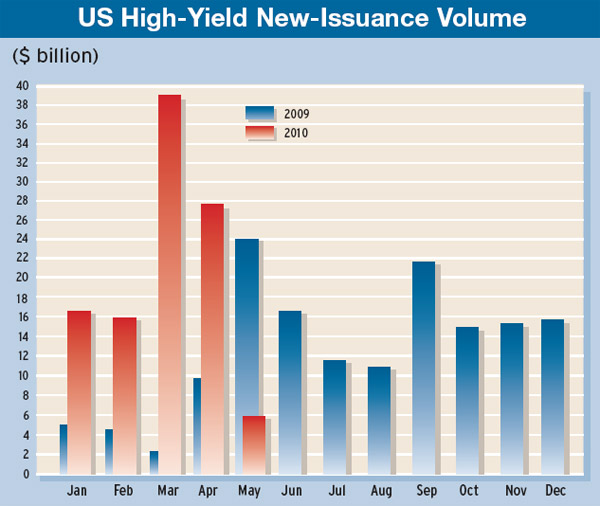 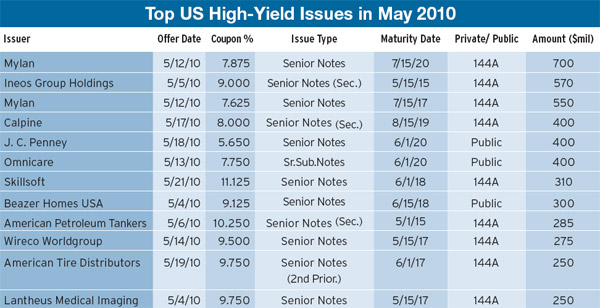