Agricultural Bank of China (AgBank) began marketing operations last month for what could be the biggest initial public offering in history, despite turbulent market conditions that caused a raft of companies to scrap plans for IPOs in Hong Kong.

AgBank, the last of China's so-called Big Four lenders to list shares, scaled back the size of the IPO to about $23 billion from an originally planned $30 billion. If the underwriters exercise all of their over-allotment options, the IPO, dual-listed in Hong Kong and Shanghai, could reach $27 billion. That would place it significantly ahead of the current record $21.9 billion IPO of Industrial and Commercial Bank of China in 2006.

The sale will provide lucrative advisory fees to the underwriters, including Goldman Sachs, Morgan Stanley, J.P. Morgan, China International Capital Corp (CICC), Deutsche Bank and Macquarie, which are handling the H-share portion of the IPO in Hong Kong. CICC, Citic Securities, Galaxy Securities and Guotai Junan Securities are leading the A-share part of the offering in Shanghai. Trading of AgBank's shares is scheduled to start on July 15.

Despite some concerns over the quality of AgBank's loan portfolio and the future profitability of its operations, which focus on making loans to poor farmers in rural areas, the IPO seems likely to be a relative success. Wealthy Hong Kong tycoons, sovereign wealth funds from the Middle East and Asia and other cornerstone investors are expected to take up to 40% of the Hong Kong portion of the IPO before the public offering begins. China Life Insurance, the country's biggest life insurer by premium volume, will also subscribe to the IPO, according to the company's chairman, Yang Chao. "We see strong synergy between us and Agricultural Bank, as our network of outlets is quite similar," Yang told a press conference in Beijing last month.

Standard Chartered, a UK-based bank that is active in emerging markets, signed a strategic cooperation agreement last month with AgBank and could also be a cornerstone investor. "The partnership will focus on the increasingly strong intra-Asia and Asia-Africa trade corridors, while also looking at joint opportunities across Agbank's and Standard Chartered's domestic Chinese market operations," the banks said in a statement.

Standard Chartered is the second global bank to form an alliance with AgBank in the run-up to the IPO. Rabobank, based in the Netherlands, was the first. Like AgBank, Rabobank is a major agricultural lender. It is also expected to invest in the IPO.

AgBank is selling a 15% stake to shore up its capital base and raise funds for future growth. The government pumped $19 billion into AgBank in 2008 through the domestic arm of China's sovereign wealth fund. The finance ministry also spun off $120 billion in nonperforming loans as a first step in preparing AgBank for its public offering.

China has been the biggest source of IPOs globally so far this year, raising $29 billion from 158 renminbi-denominated deals, or A-shares, according to Dealogic. Hong Kong has raised $6 billion from 22 IPOs.

Meanwhile, China's stock market was down 22% for the year to date through mid-June, amid worries about the global economy and China's own efforts to dampen speculation in the domestic property market. In the long run, however, investors remain bullish about the prospects for economic growth in China and elsewhere in Asia to outpace growth in the Western industrialized world.

JPMorgan Chase last month announced a joint venture with First Capital Securities, a state-owned, Shenzhen-based brokerage. The joint venture, subject to regulatory approval, will be allowed to underwrite IPOs on the mainland but not to trade in China's secondary market. The New York–based bank will hold a 33% stake in the new company, which is the maximum stake foreign firms are allowed to hold in securities firms in China. 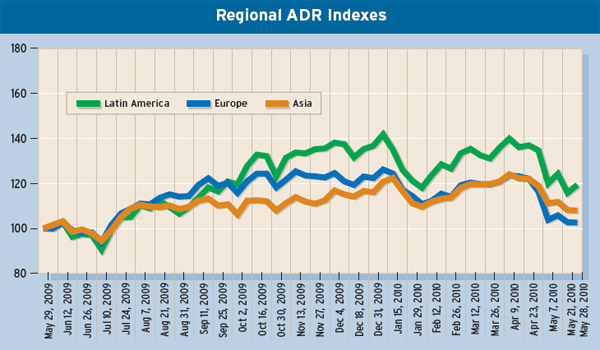