Ukraine’s recovery appears impressive, but structural cracks remain that could derail it. 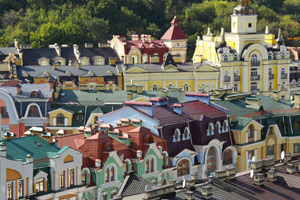 At first glance, Ukraine appears to be in fine health. Having been at risk of collapse in the first stage of the financial crisis in 2008 and early 2009, its economy is now growing strongly, thanks both to a $15.2 billion International Monetary Fund (IMF) stabilization program put in place in July 2010 and to strong commodity prices (60% of Ukraine’s total exports are commodity-related).

“GDP growth in the first quarter of 2011 was about 6%,” says Anastasiya Golovach, regional macroeconomist at Renaissance Capital. Internal demand has increased, with retail sales and capital investment both 12% higher year-on-year in the first quarter, and higher commodity prices are boosting industrial production. “We expect 5% GDP growth for the full year,” adds Golovach.

Moreover, Ukraine’s current account deficit, which was 7.4% of GDP in the fourth quarter of 2008, more than halved to less than 3% in the fourth quarter of 2010, according to Alexander Perjéssy, senior economist at AllianceBernstein, a research-driven investment firm with assets under management of $485 billion in April. In addition, the IMF-sponsored fiscal austerity measures ensured that Ukraine’s government deficit was stabilized below 6% last year, while the 2011 budget projects that the deficit will fall below 4% this year.

Meanwhile, the election of Viktor Yanukovych as president in 2010 has delivered the political stability that has been lacking for much of the past six years: The Party of Regions has consolidated substantial power after wresting de facto control of the constitutional court from the opposition, according to Frank Gill, credit analyst at Standard & Poor’s: “For the first time in five years, the president and prime minister belong to the same political party.”

The most recent major reduction in the sovereign risk premium occurred after Ukraine’s presidential election early last year, agrees Perjéssy. “This removed the political instability that had been an additional source of uncertainty for the country—acutely so during 2009 and more generally since 2004.” In early June, Ukraine’s sovereign risk premium—measured by five-year credit default swaps—was just 443 basis points compared with a peak of over 4,000 basis points at the height of the financial crisis.

A closer analysis of Ukraine’s situation reveals economic and political problems that could have long-term negative consequences for the country. For example, Ukraine has a pension crisis of vast proportions, with pension spending currently standing at 18% of GDP. According to Standard & Poor’s, this is among the most onerous pension expenditure levels in the world, exceeded only by Italy’s. UN projections indicate that the working-age population will decline from 71% of the total population in 2010 to 59% by 2050, adding as much as another 11% of GDP to Ukraine’s pension bill.

At the same time, Ukraine’s large and crisis-hit banking system remains in distress, according to Fitch. Fitch estimates average problem loans were a crippling 50% of the total in June 2010 and says that the recapitalization program has been opaque and subject to delays. Fitch recently described structural reform for the banking sector, along with pensions and the energy sector, as “significant challenges.” It added: “Fitch believes significant risk remains associated with asset quality in the banking system.”

Politically, despite having had six governments since the Orange Revolution of 2004, Ukraine has become steadily less democratic. Numerous opposition politicians have been arrested in recent months, and there are serious concerns about the impartiality of its courts. Gill at Standard & Poor’s says that Ukraine’s institutions are now less independent than in the past and that while this may deliver political stability, it will likely also render elected governments less, rather than more, accountable to voters.

Such unaccountability is worrying, given Ukraine’s troubled post-Soviet history of corruption and poor public services, particularly in the health and education sectors. It also has negative implications for Ukraine’s economic health. “One consequence of poor public service delivery is that it reinforces Ukraine’s widespread culture of tax evasion,” says Gill. Taxpayers are less inclined to pay taxes if the quality of health and education provided by public institutions is perceived to be declining.

Paradoxically, despite the evidence of weakening democratic institutions, it is politicians’ unwillingness to make unpopular decisions that is hampering reform. “To shed its boom-and-bust status and reduce its high sovereign-risk premium, the country has to get back on a vigorous reform track,” says Perjéssy. “Yet Ukraine’s policymakers now seem to be losing much of their reform momentum.”

During the crisis, the main challenge was financing the deficit relating to pensions and the cost of gas, which is heavily subsidized. “In line with the terms of the IMF loans last year, the government aims to reduce structural imbalances by increasing gas tariffs and reforming the pensions systems,” says Golovach at Renaissance Capital. “To date, almost no progress has been made in either area.”

Part of the explanation for the government’s failure to address these problems is that it has enjoyed a favorable change in its finances as revenues have increased. “There have been improvements in administration and taxation collection, which have helped to bring part of the black economy—which represents 40%-50% of the Ukrainian economy—into the legitimate economy,” says Golovach.

Moreover, she notes, parliamentary elections are due in the autumn of 2012, so there is a reluctance, at the moment, to make difficult decisions. “As a result, the government has re-negotiated with the IMF for a more gradual increase in gas prices for households. Pension reform plans are currently being held up in parliament. “But given the crucial importance of the IMF loan for strengthening foreign reserves and investment sentiment,” she says, “we believe Ukrainian authorities will manage to implement this by the end of July.”

Of course, the political environment also has implications for the perception of fairness in business. In March the Austrian investment house Epic completed its $1.3 billion acquisition of 92.79% of Ukraine’s incumbent telecom company Ukrtelecom. Under normal circumstances the deal—the most important privatization in Ukraine’s recent history—would be a welcome injection of expertise and capital. However, when Yanukovych was prime minister in 2004, many state assets were sold to his friends at knock-down prices, and so, perhaps inevitably, Ukraine’s second largest privatization was overshadowed by controversy.

Many people believe that the qualifications to bid for Ukrtelecom were deliberately skewed to clear the field for Epic, which is rumored to be a front for domestic or Russian businessmen. First, telecom groups with a government holding of more than 25% were barred from bidding, ruling out Deutsche Telekom and Norway’s Telenor, which had previously expressed an interest. Second—and perhaps more rationally—any company with more than a 25% market share of the Ukrainian fixed-line telecom was prohibited from bidding. As a result of such onerous conditions, only Epic submitted a bid. It was widely seen as undervaluing Ukrtelecom by about $500 million—money that cash-strapped Ukraine can ill-afford to forfeit.

A Welcome Return For Ukrainian Issuers

The IMF agreement in July 2010 was transformative for Ukraine’s reputation in the international markets. Standard & Poor’s raised its long-term foreign currency ratings on Ukraine by one notch to B+ from B and its long-term local currency rating to BB- from B+. Both ratings were removed from credit-watch.

The Ukrainian government wasted little time in capitalizing on the improvement in its borrowing status. In mid-September the country sold its first international bond since November 2007, with a $2 billion dual-tranche note. Other Ukrainian issuers swiftly followed: PrivatBank, Ukraine’s largest bank, raised $200 million on the same day as the sovereign. A steady stream of banks, such as Ukreximbank; agricultural companies, such as Ukraine’s biggest egg producer Avangard and Mriya Agro Holding; and commodity companies, including the largest wholesale steel-trading company in Ukraine, Metinvest, have since come to market.

In the equity market activity has been more muted, but there were London GDR listings for Avangard in April 2010 and chicken producer Myronivsky Hliboproduct in December, while sunflower seed producer Kernel (April 2010) and dairy companies Milkiland (November 2010) and Industrial Milk Company (April 2011) were added to the burgeoning group of Ukrainian companies listed in Warsaw.