Inmet Mining, a global mining company based in Toronto, placed $1.5 billion of senior notes in the US high-yield debt market to fund a copper-mining project in Panama, in which it holds an 80% interest.

The issue of unsecured eight-year notes was increased from an originally planned $1 billion. It was the single largest high-yield offering in the US market in May, as overall issuance remained subdued and investors sought less-risky alternatives in investment-grade bonds and US treasuries.

In the week ended June 6, high-yield bond funds had their biggest weekly outflow since August 2011, according to EPFR Global. Although $3.6 billion was pulled out of the high-yield funds in the week, net inflows for the year-to-date still stood at $18.5 billion.

Amid worries about a slowdown in the global economy and the debt crisis in Europe, investors are seeking the safety of US and German government bonds. Yields of both countries' bonds have fallen to record lows. "Investors are back to fearing their own shadows and aggressively buying [treasury] bonds and gold," says Brad Durham, a managing director of EPFR Global.

New issuance in the US high-yield bond market totaled $17.7 billion in May, less than half the total for May 2011, according to KDP Investment Advisors.

Inmet Mining plans to develop the Cobre Panama open-pit copper mining project with two South Korean firms, LS-Nikko Copper and Korea Resources, who together hold a 20% stake in the venture. Another South Korean firm, SK Engineering & Construction, already has won the contract to build a 300-megawatt, coal-fired power plant associated with the project.

The Cobre Panama project will take four years to build at a total cost of about $6.2 billion. The property will be developed as a traditional open-pit mine. It will include a processing plant and a port with ship-loading facilities. Work has already begun on upgrading the 25-mile road from the Pan-American Highway to the project site.

Inmet said in a statement that it is considering an additional $1 billion financing based on future gold and silver production related to the copper-mining operation. The mine's annual output is expected to include an average of 266,000 metric tons of copper, 87,000 ounces of gold and 1.5 million ounces of silver. Inmet Mining, which produces mainly copper and zinc, also has operations in Turkey, Finland and Spain.

Most of the other big high-yield issues in the US market in May were related to refinancing outstanding debt, as well as for general corporate purposes. CIT Group issued a total of $2 billion of senior notes in a two-part offering in the public market. CIT sold $1.25 billion of notes due in 2017, and $750 million of notes that mature in 2020. It will use some of the proceeds to refinance notes coming due in 2016 and 2017.

DISH Network, which provides satellite television services, raised $1.9 billion in a two-part private placement via sole bookrunner Deutsche Bank. The Colorado company sold $1 billion of 10-year senior notes and $900 million of five-year senior notes in its first foray into the bond market in a year. 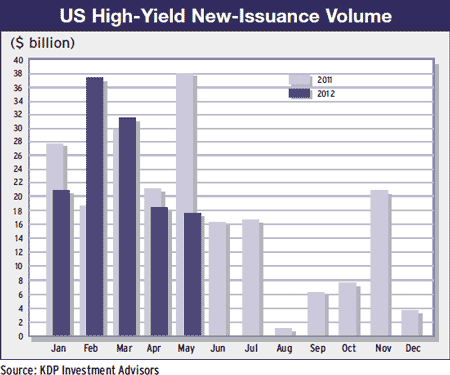