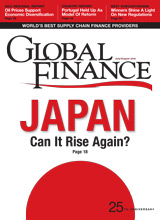 The summer has been alive with global central bank activity—from lower interest rates to new and more creative monetary measures. In the US we have seen renewed talk of quantitative easing and the extension of the Operation Twist debt swap program by the Federal Reserve. The ECB and the Bank of China have cut their interest rates once again. However, in some countries there is no more room to cut rates. In these economies it is well past time to look at unconventional measures to restart growth.

With slow growth in the developed world and borderline recession in Europe, the slowdown is in turn affecting emerging economies that are primarily export-oriented. The catch phrases of the past few months were "growth vs. austerity" and "deleveraging." While European leaders debate the future of monetary union, individual countries like Spain and Italy have launched major austerity initiatives. The European debt crisis is now clearly showing its effects worldwide. As a consequence, even the growth of emerging economies may no longer be capable of counterbalancing the anemic growth of the developed world.

Japan, the subject of our cover story, is particularly germane to discussions of economic revival. The tragedy of the earthquake, tsunami and nuclear meltdown could have created a unique opportunity for robust recovery deriving from the reconstruction of the country's infrastructure. But this has not panned out, at least not so far. Growth is much slower than some analysts expected.

Current economic conditions dictate increasing cooperation and coordination between governments and central banks worldwide. But such cooperation is often contrary to the demands of the court of public opinion—to which every democratic government is subject. No major moves can be expected in countries where elections are imminent, like the US, until the results are in.

The summer months in the West often bring surprises to the financial markets: The smaller number of active participants creates a magnifying effect on the movements of currencies and equity prices. So far, the summer of 2012 has respected that tradition.