Malaysian palm-oil producer Felda Global Ventures priced its $3.1 billion initial public offering near the top of its indicative range on June 13, amid strong demand from investors, who are bullish on the economic outlook for Southeast Asia.

The Felda IPO was the second biggest of the year to date, following the trou -bled $16 billion offering from Facebook in May. It boosted Kuala Lumpur to the leading IPO destina -tion in Asia, slightly ahead of Shenzhen and well ahead of Hong Kong.

The success of the Felda issue, which was due to begin trading on the Kuala Lumpur exchange on June 28, was all but guaranteed by the presence of such major cornerstone inves -tors at the Qatar Investment Authority, Louis Dreyfus, Fidelity Investments and AIA Group, along with a half-dozen local firms, including state-run funds. The cornerstone inves -tors pledged to hold on to their shares in the formerly government-owned com -pany for at least six months. The Malaysian government will still hold a 37% stake in the plantation operator after the listing.

CIMB Investment Bank, Maybank and Morgan Stanley are the joint global coordinators for the listing. J.P. Morgan and Deutsche Bank are joint bookrun -ners. The IPO attracted more than 30 times the amount available for insti-tutional investors.

Felda was formed in 2007 as the commercial arm of the Federal Land Develop-ment Authority, a Malaysian government agency that began operating in the lat-ter half of the 1950s and gave land to rural poor on which to grow cash crops and build their homes. More than 112,600 Malaysian settlers will benefit from a $1.1 billion trust fund, representing 20% of the enlarged share capital of Felda. They will also receive a windfall profit in cash of nearly $5,000 each.

Felda will use part of the proceeds to plant new oil palm trees and to buy fertilizer and expand irri -gation to increase produc -tion. The company's trees are older than the industry average, which means that they yield less.

The apparent success of the Felda deal came at a time when many other IPOs were canceled or delayed as a result of unfavorable market condi-tions and investor distrust in the wake of the Facebook fiasco. Georgia postponed its attempt to list state-owned Georgian Railway on the London Stock Exchange. The company had already completed its road show and set the price range for the offering of global depositary receipts representing 25% of its shares.

In one of the few IPOs to come to market in London this year, Abu Dhabi–based healthcare provider NMC Health raised $187 million in April. Deutsche Bank was bookrunner and global coordinator of the offer -ing. Numis Securities and Shuaa Capital were the lead managers.

Kayak.com, an online travel company, postponed its debut on Nasdaq. For mula One auto racing company delayed an offer -ing in Singapore that could have totaled as much as $3 billion. UK jeweler Graff Diamonds pulled a $1.5 billion IPO that was to take place in Hong Kong. Inner Mongolia Yitai Coal, a Chinese company that planned to raise about $1 billion in Hong Kong, decided not to start book-building for the issue.

The Malaysian equity market is dominated by local investors and has remained somewhat insulated from the volatility in markets around the world. Another Malaysian firm, IHH Healthcare, one of the largest hospital operators in Asia, has lined up cornerstone investors for a dual listing in Kuala Lumpur and Singapore that could raise $2 billion in July. fund and Blackrock are expected to be among the leading investors. The hospital management firm is an arm of Khazanah Nasional, Malaysia's state investor. Gas Malaysia shares rose 10% in their debut on June 11. 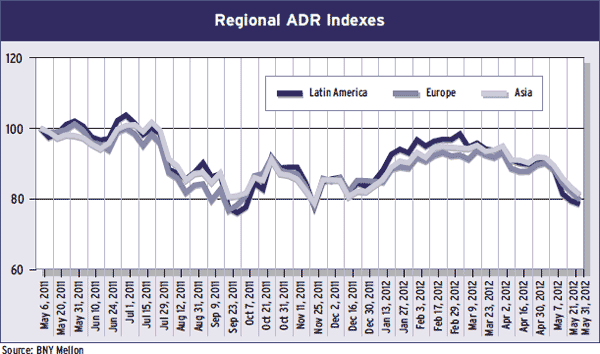