The European debt crisis remains the key focus of foreign exchange market participants, as the slowdown in the global economy increases pressure on central banks and government officials to take action to stimulate growth. 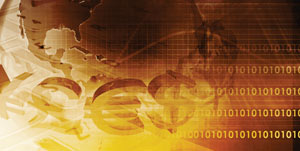 European Union officials have been slow to respond, as the debt crisis has worsened, similar to last year, when financial markets tumbled in the second half, analysts say. "The leaders in Europe are unwilling to deal with the crisis," says Alistair Cotton, senior analyst at Currencies Direct, a global provider of foreign exchange and international payments services out of London.

Commenting ahead of the Greek election, Cotton said: "There is only so much austerity a country can take. An easier option is to leave the euro currency union."

If the eurozone is to succeed, it needs a centralized treasury, similar to the US's, Cotton says. However, France and Germany cannot agree on the issuance of euro bonds. François Hollande, the new president of France, says eurobonds should be considered as an option for settling the problems, but German chancellor Angela Merkel says the bonds are no substitute for fiscal discipline.

"It would be dangerous to kick Greece out of the eurozone because if Greece were to leave, it would set a precedent for Portugal and Ireland," Cotton says. The euro is likely to continue to decline in value, especially against the dollar, as the uncertainty builds, he says. The euro fell to a 22-month low at the end of May, after tumbling 5% for the month against the dollar and the yen.

"The euro is absorbing negative sentiment," Cotton says. "The euro could potentially be stronger without Greece, following a period of volatility." If Spain were to leave, however, that would be a real problem because European banks are in serious trouble, he says.

Analysts at Barclays Capital in London say the costs of an immediate Greek exit are still too high for either Greece or the euro area. "A disorderly exit would lead to a massive run on bank deposits, a meltdown of the Greek banking system and further aggravation of Greece's large economic downturn," they wrote in a recent report. "For the euro area, the main cost would be contagion. We think rationality will prevail and Greece will remain in the euro area in the near term."

Greek banks have lost almost a quarter of their deposit base over the past two years, despite having a deposit-guarantee scheme, suggesting that such schemes are not sufficient to deal with either systemic risks or redenomination risks, according to Barclays. "We argue that even a European-wide deposit-guarantee scheme would not be sufficient to manage contagion risks," it says. Contagion risk could complicate the already precarious financial positions of countries like Portugal and Ireland, and the systemically more significant economies of Spain and Italy, Barclays says.

The Group of Seven (G7) industrialized countries held an emergency conference call about the eurozone debt crisis on June 5, but no communiqué was issued. The US and Japan, both of which have seen their currencies rise on safe-haven appeal, pressured Germany, France and Italy to take stronger action to resolve the crisis. "

Markets remain skeptical that the measures taken thus far are sufficient to secure the recovery in Europe and remove the risk that the crisis will deepen," White House press secretary Jay Carney told reporters. President Obama has cited the crisis in Europe as a potential threat to the US economy, which he would like to see strengthen ahead of the election.

"The G7 are trying to come up with an innovative deal," says Dean Popplewell, chief currency strategist at Oanda, which provides Internet-based foreign exchange trading and currency information services. "The global economy is back in recession already," he says.

"North America is frowning at austerity issues, and the Bank of Japan has itchy fingers to do something about the strong yen," Popplewell says. Last August Japanese prime minister Yoshihiko Noda, who was finance minister at the time, ordered the nation's central bank to intervene unilaterally to halt the yen's rise, which he said was hurting the country's exporters. "The euro is capped on the top side. There is nothing to support a higher euro. The market will continue to pick away at it, and the single currency will continue a relatively slow descent."

The intensifying verbal intervention by Japanese officials suggests the chances of actual intervention have increased, according to analysts at Barclays Capital in Tokyo. "Japanese officials have repeatedly expressed their concern over the stronger yen," the Barclays analysts note. "Unusually, prime minister Noda commented on foreign exchange, saying that recent moves are one-sided and do not reflect Japanese economic fundamentals."

In the US, the disappointing nonfarm payroll numbers in April and May increase the likelihood that the Federal Reserve will go ahead with another round of quantitative easing, or QE3, later this summer in an attempt to bolster employment growth, says Michael Woolfolk, managing director at BNY Mellon Global Markets. "Inflation and inflation expectations will be secondary considerations for the Fed, now that 10-year treasury yields are back below 2%," he says.

Fed chairman Ben "Bernanke can continue with business as usual—namely, preparing for a QE3 move before US Labor Day [September 3]," Woolfolk says. In his testimony to the Joint Economic Committee of Congress on June 7, Bernanke said the Fed is "prepared to take action" if needed to boost the US economy, but he made no commitment to more quantitative easing. Asked if QE3 could be effective, Bernanke said: "Quantitative easing in the past did ease financial market conditions and lowered spreads." Rates paid by corporations, mortgage borrowers and consumers declined, he added. "Further quantitative easing could be less powerful than in 2009, but it could still add some additional accommodation and additional support for the economy," Bernanke said.

Record lows in US treasury yields, which dipped below 1.5% in early June, are mirrored in 10-year German bunds and French OATs, which are similarly well-bid, Woolfolk says. "Consequently, the risk-aversion capital flight extends to European peripherals, but not the European core." He says that the euro has further to fall, but it is clear that it is strongly oversold, with considerable upside potential once the Greek exit question is answered.

Coordinated monetary policy action from the G7 central banks is plausible and might even be likely, says David Gilmore, partner and economist at Foreign Exchange Analytics in the US. "But this presupposes that officials get the scope and nature of the crisis, and I am not sure they do," Gilmore says.

"Risk is rallying on talk the Fed will launch QE3, in light of how rapidly Europe's financial system is unraveling in the periphery and the collapse of real economic activity across the eurozone," Gilmore says.

The Fed cannot lead a policy easing based on European developments, he adds. The European Central Bank must move first or at the same time as the Fed. "The only way to get something going to support risk is for central banks to move in a joint fashion," Gilmore says.

"If there is a joint central bank move, I don't think it is endgame for the crisis, or checkmate for the euro unraveling," he says. "There is plenty more to go in the crisis, and real solutions have to come from governments, not central banks."

China's central bank announced a quarter-point rate cut on June 7, its first cut since 2008, in an attempt to stimulate its slowing economy. China's manufacturing output declined in May for the seventh consecutive month, according to a purchasing managers' index compiled by HSBC.

China's one-year lending rate is now about 6.3%, giving it far more room to cut rates further if need be, compared with central banks in the developed economies.

Marc Chandler, global head of currency strategy at Brown Brothers Harriman, says the latest string of economic data confirms a slowdown in many parts of the world economy. In emerging markets, growth has slowed in China and India, and the drop in oil prices is not good for Russia, he says. The euro area avoided a contraction in the first quarter, solely as a result of Germany's 0.5% expansion, and the euro area is unlikely to be as lucky in the second quarter, Chandler says.

"Even if the risks of new Fed action have increased, the critical nature of the European debt crisis and Europe's own poor data suggests there may be a policy response there first," he says. The EU aid package for Spain's banks should not "obscure the fact that the underlying quagmire just got deeper," he says. 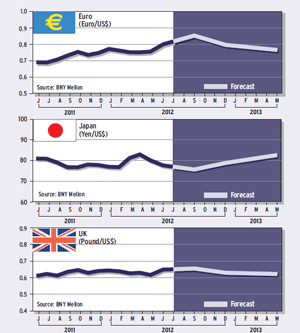 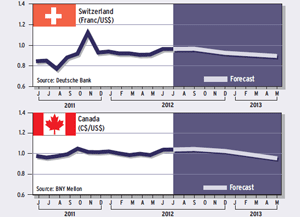 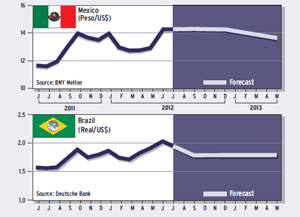 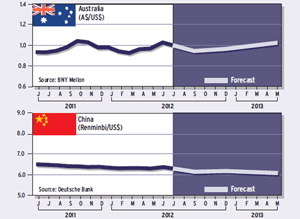 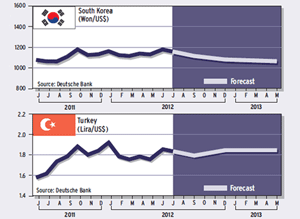