Back Page: Polls and Stats - The Impact Of Rising Prosperity On Economic Growth

The Impact Of Rising Prosperity On Economic Growth

Growth in the world’s economy is moving large numbers of people out of poverty, and if the trend continues, the shift will be dramatic in many countries by the end of the decade… Among the bottom 40% of the population in low and middle income economies, additional contributions to national income...over the decade will total $15.8 trillion… They [will] have at their disposal a “useful” sum of money that they may increasingly wish to manage in the formal financial sector.
—Financial Inclusion 2020 Project: Mapping The Invisible Market, Center for Financial Inclusion, Accion 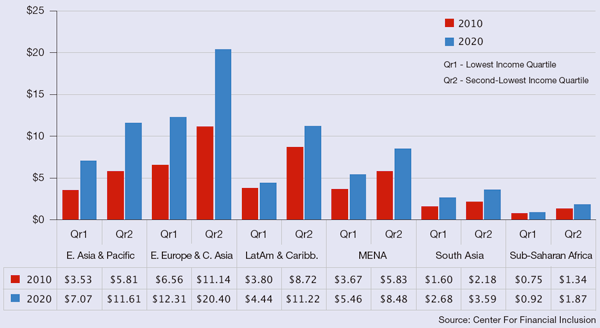 From GFMag.com —our online readers have their say

Will the increasing economic power of the main developing countries, such as the BRICS, translate into political influence on the global scene and in multilateral organizations?