US interest rates have been in a general declining trend since 1981, when Paul Volcker was Federal Reserve chairman and the 10-year Treasury bond yielded 16%.

A sell-off in the bond market that began this May pushed the 10-year yield up from 1.6% to 2.25% in early June, possibly heralding an end of the bond market’s three-decade rally, analysts say.


“With rates now near historic lows, we believe this [secular bull market] run is near its end,” strategists at US Trust wrote in a recent report. “We expect bond yields to rise over the next few years as the Fed and other central banks begin to withdraw stimulus from the markets.”


US Trust, part of Bank of America Private Wealth Management, said this means returns from bonds will be lower for investors than those of recent years. It is unlikely that interest rates will rise explosively and cause bond prices to plummet, the bank’s fixed-income strategists said. “Rather, we believe interest rates will rise slowly and steadily, causing bond prices to deflate over time more in the manner of a leaking balloon” than a bursting bubble, they added.

RECORD OUTFLOW
Investors pulled a record $12.5 billion out of bond funds in the week ended June 5, prompted by fears the Fed would end its quantitative easing program before long, beginning by slowing its bond purchases, according to EPFR Global. Meanwhile, corporations are rushing to issue debt before rates rise further.


Total issuance of US high-yield corporate debt for the month of May was $36.2 billion, the largest monthly total so far this year, according to KDP Investment Advisers. Ford Motor Credit issued $1 billion of three-year notes in the high-yield market with a coupon of 1.7%.


US Treasury yields began rising after data showed that consumer confidence had reached a post-recession high in May and there was broad-based strength in the housing market, according to analysts at Barclays. “We continue to believe that the theme of normalization in US monetary policy relative to the rest of the world will lead to US dollar strength, and that this trend is still in its early stages,” they said in a recent report.


In a rising-interest-rate environment, investment-grade corporate debt spreads are likely to be supported by increased buying from insurance companies, which should be enough to offset any selling driven by mutual-fund outflows, Jeffrey Meli and Bradley Rogoff of Barclays Capital in New York said in a report titled Higher Yields, Higher Anxiety.

BRAZIL ENDS BOND TAX
Brazil scrapped its 6% tax on foreign portfolio inflows into fixed-income securities in early June, toppling a barrier that was intended to curb hot money flows into its bond market. The surprise move came after the Brazilian real hit a four-year low against the dollar and inflation rose close to 6.5%, the top of the central bank’s target range.


Finance minister Guido Mantega said he was comfortable in removing the tax with the US Federal Reserve “signalling it would reduce asset purchases.” Instead of fighting a currency war to keep the real from rising, Brazil’s central bank has been raising interest rates and intervening heavily in the market to keep the real from falling further. It has $375 billion of foreign reserves at its disposal. 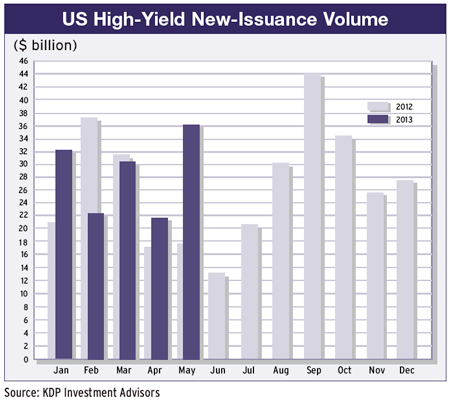