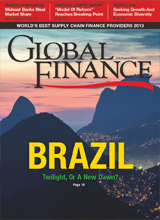 The quantitative easing launched in recent years by the central banks of the United States, the eurozone and Japan is entering a new phase. In the United States, the Fed will reduce the total amount of monthly investments in Treasuries and other fixed-income instruments in the coming months. The current monthly purchase of $85 billion will be reduced and eventually brought down to zero, in what is a symbolic move with very real consequences for the American and world economy. The Fed, we have been told over and over, will be “cautious” and “data-dependent” in its moves.


While Japan has recently launched its QE plan and Europe does not seem close to a change of monetary policy, there is no doubt that the tapering off of the Fed’s QE program signals a new and unknown phase. And recent volatility in the financial markets is a clear expression of that uncertainty.


But there are other issues that cast a shadow over the coming months. Two large, emerging economies—Turkey and Brazil—have experienced domestic unrest. Without getting into the potential political consequences, we wonder to what extent these events are related to a slowdown of those economies. More broadly, the unrest raises the question of whether emerging markets will still lead in terms of growth over more-advanced economies, or whether the slowdown in some leading emerging markets has just begun and the economic leadership of those countries will not be as clear as it has been in the recent past. The answers are not obvious, and the debate on these concerns will likely dominate market discussions in the coming months.


Such discussions are part of what brought about our cover story on the future of Brazil. Global policy changes also impact much of our key coverage areas this month, where we look at countries as diverse as Portugal, Nigeria and those of Central Asia. As we present this double issue of the magazine, we are also busy with major upcoming events, like SWIFT’s annual Sibos conference in Dubai this September—to which we devote a large section in this issue—and the IMF-World Bank annual meetings and seminars in Washington, DC in October.