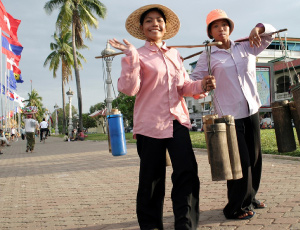 Often overshadowed by its regional rivals Vietnam, Thailand and, most recently, Myanmar, Cambodia has been undergoing a quiet transformation. After more than a decade of 6%-plus growth—with just one hiccup during the global crisis in 2009—the Southeast Asian nation of 15 million people has begun attracting serious investment.

But unlike in other frontier markets, investor interest has been driven more by corporate demand than by the country’s self-promotion efforts. In fact, for many labor-intensive manufacturing operations, Cambodia has become an attractive option almost by default. A series of disastrous factory fires and collapses has dented Bangladesh’s appeal, Vietnam is weighed down with bureaucracy, while growing awareness of wage inflation in China has companies looking elsewhere in the region. Cambodia, renowned for its relatively light-touch regulation of foreign investors, is a prime choice.

The resulting surge in investment has been dramatic. Last year direct investment hit a record $1.5 billion, according to Unctad, with foreign companies now pouring more investment-per-capita into Cambodia than they are into China.

“Wages are a third to a quarter of those in China,” Duke Shin at New York–based brokerage Auerbach Grayson, notes. “For companies looking for a manufacturing base, Cambodia has increasingly become an alternative.”

Daniel Riegler, an associate with M Invest, a corporate finance advisory firm based in Phnom Penh, Cambodia, and Yangon, Myanmar, says the country’s population is young, entrepreneurial and motivated. With strong GDP growth, an emerging middle class and a growing local consumer market, Cambodia is gaining appeal as a market to sell into, he notes.

Cambodia’s investor-friendly climate, with no restrictions on foreign ownership, is another essential ingredient to its recent success. “Cambodia is considered one of the more open markets in Southeast Asia,” says Keith Rabin, president of KWR International, a frontier-markets consulting firm. “It’s relatively inexpensive and definitely laissez-faire.”

Evidence of its troubled political and military history still remains, however, and Cambodia’s economy is growing from a very low base. Corruption, although decreasing, is still prevalent, and transparency as a business concept is unfamiliar to many local enterprises—a fact, says Riegler, that presents challenges to companies adhering to international standards. “Many local and regional companies do not operate with 100% transparency and can gain serious advantage in terms of tax compliance and other informal perks, which are reflected in their margins,” he says.

Giulia Zino, an associate analyst at Control Risks in Singapore, says foreign investors must be aware of graft. “The government appears willing to tackle corruption, but its capacity to prosecute and investigate it is limited because there are so many entrenched interests.”

“Infrastructure, particularly roads, ports and electricity, can also be an issue,” says Shin. Helped by substantial foreign investment, Cambodia’s infrastructure is advancing rapidly—particularly its roads, waterways and telecoms—but the country still has work to do in terms of infrastructure development.

One thing is clear, though. As Cambodia’s development continues, it is becoming a serious regional contender.