Volatility has returned to the currency markets, as participants weigh the likelihood that the Federal Reserve could dial back on its purchases of bonds if the US economy improves.

A relatively strong employment report for May showed that the economy had created 175,000 jobs, indicating that government spending cuts are not creating the strong headwind many feared, giving a lift to the dollar.

The dollar had slumped to its lowest level against the euro in more than three months in early June after European Central Bank president Mario Draghi made it clear that any move to negative deposit rates would remain on the back burner. “Investors found renewed faith in the euro,” says Christopher Vecchio, currency analyst at DailyFX.

But the stronger-than-expected US jobs report turned the tables in favor of the dollar, despite a rise in the unemployment rate to 7.6% from 7.5% in the preceding month. “Americans are returning to the labor force,” Vecchio says. “Continued modest improvement in the labor market throughout the summer months would put the Fed on track to begin tapering [its bond purchases] by the September meeting.”

Alistair Cotton, senior analyst at Currencies Direct, a London foreign exchange broker and international payments provider, says: “Bernanke is a student of the Depression, and therefore the Fed is unlikely to scale back its purchases of bonds too soon. He wants to make sure that the economy is recovering first.”

The yen is the most interesting currency right now, according to Cotton. “The Bank of Japan will have to tread very carefully, because if it achieves 2% inflation, that would mean that Japanese government bonds yield nothing,” he says. “The BOJ can’t let the situation get out of control.”

“Skepticism has been on the rise over whether Japan will be able to make good on pledges to bring about sustained growth in the coming years,” Manimbo says.

US RATES BACK UP
Marc Chandler, global head of currency strategy at Brown Brothers Harriman, says: “The backing up of US interest rates, anticipating that the Fed will soon be easing up on the accelerator by slowing the pace of QE [quantitative easing] purchases, has seen the US rate premium over Japan and Germany increase.”

The US employment report was close enough to consensus that it did not shed fresh light on the Fed-tapering debate, Chandler says. “The headline net jobs growth was marginally above [what the market] expected, and this was offset by the downward revisions to the previous two months.”

Chandler says the foreign exchange market has become more treacherous than usual. “The main culprit is a growing realization that the low-interest-rate environment that has characterized the investment climate over the last several years is going to end,” he says. “Whether it is in three months, six months or nine months, investors realize it is better to be early than late in adjusting positions accordingly. Indeed, it is entirely possible that the low point in interest rates is behind us.”

Market participants will continue speculating on the Fed’s next move and adjust expectations on the timing of the tapering accordingly, based on incoming data, say FX analysts at Barclays, adding that uncertainty in economic data means volatility is likely to stay elevated in the coming months. 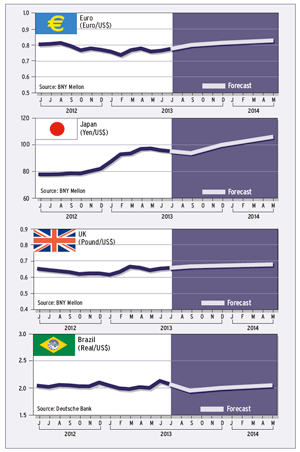