The US dollar plummeted to a four-year low against the euro in early May, giving foreign investors little incentive to chase paltry US returns on investments that could be further eroded by a declining greenback, analysts say.

“The United States offers very low rates at a time when investors are hungry for yield,” says Marc Chandler, chief currency strategist at HSBC Bank USA in New York. According to Chandler, the desire of investors to reach for return is reflected in the rally in the high-yield bond market.

On a trade-weighted basis, the dollar lost 1.5% in April, he notes.The only major currencies against which the dollar was able to advance in the month, were the low-yielding Swiss franc and Japanese yen.The Canadian dollar spurted 3% against the US dollar, and the euro appreciated 2.5%.Among emerging-market currencies, the Brazilian real rose 15.5% against the dollar, and through April, it was up 21.5% for 2003.

“What foreign investor is eager to buy US government paper with 40-year lows in short-term rates, decade lows in long-term rates and a dollar that is increasingly at risk of crashing?” asks David Gilmore, economist and partner at Essex-Connecticut- based Foreign Exchange Analytics.

“Our bet is that European and Asian investors will be putting a whole lot less of new capital to work in the US bond market, and there isn’t enough US savings to make up the difference in a period of rapid expansion in supply,” Gilmore says.

The real risk for the Treasury market is not the Federal Reserve stepping in to buy paper like the Bank of Japan, but the US government issuing more and more debt to pay for Iraq, tax cuts, defense spending, Medicare, state government deficits, generous farm subsidies and education, he says.

The euro rose to a fouryear high of $1.1285 in thin trading on the May Day holiday.According to Chandler of HSBC Bank, this level equaled the 15- year moving average of a synthetic euro.“From this perspective, the decline in the dollar is not that significant yet,” he says. Meanwhile, the euro is acting like a beach ball, Chandler says. It can be momentarily submerged by unexpected economic data, but then it quickly shoots higher, he says.

The $6 billion decline in the Federal Reserve’s custody holdings in the week ended April 30 was the third consecutive weekly decline, indicating that foreign central banks may be switching some of their reserves from the dollar to the euro, Chandler says.

Analysts say the tendency of exchange rates to overshoot once they begin moving in a certain direction could mean that the dollar’s decline is likely to extend for some time.

“The dollar continues its downward spiral, and we do not think the end is in sight,” says David Mozina, head of Group-of- 10 foreign exchange strategy at Bank of America in New York.

“The current environment of low interest rates in the US coupled with investors’ reluctance to reenter dollar-denominated assets continues to pressure the dollar,” Mozina says.“Not only does the current account deficit, which requires a startling $1.5 billion per day of funding, throw a shadow on the dollar’s prospects, so too does the looming threat of America’s dual deficits,” Mozina adds.

Loose US monetary policy, combined with the potential for a loosening in fiscal policy, implies a further exacerbation of the current account deficit, and thus, prolonged dollar weakness, he says. 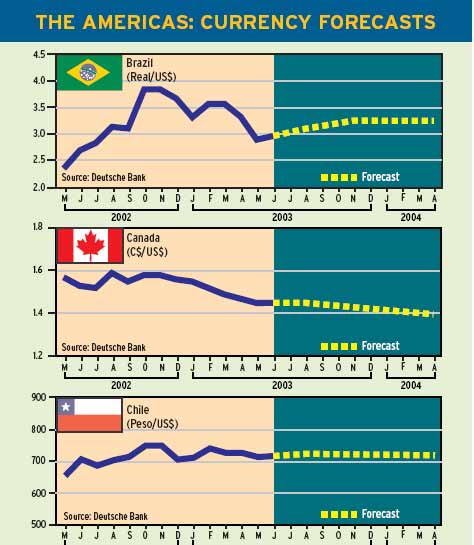