Features : Brazil: Steady As She Goes

Brazil’s new government may still have enough wriggle room to implement reforms while keeping voters happy, but time is not on its side. 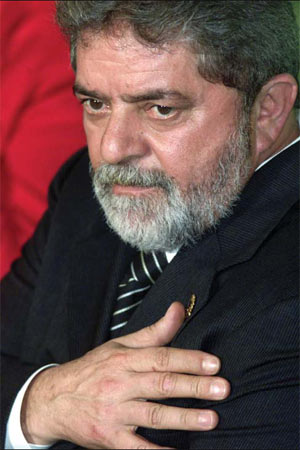 South America’s largest nation is slowly making its way out of an economic red zone as the new administration of President Luiz Inacio da Silva (Lula) walks a fine line to satisfy foreign investors as well as the populace at home.

The leader of Brazil’s Workers Party took an important step in assuring both sides in late April when he presented Congress with proposals for vital reforms of the social security and tax systems. While the proposals face opposition from members of his own leftist party and will cause pain among voters by reducing pension benefits for civil servants, they demonstrated the administration’s commitment to financial health.

“Seventy to 75% of the population is still in favor of Lula and is backing social security and tax reform,” says Marcelo Salomon, Brazil chief economist for ING, who is based in São Paulo. “It’s going to hurt certain people, but the Lula administration has managed public expectations through a media campaign.

The election of the leftleaning Lula last October set the international financial community on edge as they worried he would abandon sound fiscal policy in order to satisfy the needs of the of poor in this nation of 150 million. But since taking office on January 1, Lula has soothed investors’ nerves as well as those of businessmen at home by taking actual steps to bring the country toward improved fiscal soundness.

“So far, not only has [the new administration] talked the talk, but it has also walked the walk,” says Marcelo Carvalho, chief economist at Itau Corretora (Itau Bank) in Sao Paulo. “The administration’s performance has turned out much better than what most observers would have expected not too long ago.”

But Carvalho also cautions that the administration has to move quickly with its reform agenda.

“Popular support for the new administration is strong,” he explains. “As with any new administration, however, public support inevitably tends to decline over time from its initial peak, and therefore the time is now to push for reforms at a speedy pace.”

Most fears of a possible default on the public debt have receded. In fact, an issue of $1 billion in foreigndenominated bonds was oversubscribed sevenfold when Brazil went to the international credit markets in late April.

April was also a positive month for Brazil when Standard & Poor’s upgraded its outlook on Brazil’s longterm local and foreign currency sovereign credit ratings from negative to stable. The New Yorkbased financial ratings agency had downgraded the outlook to negative from stable in July of 2002. 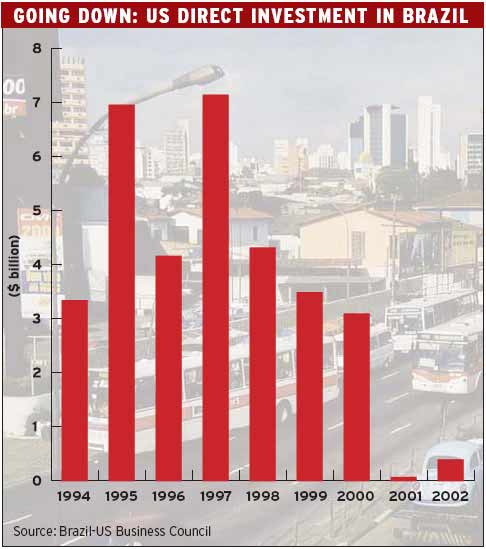 One of the primary reason’s behind the upgrade was the government’s decision to raise its primary surplus target for the nonfinancial public sector for 2003 to 4.25% of gross domestic product, up from the budgeted 3.75%, says Helena Hessel, a director for sovereign ratings at Standard & Poor’s in New York. The budget document that Lula presented to Congress in April maintains the higher 4.5% of GDP primary surplus target for 2004 and probably through 2006—another move that made analysts at Standard & Poor’s happy.

“The transition process went smoothly … and they are taking the policy approaches—strict policies—to move themselves out of debt,” adds Hessel.

The primary surplus is the surplus a country may have after interest payments on its debt are subtracted from the expenditures side of the balance sheet. Brazil pays an enormous amount of interest on its debt and raising its primary surplus target indicates the government is dedicated to either cutting expenditures or raising revenue—a positive sign for financial analysts.

The financial and business community also saw the budget document as one of the first tests of the Lula administration’s determination to adhere to sound fiscal policies that will bring it toward financial health. Congress must approve the budget guidelines by the middle of this year. After that OK, the administration will then submit a 2004 budget to Congress in September.

“Brazil is still in considerable trouble,” says Porzecanski. “The good news is that they didn’t go bust and they’re not in default. But they averted disaster fairly narrowly.”

Porzecanski cited the country’s anemic annual growth rate of 1.5% for 2002 after growth of only 1.4% in 2001, double-digit inflation, high interest rates and large budget deficits as indications of the nation’s financial woes.

“ Things could be worse, but they could be a lot better,” he adds.

US investment in Brazil has declined since 2000 as the government’s priv a t i z a t i o n p r o gr am stalled, the economy faltered and foreign investors worried about the implications of a leftist party running the country, says Smith, who is based in Washington, DC.

“People sat on their hands waiting to see what Lula would do,” Smith adds. “Overall, there’s a great relief and a new optimism about the possibilities of the Lula administration.”

Another positive signal that has calmed the fears of international financial markets is the first step toward a fiscal responsibility law that guarantees the autonomy of the country’s central bank.The passage of the law is an arduous process that requires an amendment to the constitution. Even though analysts don’t expect the law to be passed until 2004, Lula successfully took the first step in that process when the House of Deputies approved the constitutional amendment in April.

The vote on the constitutional amendment still requires Senate approval and then must make its way through both arms of congress once again. Then the legislation setting up the actual fiscal responsibility law can be presented to the legislative branch.

“There’s already a lot of respect for the central bank’s independence so the law is not such a big priority right now,” says Barrionuevo. “I’m very encouraged by what they’re doing—things are going remarkably well.”