The separation of hotel brands and ownership of properties is enabling the lodging industry to entice investors to cough up money for expansion and development. 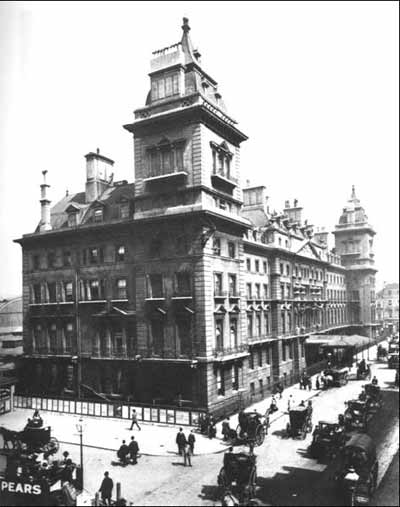 Tough economic times have spawned a fundamental change in the way the hotel industry operates. Analysts say the growing trend among owners to seek independent asset-management firms to run their businesses has been so successful that it likely will continue long after the economy recovers and hotel rooms fill up.

The separation of ownership and management is a development that has caught hold in the difficult environment of the past few years, says Charles Human, managing director of London-based HVS Investment Services.

“The technique is a good way for hotel chains to raise capital to finance growth,”he says.“An institutional investor may purchase a hotel property and simply collect rent from a management company under a 25-year operating lease.”

If the rent is indexed to inflation and the hotel operator doesn’t go broke, there is very little risk involved for the investor, Human says.

HVS International, a global hotel consulting firm, and Invesco Real Estate Advisers, a subsidiary of Amvescap, a fund manager with $323 billion of assets under management, formed a hotel-financing advisory service in February 2003, known as European Hotel Financing Services. The alliance will act on the behalf of hotel owners, investors and developers to secure the best financing solution for any given situation, Human says.

“Ours is the first hotel financing-advisory alliance operating on a pan-European basis,” he says.“We are in a position to arrange creative financing that may be new to many hotel owners.”

Capital Hotel Management estimates that more than half of upscale hotels and resorts in the US currently use some form of modern asset management, more than double the percentage of five years ago. The separation of realestate ownership from management began to be used by major US hospitality firms in the last decade. In October 1992, Marriott announced plans to divide its operations into two separate, publicly held companies through a special dividend to stockholders.

In October 1993,Marriott completed the split of its operations into Host Marriott, owner of lodging real estate and operator of airport terminal concession businesses, and Marriott International, manager of lodging and contract- service businesses.

Maryland-based Host Marriott later divided its operations into two separate companies, one to manage the service concessions at airports, on toll roads and at sporting events, and the other to continue owning lodging real estate. Host Marriott’s evolution continued in January 1999, when it reorganized its business operations to qualify as a real-estate investment trust.

REITs are exempt from corporate income tax. They raise money for real-estate ownership, but are not permitted to manage the properties they own.

Nicholas Marsh, Londonbased CEO Europe of Jones Lang LaSalle Hotels, a hotel investment services group, says private capital has continued to be available to the hotel industry, even after the events of September 11, 2001 sparked a paring of business-travel costs compounded by slow economic growth.

That meant vulture funds that circled over quality properties in anticipation of distress sales were disappointed to discover that many owners had deep pockets and were generally able to ride out the rough seas. Meanwhile, the conservative lending policies of banks, following the shutdown of public equity capital to the hotel sector,have kept default rates at historic lows.

While key loan-to-value ratios have fallen to 65% or less, and construction financing remains hard to come by, the hotel-debt climate is clearly improving.The majority of hotel markets worldwide appear to have hit the bottom of the cycle, although the German market may still have further to fall, Marsh says.

“The supply side has been fairly stable in a lot of markets, although there has been a major increase in supply of rooms in Barcelona and Madrid,” he says.The availability of cheap air travel in southern Europe should mean that the supply could be readily absorbed, he adds.

Italy achieved the secondhighest volume of single-asset sales after the UK of all European countries monitored by Jones Lang LaSalle Hotels in 2002.

Of the four transactions that took place last year, three involved UNA Hotels and Resorts, a national Italian chain that is expanding rapidly. The other sale was of the posh Four Seasons Hotel in Milan at a record price per key.

In the US market,investor appetite for high-yield bonds has ensured that refinancing has remained available, says Barbara Cappaert, Chicago-based gaming and lodging analyst at KDP Investment Advisors.

Trump Holdings & Funding, for example, placed $425 million of seven-year first-mortgage notes with qualified investors on March 13 at a rate of 11.625%.

“All of the recent issuance has been for refinancing and to pay down revolving bank-credit lines,” Cappaert says. “There haven't been a lot of new hotels built since 9/11.”

While first quarter 2003 earnings of hotel companies have been disappointing, due to the war in Iraq and higher costs for health insurance for employees and rising property liability premiums, the outlook is improving somewhat, Cappaert says.

White Plains, New York-based Starwood Hotels & Resorts Worldwide, which owns the W hotels, as well as the Westin and St. Regis brands, among others,indicated recently that there has been a slight pick-up in business travel. “Starwood has been a good industry barometer,” Cappaert says.

The general lack of new construction will make it easier for hotel operators to raise room rates when conditions improve, analysts say.

Meanwhile, there has been a significant volume of transactions involving existing properties, as investors have sought out dependable cash flow from branded hotels.

In May 2003, for example, CNL Hospitality Properties, an Orlando, Florida-based REIT, acquired Memphis, Tennessee- based RFS Hotel Investors for $688 million, including the assumption of $305 million of debt.

RFS-owned hotels are operated under such well-known brands as Sheraton, Residence Inn by Marriott, Hilton, Doubletree and Holiday Inn.An affiliate of Bank of America is financing a significant portion of the purchase price on a secured basis.

While the pressure for brand expansion exists, hotel operators in the European market will continue to participate in sale-and-leaseback transactions, as they recycle capital tied up in real estate to fuel growth or improve their balance sheet, according to Nicholas Marsh of Jones Lang LaSalle Hotels. 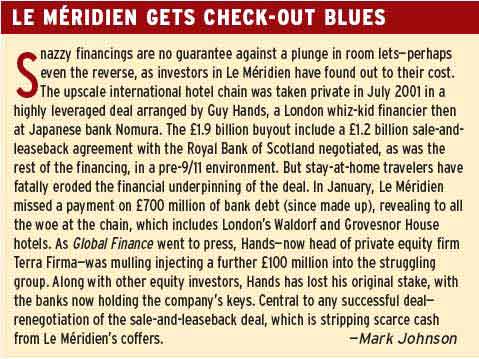 London-based Hilton Plc, owner of the Hilton International brand, entered into a $520 million sale-and-leaseback deal in August 2002.The transaction involved 10 hotels in the UK, including the 603-room Hilton Kensington in London.The hotels were leased to Hilton International for 27 years.

The number of sale and leaseback deals has increased, and the practice is slowly spreading to parts of continental Europe, Marsh says.