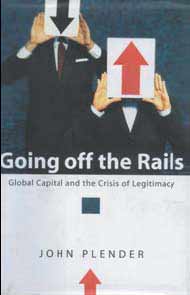 The end of the great stock market boom and the subsequent flood of corporate scandals have unleashed a tidal wave of books on the iniquities of the market system, many of them run through with the unmistakable tang of hindsight. But there are some that rise above the mass, either because the author has made a determined, measured effort to dissect the beast, or because the writer has, indeed been calling ‘foul’ even when the crowd was cheering on the quarterbacks. John Plender’s book on the crisis of legitimacy in capitalism meets the first test; Frank Partnoy’s latest book builds on themes that first emerged in his 1998 book F.I.A.S.C.O, Blood in the Water on Wall Street.A kind of financial ‘kissand- tell’, that book caused uproar with its tales of sharkish behavior from sellers and traders of derivatives.The UK regulator Howard Davies infamously called it “a nasty little book.” Any one else who had much contact with that world instantly felt a shiver of recognition.

Now a law professor in San Diego,Partnoy’s tone is a little wryer but no less angry as he plays his fire across a wider arc—the boardrooms of corporate America. That’s well-travelled ground now, of course and Partnoy’s second book lacks the raw shock of the first-hand tales of trading room wrongdoing that made F.I.A.S.C.O essential reading.

Still, the central message of Infectious Greed bears repeating—that the size and complexity of the booming over-the-counter derivatives markets has far outstripped the ability—and let’s face it,in some cases,the will—of regulators to get a grip.Add to that the asymmetrical nature of the risk-reward structure governing both sides of the buysell divide and you’re left with a poisonous cocktail. 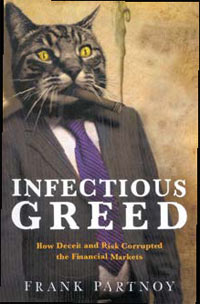 The imbalance between risk-taking CEOs and shareholders left carrying the can lies at the heart of John Plender’s book, Going off the Rails. As befits one of the UK’s most respected financial commentators, Plender doesn’t trot out easy nostrums for the ills of Anglo-Saxon capitalism. In a world where the wrongdoings of bankers and company executives provide ample fuel for the critics of Adam Smith’s legacy, Plender makes the important point:“That is not to say that this capital market model is broken in the way that caused the Soviet model to come to grief.For while the capital markets signals are distorted, the price signals in the realworld markets for goods and services are not.That has been the saving grace of the Anglo- American system, as it has been of other flawed models of capitalism.” Such measured tones are not the stock-in-trade of Dan Briody,a former Wired and Red Herring writer who has written The Iron Triangle: Inside the Secret World of the Carlyle Group. Unbalanced and uneven, the attack on the ultimate access buyout firm reads like a cuttings job. Briody misses crucial punches, disappointing readers pumped up by his breathless style. Still, in a world where Richard Perle sees no wrong in sitting on both sides of the defense advisory business, any warnings on the unaccountable and growing world of the military-industrial complex serves some purpose.This form of crony capitalism may do as much damage to genuine free markets as anything that bent CEOs or shuckster derivatives traders can dream up.

Going off the Rails. Global Capital and the Crisis of Legitimacy, by John Plender. John Wiley and Sons. New York $19.95

The Iron Triangle: Inside the Secret World of the Carlyle Group by Dan Briody. John Wiley & Sons. New York $24.95