The improving global economy is spurring an increase in debt issues by lesser-rated companies, as the risk of default declines, analysts say.

Worldwide issuance of high-yield corporate bonds is running well ahead of last year’s pace, according to Dealogic.

March 2004 was the most active month for high-yield volume in more than a decade, with $22.8 billion worth of issues, Dealogic says.

US-based companies accounted for 59% of total high-yield issuance from January 1 to May 12, 2004, down from 68% of the total in the same period of last year. South Korean companies ranked second to the US this year, followed by companies based in Russia, the UK and India, according to Dealogic.

High-yield bonds should rise one basis point, or onehundredth of a percentage point, for every two-basispoint rise in US treasury bond yields for the remainder of 2004, he says. This clearly implies tighter spreads, as credit fundamentals remain strong, Loeys says.

The Fed has promised a measured pace of adjustment, but the excessive stimulus of the past few years suggests that the economy will not give policymakers that luxury, says Ram Bhagavatula, chief economist of financial markets in North America for Royal Bank of Scotland.

“The combination of strong growth and increasing inflation has suddenly put the economy well ahead of Fed policy,” he says.

Charter Communications, the third-largest cable-TV operator in the US, issued $1.5 billion of senior second-lien notes to refinance the debt of certain subsidiaries.

Charter,which is controlled by Microsoft co-founder Paul Allen, lost $294 million in the first quarter of 2004. 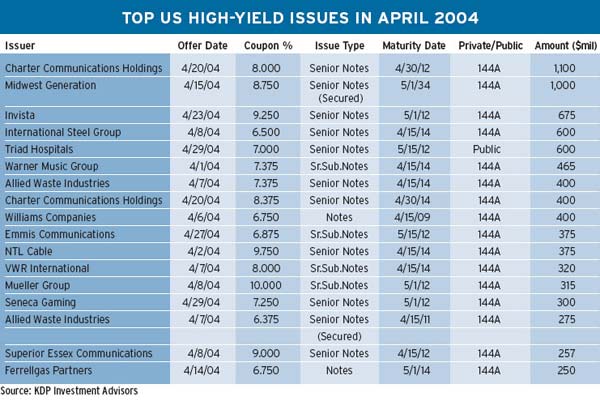