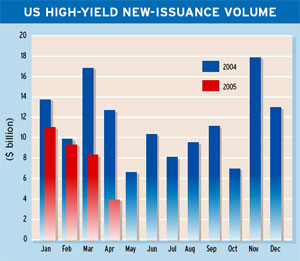 US companies will be paying more to borrow money in the wake of the widening of credit spreads between corporate and treasury bonds following the downgrading of General Motors and Ford Motor.

Coming months sooner than expected, the move by Standard & Poor’s to lower the rating of GM and Ford bonds to below investment grade created some turbulence in the debt markets, as investors fled corporate bonds for the relative safety of US treasury bonds.

US government bonds rallied in mid-May, amid worries that hedge funds were sustaining big losses in credit derivatives and collateralized debt obligations, or CDOs, analysts say. These derivatives contracts are popular with hedge-fund managers because they offer leverage and can be purchased for as little as 10% of the value of the underlying securities.

In the past five years, there has been massive growth in the trading of credit derivatives, such as credit-default swaps, says Mark Kiesel, executive vice president at Newport Beach, California-based Pacific Investment Management, or Pimco.

“Interestingly, hedge funds are the largest users of credit derivatives,” Kiesel says. “Several of the largest Wall Street firms estimate that 50%-60% of their current trading volume in credit default swaps is with hedge funds,” he says.

The recent widening in credit spreads was led by hedge funds buying protection in credit derivatives index products, according to Kiesel.

In addition, investors are selling high-yield bonds to make room for any potential investment-grade fallen angels that may be coming their way, Kiesel says.

“Ford and GM will look for the cheapest and most-liquid ways to borrow money, and that could easily lead to higher asset-backed issuance and lower straight corporate issuance,” Green says.

Meanwhile, the Bush administration announced that it is considering bringing back the 30-year treasury bond to help finance growing budget deficits and extend the maturity of the debt.

Timothy Bitsberger, assistant treasury secretary for financial markets, says a decision on whether to bring back the 30-year bond will be announced on August 3, 2005, when the government will detail its quarterly borrowing plans.

Investors such as pension funds and insurance companies have a strong appetite for long-dated securities, says Green of the Bond Market Association.

“Reintroduction of 30-year treasury bonds would be helpful for the market and market participants, for example, by expanding investment opportunities for employee pension funds,” Green says.

In the US high-yield bond market, new issuance fell to $3.25 billion in April from $8.3 billion in March, according to KDP Investment Advisors.

Oklahoma City-based Chesapeake Energy issued $600 million of senior notes due in 2016. The company will use the proceeds of the offering to partially fund $686 million of recently announced acquisitions of oil and gas properties in Texas and New Mexico.