Dollar Bulls Run Again, as US Economy Heats Up

The pieces of the US economic puzzle fell neatly into place last month, creating a picture of strength that enabled the dollar bulls to gain the upper hand.

The euro dropped to 1.27 to the dollar, its low for the year, following the “shop ’til you drop” May 12, 2005, US retail sales report, which showed exceptionally large increases in sales of clothing and motor vehicles.

Coming on the heels of a surprisingly strong employment number, with a rise of 274,000 in non-farm payrolls in April, the reports showed that the US economy is reaccelerating, and this created demand for dollars, analysts say.

The upbeat tone emerged at a time when worries about an economic slowdown had begun to weigh on the financial markets.

“If the non-farm payrolls took the ‘soft patch’ argument off the table for the Federal Reserve, the retail sales report buried it six feet under,” says Michael Woolfolk, senior currency strategist at Bank of New York. The Fed is expected to continue raising rates by at least a quarter point at each scheduled meeting this year, he says.

If the dollar bulls needed any more convincing, the US trade deficit for March came in better than expected at slightly above $55 billion, instead of the $62 billion consensus forecast.

The deficit narrowed from a record $61 billion in February, despite higher oil imports. Much of the improvement can be attributed to a strong seasonal effect and a narrowing of the bilateral trade imbalance with China, Woolfolk says. “For the time being, it appears that the dollar bulls are in control,” he adds.

Nevertheless, China remains the proximate cause for the long-term deterioration in the US trade balance, which is not expected to show any lasting improvement until China begins to adopt a more-flexible exchange rate, according to Woolfolk.

He says Chinese officials conservatively estimate that the US lifting of import quotas on Chinese textiles will prompt a 15% increase in the US importation of such goods this year.

“On this basis alone, it is difficult to imagine how the trade balance with China is expected to improve with the US economy growing at a 3% to 4% annual rate,” Woolfolk says.

Concern over the twin-deficit problem in the US has been shelved for the time being, he says, and the better-than-expected trade figure suggests that the US first-quarter gross domestic product will be revised upward.

Meanwhile, the strong US economic reports kept the dollar firm amid weakening fundamentals in Europe.

The British pound fell sharply on May 10, as UK retail sales took their biggest drop in nearly a decade. The British Retail Consortium said the fall was due to the slowdown in the housing market, which caused consumers to cut their spending on such items as appliances and clothing.

House price inflation for England and Wales was 10.3% in the first quarter, down from 11.8% in the previous quarter, and the slowest rate of increase in three years.

“Both of these releases exhibit worries for the UK consumer,” says Clyde Wardle, chief currency strategist at HSBC Bank in New York. “With the Bank of England keeping a close eye on these risks, this is bad news for [the pound] sterling,” he says. 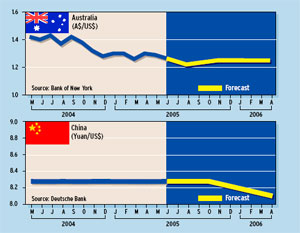 German gross domestic product grew 1% in the first quarter, which was stronger than expected, but growth was entirely centered in rising net exports and not domestic demand, says Anne Mills, director of currency research at Brown Brothers Harriman in New York.

Germany reported a large trade surplus for March, which brought its surplus for the first quarter to €46 billion from €35 billon in the fourth quarter of 2004. The rise in the trade surplus was equivalent to 2.1% of Germany’s nominal first-quarter GDP, more than explaining the rise in GDP in the quarter, Mills says.

First-quarter GDP growth for the eurozone of 0.5% was barely above the consensus, and GDP in Italy, the Netherlands and Finland declined, Mills says. The first-quarter GDP number for France, which had not yet been released as Global Finance went to press, was also expected to be weak. French industrial output fell in March, coming in below expectations for the second month in a row. 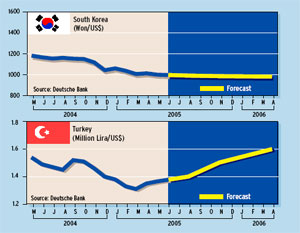 Meanwhile, amid speculation and false reports of a yuan revaluation, China introduced additional measures last month to cool its housing market. Homebuyers who sell within two years of purchase will have to pay a tax. In addition, the government will revoke land-use rights for sites that are not improved within two years.

Earlier measures to slow the housing market, announced in March, have pushed down housing prices significantly in Shanghai.

According to analysts at Brown Brothers Harriman, actual foreign investment in China grew just 2% from a year earlier in the first four months of 2005. The amount of FDI in April was 24% below the same month of last year.

The slowdown is due in part to a slowing in investment from Taiwan, one of the largest sources of China’s FDI, the BBH analysts say. In the first quarter, Taiwanese approvals of new investment in China fell sharply, in large part for political reasons, they say.