In the 12th annual Global Finance survey of the world’s best emerging market banks, we honor those banks that consistently provide excellent service and security in often-tumultuous markets. 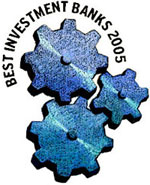 From Google’s Internet auction-style initial public offering to the rise of private-equity consortiums, investment bankers have lived in interesting times in the past 12 months. Financial market conditions have worsened in the past two months, and the year ahead promises to be at least as challenging as the last. Worldwide merger-and-acquisition transactions exceeded $1.9 trillion in 2004, the highest in four years, with Goldman Sachs leading all financial advisers. Merger activity continued at an active pace in the first quarter of 2005, highlighted by Procter & Gamble’s $57.5 billion acquisition of Gillette, creating the world’s biggest consumer products company.

Meanwhile, global underwriting volume rose to a record $5.7 trillion last year, and IPO volume more than doubled to $135 billion, according to Thomson Financial. Issuance of global debt, equity and equity-related securities totaled $1.6 trillion in the first quarter of 2005. While that was a decline of 5.2% from the year-earlier period, it was still the second-best quarterly showing ever for securities underwriting. With companies worldwide seeking to raise huge amounts of capital at a time when major market averages are declining, the selection of a capable investment-banking partner has become critical.

Global Finance editors, with input from industry analysts, corporate executives and banking consultants, identified the best investment banks in the world. We considered deals announced or completed in the last three quarters of 2004 or the first quarter of 2005. Award winners were chosen for best equity, debt, M&A; and overall in six regions and globally. Country winners were selected in 23 nations. Industry-sector winners were chosen in 10 sectors. Best equity, debt and M&A; deals were also selected, and best legal advisers were named globally and in six regions.

Goldman Sachs was singled out as Best Investment Bank globally. The firm tied with Citigroup and Morgan Stanley for the most individual awards; each won six. UBS won five awards, and JPMorgan Chase and Merrill Lynch followed with four awards each.

The winners are the banks that the best companies choose to get their financings done.