The calendar of planned initial public offerings in the US was bone dry last month, and the only issue of size on the international horizon was a scheduled $1 billion preferred securities offering by Mitsubishi UFJ Financial (MUFG). The preferred securities are not convertible to common stock.

The Tokyo-based bank is seeking to shore up its capital after suffering losses in Japan’s slumping stock market and after making more than $14 billion of acquisitions last year, including a 20% stake in Morgan Stanley.

Joseph Schocken, chairman and CEO of Xshares, parent of Xshare Advisors, which designs and sponsors exchange-traded products, rang the opening bell at the New York Stock Exchange on January 28 in recognition of the listing of the AirShares EU Carbon Allowances Fund. The fund, which trades under the symbol ASO, is technically a commodity pool. It is the only exchange-traded equity product that gives US investors access to EU carbon-credit futures, which account for nearly 80% of the global carbon market.

The fund’s shares began trading on NYSE Arca on December 15, 2008, and have since declined sharply, along with the rest of the market. The economy is a key driver of demand for carbon allowances and credits, which give the holders the right to discharge one metric ton of carbon dioxide into the atmosphere. With the economy shrinking, energy usage has fallen, and demand for the credits has eased. As of the end of February, the market price of ASO was down 38% from its inception date.

AirShares is organized as a Delaware statutory trust and is not a mutual fund or investment company. It provides access to the EU carbon-credits futures market without the need to open a futures account. Many institutions that are prohibited from buying futures are allowed to invest in this exchange-traded equity product.

ASO does not track an index. It also seeks to hedge the currency risks associated in fluctuations of the euro and the dollar. Most of its assets are denominated in euros, but it is traded in dollars. Initially, ASO will hold long positions in ICE futures on the Intercontinental Futures Exchange or European Climate Exchange Carbon Financial Instruments futures contracts.

The global carbon market passed the $100 billion mark in 2008 and could reach into the trillions of dollars in the next decade if the US develops a trading-emissions program.

While equity declines have been global, domestic activity in developing countries will drive growth and investment in emerging markets that will allow these markets to rebound faster than developed markets, says Michael Cole-Fontayn, executive vice president and CEO of the DR division at The Bank of New York Mellon. “We expect fundamental DR investment will again pick up in late 2009, led by emerging markets,” he says in a year-end review of international capital markets.

Cole-Fontayn also foresees sustained growth in DR liquidity as a result of an expanded supply of programs. Following a rule change by the Securities and Exchange Commission in October 2008, there has been an explosion of unsponsored DR programs that trade in the over-the-counter market. The Bank of New York Mellon alone has introduced more than 600 such programs since the SEC rule change.

Last year 12 issuers listed new sponsored American depositary receipts on either the NYSE or Nasdaq, down from 40 in 2007. At the end of 2008 a record 2,130 sponsored DR programs from 77 countries were available to investors, a 3% increase from 2007.

The US-listed ADR total was down overall, with 403 programs at the end of 2008, against 430 a year earlier, as issuers continued to delist from US exchanges. Most kept their DR programs available to US investors on the OTC markets, according to The Bank of New York Mellon. 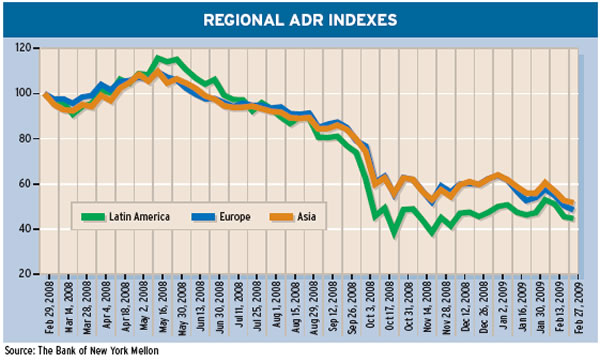