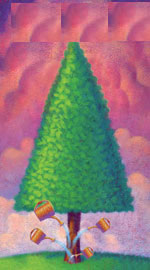 After her husband died, Adija Msw was left destitute with an extended family of 12 to support. She borrowed £15 ($30) from the local Microloan Foundation group in her village in Malawi, which she used to set up a stall selling tomatoes. A second loan of £30 allowed her to expand her business, and she now makes enough money to send her daughter to school. Alima John, also of Malawi, has a similar story. Microloans enabled her to support a family of 10 by selling dried beans from a stall in the market in the town of Nkhotakota. The profits allowed her not only to build a new house for her family but also to send her children to school.

These are just some of the millions of people in countries in Africa, Asia and Latin America who are trying to break free from poverty through the use of microfinancing—small collateral-free loans ranging anywhere from $15 up to $200 that are typically used to establish, sustain or expand small businesses.

But can helping a woman in a village in Nigeria, for example, increase her income from $1 a day to $4 be classified as significant progress? “You are talking about basic life needs being met,“ says Alex Counts, president and CEO of the Grameen Foundation. “If 110 million people increased their per capita income by $3 a day, every day, that starts to become more meaningful on an aggregate level.”

The US-based Microcredit Summit Campaign aims to reach 175 million of the world’s poorest families (those living on less than $1 a day) by 2015 through microfinancing for self-employment. By the end of 2004 it had reached 92 million clients, 67 million of whom were among the poorest when they took their first loan. “What is unique about microfinancing is that it has some revolutionaries in it which are breaking the rules,” says the campaign’s director, Sam Daley-Harris.

One of those revolutionaries is Dr. Muhammad Yunus, who won the 2006 Nobel Peace Prize for his pioneering work in Bangladesh as managing director of Grameen Bank, which is considered to be one of the most successful microfinancing institutes (MFIs), serving more than 7 million clients. According to Daley-Harris, Yunus started out in 1976 with no particular strategy in mind other than to do what the banks didn’t do by lending to the poor: “Muhammad Yunus [said], ‘Whatever banks did, I did the opposite. If banks lent to the rich, I lent to the poor. If banks lent to men, I lent to women. If banks made large loans, I made small ones. If banks required collateral, my loans were collateral free. If banks required a lot of paperwork, my loans were illiterate friendly. If you had to go to the bank, my bank went to the village.’”

After spending six years working with Yunus in Bangladesh, Counts set up the Grameen Foundation, which supports a worldwide network of MFIs by providing funding, technical and training assistance. The foundation funds MFIs through direct loans, grants and loan guarantees. Charities such as the UK-based Microloan Foundation uses microfinancing loans of between £25 and £200 to help poor people living in Malawi and the Philippines set up businesses. Executive chairman Peter Ryan set up the foundation in 1998 with one loan manager and a PC in a garage. “International aid has failed to help these people,” he says. “Providing employment gets totally missed out. Some people we have lent to have begun to employ other people and have started to build houses, buy clothes and pay for education.”

This year Ryan estimates that the foundation will make 11,000 loans, helping 50,000 people. While the Microloan Foundation relies on funding mostly from philanthropists, microfinance charities such as the UK-based Fredericks Foundation rely on government grants and business support. Some, however, take a dim view of an over-reliance on government subsidies. “If the basic business model requires subsidies for the long term, we [the Grameen Foundation] stay away from that,” says Counts, adding that the objective for most MFIs is to become self-sufficient.

The Fredericks Foundation’s focus is on the United Kingdom, where it provides loans of between £2,500 and £3,000 to people who have been out of work either through illness, imprisonment or disability to help set up their own business. “We are saving the government something like £3 million to £4 million, as the people we help are not claiming benefits and are living on the proceeds of the businesses we help them establish,” says Paul Barry-Walsh, founder and chairman of the Fredericks Foundation.

Profits With Principles
Barry-Walsh says the foundation’s aims are different from a bank’s. “If they were just profit related, that wouldn’t work for the kind of clients we assist,” he says. That is not to say that most MFIs are not profit-oriented. Counts says half of the MFIs the Grameen Foundation works with are profitable, and the others will break even in the next two to three years. “There is nothing wrong with making a profit,” he says. “However, there is something wrong if you are trying to earn quick profits and get out.”

Although lending to the poor may be considered a high-risk activity, in developing countries MFIs report unusually high repayment rates of 95% to 98%, which is higher than the rate for student loans and credit cards in the United States. Robert Annibale, global director of Citigroup Microfinance Group—which works with microfinance institutions as clients and partners and collaborated with the Grameen Foundation to structure a $50 million Grameen microfinance loan guarantee facility, which co-finances emerging MFIs—says in some cases repayment rates to MFIs are as high as 99%. “Most microfinancing of Grameen-inspired MFIs is done through lending to groups of five to 20 women co-guaranteeing one another," he explains, "so if one of the women has a problem meeting a repayment, other women in the group often help her to make that repayment.”

One of the more controversial aspects of microfinancing is the high rates of interest charged, which can range anywhere from 18% to 60% depending on local conditions. This is to cover the cost of funds lent by the MFI, which Daley-Harris says is often higher because they are lending smaller amounts. Inflation in developing markets is also often high, as are operating costs for MFIs. And as Daley-Harris points out, the only other alternative for a lot of these people is to go to the local moneylender and pay interest of 100% or more.

It does seem there is some potential flexibility, though. The Grameen Foundation, for example, is working to trim interest rates by reducing MFIs’ operational costs through the use of technologies such as mobile banking and card products, which are more cost effective than handling cash.

Annibale says the cost of funds is also coming down for some MFIs thanks to the use of innovative local currency financing structures. Accessing domestic capital markets and financing is key if MFIs are to avoid foreign exchange risks, achieve scale and provide financial services to larger numbers of people. Last year Citi co-arranged a six-year, $180 million equivalent, AAA-rated, local currency securitization of microloans, each averaging just over $100, for Bangladesh NGO BRAC, which lends to more than 5 million clients, says Annibale. Citi also recently announced a $44 million equivalent local currency program to purchase microcredit loans from SKS, one of India's leading MFIs, which Annibale says will enable it to make more than 250,000 new loans to women.

Here Come the Banks
In many countries, Citi works with investors and networks such as the Grameen Foundation to provide financing mechanisms for their partner MFIs, as well as foreign exchange hedging, transaction services, remittance and insurance products. Given that a lot of the MFIs it works with are not licensed to take deposits, and operate from a range of legal vehicles, Annibale says Citi developed appropriate internal credit policies and a specific debt rating model for MFIs that would allow it to lend to these diverse institutions.

When it comes to the provision of savings products, Citi also had to adapt some of its account opening and documentation (passport, drivers license) requirements. “We have entered the microfinancing space with a lot of humility,” says Annibale. “These institutions have been boutiques of innovation that have developed credit practices for the poor that traditional banking credit officers would never have dreamed of.”

However, some believe that if banks enter the microfinancing market by supporting consumer lending at unacceptable rates, eventually the public and the politicians will turn against microfinance. Others say that commercial banks may do a great job of reaching those just above and below the poverty line but will do little to reach the poorest.

“Microfinancing is not going to yield big profits, which is inconsistent with a bank’s DNA,” says Counts. “The ultimate question is, Are they just going to cherry pick those people who are almost eligible [for a bank loan], or are they really going to aspire to help the poorest people in the world? If they want to make a long-term commitment to this market, they are going to have to rethink core elements of their banking model.”