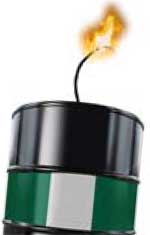 Growth opportunities are staggering. “If you look at this industry, there are less than 500,000 fixed lines in Nigeria today,” says Tom Iseghohi, CEO of TransCorp, a Nigerian conglomerate with holdings in infrastructure, energy and commodities. “This market could take 15 million to 20 million fixed lines. We have a population of around 150 million and a telecom penetration of 25%-27%, while South Africa has a penetration rate of 75%.” Iseghohi says there are also 1 million new mobile subscribers in Nigeria each month, Internet penetration is a meager 3%-4%, and there is no cable television. TransCorp owns a stake in NITEL, the country’s privatized telecom provider, and in MTEL, its mobile telephony unit.

TransCorp’s strategy calls for restoring the country’s fiber optics transmission backbone and expanding its international gateway for data transmission, among plans it expects will boost its annual top-line revenue to $9 billion. Iseghohi says companies looking at Nigeria are generally concerned with political and execution risk, as well as the slow speed of doing business. “The cost of doing business is higher, but the revenue you get is so much higher, and you tend to maintain your margins,” he says.

“Interest in Nigeria remains high. It’s a huge market, with 25% of the population of all sub-Saharan Africa,” adds Hayes. However, he says companies are eying the market cautiously, often servicing Nigeria from such neighboring countries as Ghana, Cameroon and Benin, where their investments are considered to be safer.

Despite the challenges, the IMF predicts Nigeria will post 9% GDP growth this year. The government target is for 13% growth by 2020. High oil prices boosted international reserves to $59.7 billion on March 31, but central bank governor Charles Chukwuma Soludo warns the oil windfall could fuel inflation. Headline inflation has been around 8% this year, and the central bank has restricted monetary policy and released supplies from strategic grain reserves to avert an inflation spike.

“To operate in Nigeria, companies need to understand the domestic landscape of who the good guys are and who the bad guys are and then learn to navigate that landscape with a strong local partner,” says Iseghohi. “It’s no different than in India or China.” Oil companies may have a different opinion.

Perhaps the most dramatic and ambitious economic reform in Africa in recent years is that of the banking system in Nigeria. In July 2004 Central Bank of Nigeria governor Charles Chukwuma Soludo declared that the minimum capital requirement for banks would rise to 25 billion naira ($195 million) from the then-minimum of N2 billion by the end of 2005—a target that most observers believed was impossible to achieve.

The series of mergers, recapitalizations and closures that followed the changed capital requirements for banks in 2005 have proved wildly successful, transforming Nigeria’s banking sector for the better and strengthening the country’s overall economic stability.

As Cecilia Ibru, CEO of Nigeria’s Oceanic Bank, which has a capital base of N213 billion—the largest in the country—notes, M&A; activity in the sector has necessarily died down from the levels of 2004 and 2005. However, the mindset that emerged from that period continues to inform banks’ actions. “The demand for new capital to enable banks to expand their capacity may lead to further mergers and acquisitions,” she says, highlighting the merger of IBTC and Standard Chartered in March this year.
The banking sector reforms have spurred intense competition between banks—prompting increasingly sophisticated offerings, including ATM and online banking services—while a stricter regulation and compliance regime has helped to restore confidence. Moreover, larger capital bases have enabled Nigerian banks to expand into neighboring countries, potentially marking Nigeria out as a future regional financial hub. “We hope to leverage on our presence in other countries to help open up the Nigerian economy,” says Ibru. “And the presence of Nigerian banks in other countries will lead to easy trade facilitation.”
One of the original goals of the increased capital requirements was the creation of domestic banks with sufficient scale to compete with international finance houses to fund the domestic oil and gas industry. Razia Khan, regional head of research, Africa, at Standard Chartered in London, says that the increased capitalization of banks has undoubtedly made them stronger but that in most instances oil and gas infrastructure investment continues to be funded by international banks.
However, Ibru says that some progress has been made. “Nigerian banks are now well equipped to handle big-ticket transactions in the oil and gas sector that were hitherto an exclusive preserve of the multinational companies,” she notes. “For instance, Oceanic Bank has supported the local content policy of the Nigerian National Petroleum Corporation by supporting indigenous oil service companies.” Oceanic Bank recently granted a facility of $15 million to Nigerian conglomerate Vigeo to acquire a state-of-the-art anchor handler vessel from Farstad Shipping of Norway.