The credit crunch made life more difficult for corporate treasurers in many ways—not least in managing their relationships with their cash management banking partners.

Over the past 12 months the European cash management sector has undergone a dizzying array of change, and some anticipate that this is only the tip of the iceberg.

Royal Bank of Scotland, which only months earlier led a consortium that acquired Dutch banking group ABN AMRO, is now majority owned by UK taxpayers and is selling its Asian retail and commercial banking operations. And after being bailed out by the Dutch, Belgian and Luxembourg governments to the tune of €11.2 billion, Belgo-Dutch bank Fortis will be majority owned by French bank BNP Paribas. Meanwhile, Deutsche Bank is still waiting to get the green light from regulators to proceed with its acquisition of the Dutch commercial banking assets of ABN AMRO, which Fortis Bank was forced to sell.

Although some suggest that the worst may be over, for corporate treasurers there is still the fear that they could wake up one morning and find that their major European cash management bank has just announced further write-downs or that it is reviewing its European strategy. “Overall, the mood among corporates is less positive,” says Francois Masquelier, honorary chairman of the European Associations of Corporate Treasurers (EACT). “There is tension in the marketplace, which is difficult to quantify. I hope the worst is over, but I am not sure."


BANKING ON RELATIONSHIPS
Thanks to overleveraging by the banks, treasury and cash management has become more complex for treasurers who up until the current crisis were trying to simplify their treasury operations by centralizing and consolidating their cash management and by choosing a single banking provider in Europe. But when the crisis hit and the banking sector was thrust into turmoil, instead of putting all their eggs in one basket, Masquelier says corporates increased the number of banks they worked with for credit reasons. “Major multinationals using a single banking provider in Europe is now a thing of the past,” he says.

Masquelier’s assertions are borne out by a Greenwich Associates survey on the effects of the credit crisis, which found that 45% of large European companies in the fourth quarter of 2008 were looking to form relationships with new banks willing to assume the role of “core” credit providers. Forty-two percent of companies were also looking for new “secondary” credit providers.

However, Rajesh Mehta, head of treasury and trade solutions, EMEA, Citi Global Transaction Services, believes that the single European banking provider is still the model of choice at least for top-tier corporates. Shahrokh Moinian, head of corporate cash management sales, Western Europe and Middle East, at Deutsche Bank, says not all corporates are dispensing with the notion of working with a single regional cash management bank. “It is not a general trend, and the concept of the single cash management bank is likely to return after the crisis is over,” he says.


A CRISIS OF CONFIDENCE

While corporate treasurers still rely on banks for credit and other banking services, Masquelier says it will be some time before their faith in banks is fully restored. “For the banks, we are still waiting to see what happens [in terms of their financial results] in Q2 and Q3,” Masquelier explains. “We would not want to enter into any complex cash management structures with them at the moment that could be binding, as they are still in the intermediary phase in terms of their recovery.” Mehta says Citi’s global strategy remains intact and that it is also committed to developing not only pan-European but domestic market capabilities, with the economies of France, Germany and the United Kingdom being the core focus of its European strategy.

Yet, as Greenwich Associates pointed out in its study, Europe’s biggest companies are caught in a “banking bind.” While they may be seeking secondary credit providers, smaller local banks do not necessarily have the sophisticated levels of service they require. While some of the “most troubled banks” ceded market penetration over the course of 2008, Greenwich said the losses were not as big as anticipated and that RBS remained the market leader, with 73% of large companies in Europe using it in some capacity in 2008 and approximately 70% using services provided by Citi.

However, Moinian of Deutsche Bank says the “flight to security” is more widespread than Greenwich’s study suggests. Although corporate banking relationships cannot easily be changed overnight, he says treasurers are looking at alternatives. “We had one bank in Europe come to us and ask if they could use us as a back-up just in case,” he explains. “Others want to completely replace their banks.” 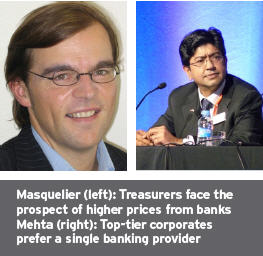 Greenwich Associates’ consultant Tobias Miarka says small banks are picking up business in their local markets among large and middle-market companies that cannot obtain credit from global or pan-European banks. However, with the collapse of the securitization market, even banks with healthy balance sheets are being forced to keep loans on their books, says Miarka, which means they are also being selective when it comes to extending credit.

Masquelier says corporate treasurers face increased pricing for banking services and credit facilities. According to treasury consultant EuroFinance, 76% of the 260 corporate treasurers it surveyed in April said banks that had accepted public money had not lived up to their commitment to help businesses. In the same survey more than 50% said banks had not delivered acceptable lending terms to “healthy companies,” and 78% indicated that bankers were using the tight credit market to force treasurers to accept terms for fee-based services that were more favorable to the banks.


COSTS RISE AFTER CRISIS
Masquelier says bank guarantees or letters of credit to facilitate international trade are a lot more expensive. FX forward pricing has also increased as banks are factoring in the cost of increased credit risk. And, Masquelier adds, some banks are not even considering certain categories of customers. “Banks are being more selective and prefer to work with those customers they know they can make money from,” he says.

Citi makes no secret of the fact that it is focused only on its well-defined target market: top-tier corporates. Moinian says that during a crisis risk is reviewed more closely by banks. “There will be winners and losers,” he continues. “Banks need to invest with those industries that come out the winners.”

Given that bank credit is no longer freely or cheaply available, banks are pushing working capital solutions geared toward helping companies gain greater visibility and control over their cash and liquidity. Citi has bolted on analytics and management information to its TreasuryVision solution to help treasurers make better-informed decisions when it comes to managing their liquidity and investments, although in some cases corporates prefer to use non-bank third-party solutions. Banks are also offering treasurers a wider range of investment products for greater risk diversification.

Sovereign risk is also higher up the agenda. And currency volatility in FX spot rates is a headache for treasurers, as are interest rate risk and big swings in equity markets and commodity prices. “The role of the corporate treasurer has changed to one that is focused more on strategic and analytical activities as a result of the crisis,” notes Masquelier. The treasury function—particularly the working capital aspects, cash conversion cycle, cash forecasting, knowing your net position and managing liquidity risk—has also become a key focus for company CEOs and CFOs.