The clouds parted over the investment banking business in the first quarter of this year amid some hope that a more sustainable model for success is emerging.

September 21, 2008, was a date that may be remembered in the annals of the global financial and economic crisis. It was an important milestone for the investment banking industry in the United States. That was the day the Federal Reserve announced that Goldman Sachs and Morgan Stanley, the last big independent investment banks on Wall Street, would become bank holding companies. 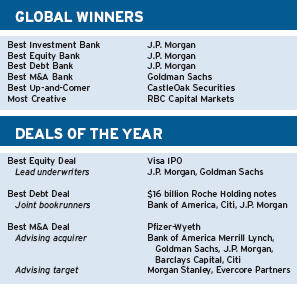 A new model of universal banking more akin to the European system is evolving in the wake of the demise of Glass-Steagall, the Depression-era legislation that separated commercial banking from investment banking. If there is a single financial institution that could be cited as a model of the new global investment bank, it is J.P. Morgan.

In 2000, after the Gramm-Leach-Bliley Act repealed the restrictions on banks affiliating with securities firms, J.P. Morgan merged with Chase Manhattan. It was a clash of cultures from the beginning, but what emerged was a financial institution that combines the capital-raising and financial advisory skills of a traditional investment bank with the funding stability of a retail bank that has a broad base of depositors.

In 2004 JPMorgan Chase merged with Chicago-based Bank One, extending its reach into the Midwest and bringing the bank its current chief executive, Jamie Dimon. With the acquisitions last year of Bear Stearns and Washington Mutual, Dimon has maintained a careful balance of retail, commercial and investment banking.

There is plenty of blame to go around for causing the global financial crisis. Years of cheap money and lax regulation led to the housing boom and bust. Global contagion and panic selling followed the realization that ratings agencies and accountants may have swept considerable dirt under the rugs. From overly creative financial innovation to mismanaged risks, the list of culprits is seemingly endless.

The time has come once again, more than two years after the credit crunch first hit, to recognize those financial institutions that continue to provide outstanding services to their clients amid the turmoil in the financial world. Global Finance’s editors, with input from industry analysts, used a series of criteria to identify the best investment banks in a wide range of categories, by geography and sector.

Our selection criteria included market share, customer service and advice, deal-structuring capabilities, distribution network and staff dedicated to investment banking. We also considered efforts to overcome difficult market conditions, pricing and after-market performance of underwritten securities. The winners are not necessarily the biggest banks, but rather the best banks—the ones that corporations around the world should consider when looking for a financial adviser to meet their investment banking needs. 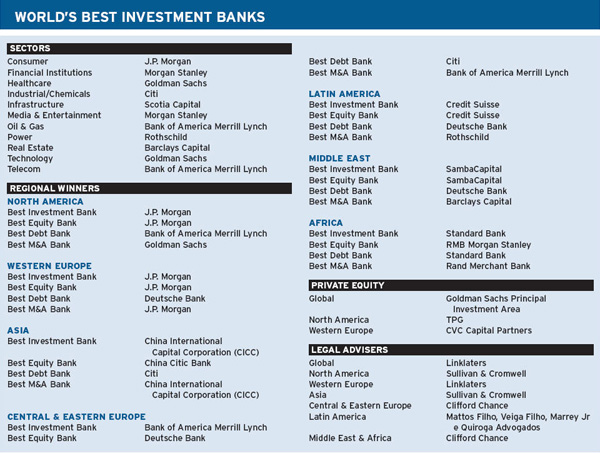 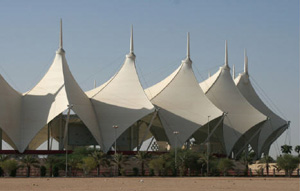