Companies in the US and Europe are bypassing bank loans and issuing large amounts of debt, which is being readily purchased by investors seeking higher returns than are available on government securities. 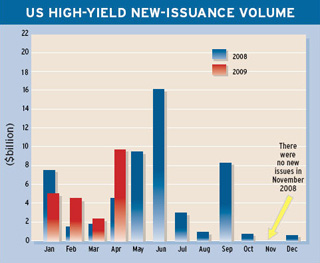 Investment-grade corporate bond sales are at near-record levels for the year to date, and high-yield securities issuance has rebounded sharply from last November, when no new issues at all came to market.

The Federal Reserve’s purchases are keeping rates relatively low on US treasury bonds at a time when signs of improvement in the global economy are encouraging investors to take more risk. Corporations are rushing to take advantage of the open window in the bond market to refinance bridge loans taken out last year to finance acquisitions. Other companies are simply replenishing their coffers for general business purposes or to be ready for future acquisitions.

Microsoft sold bonds for the first time ever in May, even though it has $25 billion in cash and investments. The Redmond, Washington-based software developer sold a total of $3.75 billion of fixed-income securities maturing in five, 10 and 30 years.

In Europe, Paris-based pharmaceutical firm Sanofi-Aventis sold $4 billion of bonds and attracted nearly seven times that amount in bids in less than an hour.

While investors are particularly attracted to high-grade debt, the high-yield market is also active. Issuance of high-yield bonds in the US market rose to $9.8 billion in April from $2.3 billion in March, according to Montpelier, Vermont-based KDP Investment Advisors. In early May Goodyear Tire & Rubber, Teck Resources and other companies sold a total of $8.6 billion in high-yield debt, as the fast pace of borrowing continued. 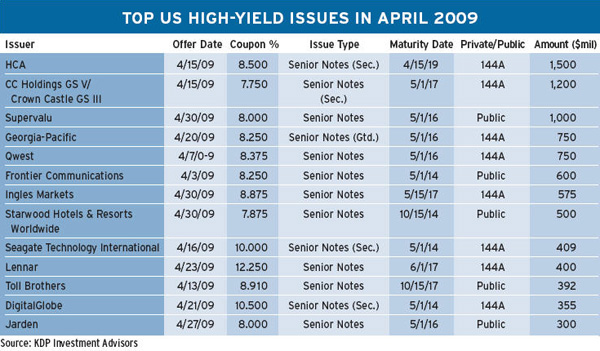 In the year’s biggest high-yield issue to date, Teck Resources, a Canada-based mining company, raised $4.2 billion in a three-part offering. It had planned on raising no more than $3 billion. The company said it would use the proceeds of the private placement to repay its borrowings under an existing bridge credit facility. The company borrowed $10 billion last year for its $14 billion purchase of Fording Canadian Coal Trust.

Nashville, Tennessee-based HCA, a hospital chain, sold $1.5 billion of 10-year notes in April. The company needs to refinance a mountain of debt acquired in a $33 billion leveraged buyout in November 2006.

Subsidiaries of Houston-based Crown Castle International, which owns towers and other structures for wireless communications, sold $1.1 billion of senior secured notes to repay commercial mortgage pass-through certificates. Minneapolis-based grocery store operator Supervalu doubled a senior debt offering on April 30 to $1 billion. It said it would use the proceeds to repay debt issued by its New Albertson’s subsidiary.

The last 10 out of 11 high-yield issues have been used to repay credit facilities, and refinancing by volume has averaged 80% in the past few months, when historically it accounts for about 50%, according to a report by Bank of America Merrill Lynch.