China’s international trade continued to weaken in April, with both exports and imports falling for the sixth straight month. 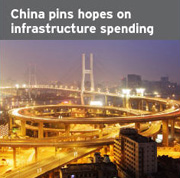 Strong investment growth, however, may offset some effects of this slackening international trade. According to China’s National Bureau of Statistics, total investment in fixed assets grew 30.5% year on year in the first four months of the year.

Transportation and other infrastructure-related projects account for much of the investment increase as the government’s 4 trillion renminbi ($586 billion) stimulus plan begins to gain traction. Uncertainties over the duration of the export drought and the sustainability of the investment growth rate, however, have dampened optimism about the plan’s effect on the overall economy.

Consumer prices in China fell for the third straight month in April, with the consumer price index falling 1.5% year on year. Food prices dropped significantly, pulling down the overall index and likely reflecting cyclical adjustments resulting from sizable increases in food prices in 2008. Still, dropping demand in foreign markets could eventually bring products flowing back into the domestic market and further push down prices.

China will let foreign firms list on the Shanghai stock exchange, China’s State Council has announced. Foreign firm listings represent only one aspect of policymakers’ plan to turn Shanghai into an international financial and shipping center by 2020, according to the announcement. The plan will also encourage more sophisticated financial products, including derivatives and futures, and gradually allow international development agencies and foreign companies to issue renminbi-denominated bonds.

People across China observed a moment of silence on the afternoon of May 12 to commemorate last year’s earthquake in the southwestern province of Sichuan. The earthquake, which registered 7.9 on the Richter scale, left almost 90,000 people dead or missing. Even a year after the disaster, however, questions remain about the deaths of more than 5,000 school children and the degree to which shoddy construction practices and lax government oversight may have contributed to those deaths. Some protesting parents have reportedly been detained. The government released a report in the week preceding the anniversary that found no evidence of faulty school construction.