Before the credit crunch took a massive bite out of global economic activity, oil prices were heading skyward, and fears that supplies might actually run out were rampant. 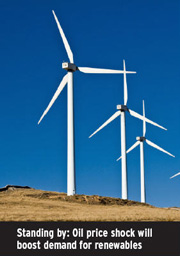 Although the subsequent economic malaise sent energy prices tumbling, experts warn that another oil price shock could be just around the corner. New research from consultant McKinsey’s global energy and materials division warns that the coming economic recovery will generate renewed imbalances between supply and demand and, sometime between 2010 and 2013, will force oil prices up sharply.

Although global energy demand grew at 3.1% a year between 2002 and 2007, McKinsey expects that figures for the past two years will show a significant deceleration of growth to 1% a year, with the biggest contraction in energy demand (1.5% to 2.2%) likely to have occurred in developing countries. However, once GDP in most economies starts growing again, which under a moderate economic growth scenario could be as early as 2010, the consultant predicts that energy demand growth will rebound to 2.3% annually and stay at that level until 2020.

Most of the renewed growth in energy demand is likely to come from rapidly developing economies, which will account for more than 90%, says McKinsey, while energy demand is likely to remain flat in more developed countries such as the United States and Japan. McKinsey notes that China, India and the Middle East are still rapidly increasing their levels of petroleum consumption.

McKinsey warns that unless action is taken to reduce energy-demand growth, spare capacity in the oil sector could return to the low levels witnessed in 2007. That means that as soon as the world economy recovers from its current malaise, oil prices could soar again. McKinsey says there are plenty of low-cost ways to replace oil—other energy sources such as natural gas or renewables are among the alternatives—but there are significant political hurdles to capturing this potential. If growth in oil demand is not successfully reduced, a new oil shock seems almost inevitable.