In the past decade, India and China have been mentioned in the same breath when discussing the coming giants of the world economy. 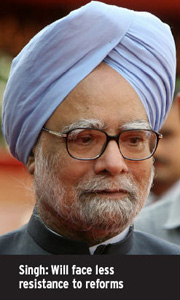 One reason why India has not kept up with China is the complexity of its democratic system. The kudos of being the world’s largest democracy, with 700 million eligible voters, is indisputable. However, the bureaucracy, corruption and buck-passing that are an inevitable part of India’s democratic apparatus severely hamper the country’s opportunity to fulfill its potential.

This inertia has been vividly reflected in the country’s politics, where the energetic efforts of 77-year-old prime minister Manmohan Singh, who recently endured his third heart bypass surgery, have frequently been thwarted by members of his Congress Party-led coalition—particularly from the Communist Party. On May 17, after a month-long election, Congress gained its clearest mandate for 20 years, with more than 260 seats—100 seats ahead of the rival BJP.

The better-than-expected result means that Singh can form a government without communist support. Having been instrumental in pushing through India’s financial reforms in the 1990s, Singh now has “more scope to pursue economic liberalization, including allowing greater foreign investment,” according to research from RBC Capital Markets. Banking, insurance, pension funds and retail are expected to be targets for reform, and privatization is possible.

There are limits to what Singh can achieve, given a global recession and a deficit expected to reach 11.4% of GDP (which could yet result in India losing its investment-grade credit rating). Nevertheless, investors are optimistic about the outlook—seeing this as India’s chance to catch up with China—and sent the Sensex index up 17% on May 18. “[This] could be a game changer and could unlock higher levels of growth for the country in the medium to long term,” says Sam Mahtani, director of emerging equities at asset manager F&C.;