Earnings from investment banking helped major financial institutions return to profitability, but the rules are changing. 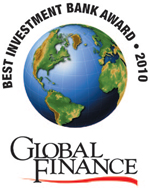 Major banks reported hefty gains in first-quarter 2010 profits, with a powerful assist in most cases from their investment banking operations. Deutsche Bank's earnings rose 48% in the quarter from a year earlier. Record earnings at its investment bank accounted for more than 90% of the total. In the United States, Bank of America Merrill Lynch, J.P. Morgan and Goldman Sachs all reported solid gains from fixed-income trading that contributed greatly to better-than-expected earnings in the first quarter of 2010.

The value of worldwide mergers and acquisitions declined 28% last year to $2 trillion, making it the slowest year for the M&A; market since 2004, according to Thomson Reuters. M&A; activity in the US showed signs of strength in the first quarter of 2010, however, increasing 60% from a year earlier. If the global recovery stays on track and acquisition financing becomes more readily available, M&A; could contribute substantially to investment banking revenue this year.

There are plenty of reasons for bankers to be cautious, however. Regulatory reform is one of them. New regulations on over-the-counter derivatives, higher capital requirements and a new tax to fund bank rescues could cut significantly into future earnings. Meanwhile, the European debt crisis threatens to slow the global recovery.

Amid the uncertainties, the best investment banks continue to put the interests of their clients first and deliver first-rate capital raising and risk-management services. Global Finance once again is recognizing those financial institutions that are helping their customers to grow and succeed. The magazine's editors, with input from industry analysts, used a series of criteria to identify the best investment banks in a wide range of categories, by geography and sector.