With the US recovery still on shaky ground, Canada has seen growth spike, debt markets open wide for Canadian corporates and strong interest from foreign investors in both traditional debt and infrastructure project finance. 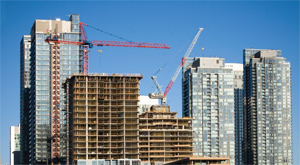 The Canadian economy has surged over the past few months, with economists predicting growth of 3.3% this year, increasing to 3.5% in 2011. This is a sea change from the 2.6% contraction in GDP last year and demonstrates that although Canada is strongly linked to the United States as far as trade goes, it is still a very distinct market from its neighbor to the south.

Geoffrey Somes, senior economist at State Street Global Advisors, notes that one of the real bright spots in the Canadian economic picture has been in home construction. "This is in stark contrast to the US, where housing market activity has just stopped falling and leveled off. [Canada] did not have that same bubble in the housing market. Although there was a more typical recessionary confidence effect that led to a housing market drop, it was not nearly what we saw in the US, and now prices are once again rising, home sales are rising, and new home construction is rising quite nicely," he says.

Another reason for the strong recovery is that the federal and provincial governments responded swiftly to the crisis with stimulus packages that are now having an impact, particularly on areas such as construction and infrastructure development.

The labor market is recovering better than almost any other economy, including the US, according to Somes. "In Canada, although monthly data has been somewhat erratic, the overall trend is quite clear. Since bottoming out, the economy has restored 160,000 jobs, which is a big impact for the size of the overall market," he says. "This is almost a 1% increase over just the last six to seven months, which is corroborated by a decline in unemployment of about five ticks. Unlike the US, where we are still worrying about the jobs piece of the puzzle, it is clear that the jobs piece has fallen into place [in Canada]."

Companies in Canada are also benefiting from the relatively stable regulatory regime. Canadian corporates, financial institutions and financial markets demonstrated their strength during the crisis, so there is none of the huge regulatory overhaul now being seen in the US for companies to contend with.

As a result of this perceived strength and stability, both domestic and international investors are once again keen to participate in the Canadian capital markets. In line with the rest of the world, capital market access was limited in the first half of 2009, and available liquidity shrank. As the markets regained some color, the decrease in credit extension from banks began to be compensated for by strong demand for corporate and financial paper in general.

"Over the last six to eight months the biggest change is that corporates are now able to access the capital markets again," notes one investment manager from a big US bank with operations in Canada. "Canada was slightly less challenged than the rest of the world. We have seen a whole slew of issuance that came early on in the second half of 2009—a backlog of 2008 deals that were put on hold—and they have generally been received very positively."

Brad Nelson, president and chief operating officer of PCL Constructors, the Canadian operations of industrial and construction company PCL, says: "The capital markets were a little bit tough for a while, but for strong companies the money was available. We see no problem for companies now accessing the capital markets."

Opportunistic Capital-Raising
Although a lot of issues seen in the past few months have been from familiar names—in particular, the financials—there have also been some less well-known names come to market. For example, Husky Energy launched a highly successful C$700 million bond in March, upped from C$600 million on the back of strong demand. The company, which had previously issued only into the US market, is rated BBB+ by Standard & Poor's.

Some observe that the demand for bonds is so great that companies with no specific reason for issuing debt are coming to market simply because of the opportunity to raise funds cheaply. The proceeds of such issues are being used for debt retirement and general corporate purposes.

Canada also contrasts sharply with much of the West in that most corporates are relatively liquid and well funded right now so they do not have a lot of need to issue paper. However, those that are anticipating funding needs in the future are borrowing opportunistically to take advantage of the relatively cheap rates.

From an investor perspective, the bond markets are seeing widespread investor interest across much of the curve, going out no further than 10 years and primarily in the five-year space. The Canadian financial sector has seen particularly strong international demand because of the perceived strength of Canadian banks compared to their neighbors to the south and their limited risk exposure to the crisis.

Says the US investment manager with operations in Canada: "At the beginning of the recovery here, investors were naturally cautious and purchased higher credit quality names. But as spreads compressed and people felt more comfortable, they began to look further down the credit curve—looking at weaker credits to get more bang for their buck. But to me it seems perhaps a bit early; appetite has returned perhaps a bit too strongly. The risks are still out there in the early part of recovery."

In addition to the financial sector, another sector that has seen strong growth, and strong interest from international investors, is infrastructure development and project finance. According to David Kierans, a partner at law firm Gowling Lafleur Henderson, the infrastructure project market this year is more stable and active than it was a year ago. "There is a lot more activity now," he says. "We see more confidence in the marketplace and more banks willing to look at projects."

Infrastructure projects, in particular those using a public-private-partnership (PPP) framework, have flourished, helping to drive construction growth at a time when many other sectors were suffering under global heaviness. Nelson notes that the pent-up demand for infrastructure development within Canada required a mechanism to get projects to market quickly. PPP is "an ideal mechanism to get a project built," he says. "It is not ideal for every project, but it has worked well for a lot...over the last several years. It is an excellent vehicle to get a project off the drawing board and turned over quickly."

This structure was helpful in taking advantage of a lot of the federal stimulus funding available for shovel-ready projects, which has resulted in an uptick in construction activity in general. Relatively

large amounts of federal and provincial government funding have found their way into projects by way of milestone payments—paid when a project fulfills certain construction targets—and substantial completion payments once the project has been constructed.

The number of projects either now under way or in the pipeline is enormous. A few of the big ones include the Southeast Stoney Trail in Alberta; the McGill Hospital and the CHUM Research Centre in Quebec; the A-30 and A-25 roads projects in Quebec; the Pan American Games projects that are upcoming in Toronto; the Route 1 road project in New Brunswick; numerous hospital projects in Ontario and British Columbia; the South Fraser Perimeter road in British Columbia, with the North Fraser Perimeter road project to follow; the Windsor-Essex Parkway in southwestern Ontario; and a number of other road, transit and subway projects in Ontario.

At first the Canadian PPP market was dominated by foreign banks and developers. However, that is changing. "It took a while for Canadian contractors, banks and domestic equity funds to figure out how to participate successfully in the programs, but there is now significant domestic participation and capability," says Bert Clark, Canadian head of global infrastructure finance at Scotia Capital. "In fact, the Canadian debt capital markets have allowed the [PPP] programs to continue when programs in many other jurisdictions have stalled as a result of the financial crisis."

Nelson agrees, adding: "Initially, I would have said interest was all overseas. From Australia and Europe in particular we saw a lot of demand. But now we are seeing the Canadian banks jumping in in a big way. But there is still a large contingency of finance coming from overseas." Foreign participation in funding has primarily been through private placements, although there have been a few rated deals as well.

As global economies regain momentum, foreign investors and developers are looking again to the Canadian market for investment. The European banks are once again providing funding for Canadian projects, and European and US developers are joining with Canadian firms on bids for large projects. Nearly every major European infrastructure company has had a look at the Canadian market, and a good number of them have set up offices and are actively involved in bidding and building projects there. There are also a number of US construction companies involved in the roads sector and, increasingly, in the social sector.

"Recently, there has been increasing appetite amongst European, particularly German and Spanish, firms to participate in the infrastructure market in Canada," notes Grant Headrick, vice president of public finance at Canadian ratings firm DBRS. "Broadly that is a good thing. Whenever you can bring global expertise and pair with local experience, it should lead to more cost-effective solutions. Given the now relatively established nature of PPPs in Canada, international firms are actively bidding on projects, and that is likely to continue going forward."

As government spending winds down somewhat over the next few years—particularly the pace of spending in Ontario—there may be a return to more traditional forms of financing for these projects, with lower amounts of government funding during the construction phase. "While it has positive attributes, such as denoting the commitment of the government to the project and the means of delivery, increased government funding during construction can also reduce the ability of a project to deal with potential cost increases during operations, as well as cost overruns during construction," says Headrick.

In the meantime, though, there is little doubt that the government's commitment to infrastructure finance is helping Canada's economy to continue to thrive.