A sharp drop in world equity markets triggered a host of cancellations and postponements of planned initial public offerings in early May. Many of the proposed IPOs will remain shelved for an extended period until confidence is restored to the markets, bankers say.

Several major deals that did come to market amid the turbulence stumbled badly in their debuts. Two big IPOs in Poland and South Korea performed well, however.

The $2.5 billion IPO of PZU, the partly government-owned insurer, rose more than 15% in its first day of trading on the Warsaw Stock Exchange. The Polish government plans to realize $10 billion from asset sales this year to help reduce its deficit. Power producer Polska Energia is the next government-owned company to be offered for sale this month, market conditions permitting.

Another offering that bucked the weak IPO trend was Samsung Life, based in South Korea, which raised $4.4 billion in the largest IPO worldwide to date. The insurer's shares rose nearly 4% in their first day of trading in Seoul on May 12. Goldman Sachs and Korea Investment Securities were lead coordinators of the offering. Bank of America Merrill Lynch, Morgan Stanley and Shinhan Investment also managed the sale.

Most of the new equity offerings recently have found the market to be less welcoming. Essar Energy, the largest listing ever on the London Stock Exchange by an India-based company, fell 7.4% in its debut, after cutting the price and reducing the size of the offering to $1.95 billion from a previously announced $2.5 billion. Indian conglomerate Essar Group, controlled by the Ruia family, sold 23.4% of its energy business in the IPO, which was handled by Deutsche Bank and J.P. Morgan Cazenove.

Niska Gas Storage Partners, a Houston-based company that operates natural gas storage facilities in the US and Canada and trades gas for its own account, slid 6.8% in its initial day of trading on the New York Stock Exchange on May 12. Goldman Sachs and Morgan Stanley managed the offering.

Meanwhile, MIE Holdings, a China-based oil and gas producer trying to list on the NYSE, failed to price its IPO on May 12 and the offering was postponed. The pricing was originally scheduled for May 6, the day the Dow Jones Industrial Average fell 1,000 points before rebounding. The size of the proposed offering was reduced to 12 million American depositary shares from 18 million.

Several major Asian IPOs were postponed amid a sharp drop in equity markets and worries about potential monetary policy tightening in China. Swire Properties, a spinoff from Swire Pacific, was planning to raise up to $2.7 billion in a Hong Kong listing but canceled the IPO after market conditions worsened. The offering would have been the largest in more than a year on the Hong Kong Stock Exchange.

China-based New Century Shipbuilding canceled a planned $483 million offering in Singapore that had already been downsized. The issue was pulled due to technical problems and not because of deteriorating market conditions. It would have been the largest IPO in Singapore so far this year.

Meanwhile, Agricultural Bank of China applied May 4 with the Hong Kong Stock Exchange for what could be the world's largest IPO ever. The state-owned bank plans to raise as much as $30 billion in a dual listing in Hong Kong and Shanghai. The IPO could come as early as next month, ahead of other planned share sales by banks in China and before the People's Bank of China further tightens its monetary policy.

China's central bank announced last month that it would increase the ratio of reserves that banks must set aside as deposits by half a percentage point to 17% for large financial institutions. 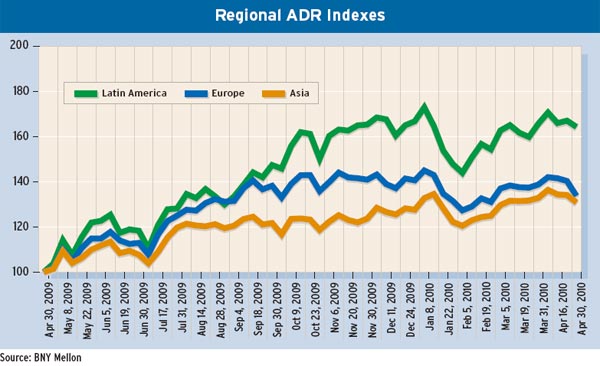