A centralized approach to Islamic finance is helping Asia develop an industry that may challenge the Middle East as the global hub. 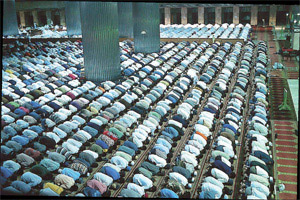 The Middle East is often thought of as the spiritual home of Islamic financing, and for good reason. According to some estimates, the bulk of Islamic financial assets (40% of total global assets) are held by Iranian banks, and the first full-service Islamic bank opened its doors in Dubai in 1975. However, as Islamic financing has grown in popularity, more than 70 countries around the world now boast Islamic banks.

Outside the Middle East, the next biggest hub for Islamic financing is Asia, which is home to more than 60% of the world's Muslim population, according to Pew Research Center. Rejina Abdul Rahim, managing director of Nomura Asset Management Malaysia, says the emergence of Asia as a center for Islamic finance is relatively new. But, partly as a result of Malaysia's aggressive marketing of Islamic finance, she notes, Islamic finance has started gaining ground in Asia, with the key financial centers of Singapore and Hong Kong joining in the growth. "The present state of the global Islamic finance market is concentrated in two geographic centers—the Middle East on one side and Asia on the other," says Afaq Khan, head of Islamic Banking at Standard Chartered Bank.

Within Asia, Malaysia is arguably—and not surprisingly—at the forefront, boasting one of the largest Islamic financial markets in the world, with assets totaling $116 billion. It also has a more than 60% share of global sukuk or Islamic bond issuance, with $66 billion in private and public sukuk outstanding at the end of June 2009. Khan says Malaysia was one of the early leaders in Islamic finance thanks to the government and central bank promoting the development of Islamic finance in the country since the early 1980s. "This includes modifying the regulatory regime to put Islamic finance on a par with conventional finance, and sometimes even providing incentives to promote Islamic financing."

Malaysia started its journey in the 1960s with the establishment of the Pilgrims Fund Corporation, which managed investors' savings according to Islamic teaching. Malaysia's first Islamic bank, Bank Islam Malaysia, followed in 1983, and in the 1990s Malaysia established its sukuk market, which spearheaded a number of world firsts, including the first global sovereign sukuk. In 2006, eager to share its experience with the rest of the world and to transform Malaysia into an innovative and competitive Islamic financial hub, the country set up the Malaysia International Islamic Financial Center (MIFC).

Dubai's Woes Boost Asia
In the wake of the widely publicized sukuk defaults in the United Arab Emirates and Saudi Arabia last year, Malaysia's story holds even more resonance with the global Islamic financial services community. "We [Malaysia] have not had significant defaults and confusion over the status of some sukuk products," asserts Mohammad Faiz Azmi, a partner at PricewaterhouseCoopers Malaysia and the consultant's global Islamic finance leader. "Due credit should be given to our regulators, who have not only successfully managed these risks but at the same time encouraged innovation and expansion."

At a summit held last November in Kuala Lumpur by the MIFC, Bakarudin Ishak, assistant governor of Bank Negara Malaysia, the country's central bank, said that the majority of sukuk that came out of the Gulf Cooperation Council (GCC) countries were real-estate based, while in Malaysia most of the sukuk is in the oil and gas sector. "[It is about] quality issuance versus unrated paper," he stated. Unlike the Middle East, Malaysia also has the advantage of an active secondary market in sukuk.

"We did not develop sukuk out of the blue," says Nik Ramlah Mahmood, managing director of Securities Commission Malaysia. "We provided the regulatory framework that provided certainty to issuers of sukuk. Sovereign sukuk added credibility [to the sukuk market], and large primary market issuance supports secondary trading of sukuk." Khan of Standard Chartered draws the distinction between Malaysia, where the sukuk market is an integral part of the domestic capital markets, and the Middle East, where there is large-scale sukuk issuance, but most of it is international.

Malaysia has also spearheaded other Islamic financing innovations, including the development of shariah-compliant REITs (real estate investment trusts). It was also an early proponent of the commodity murabahah for liquidity management. "Many of the newer innovations in Islamic finance are being developed in Asia, which makes it an exciting place to be for Islamic finance professionals," says Azmi of PwC. He says Malaysia's experience and infrastructure are attractive to both foreign and conventional players, with four foreign Islamic banks already operating in Malaysia and the global Islamic head of a foreign group soon relocating to Malaysia from the Middle East.

However, some segments of the Islamic finance community emphasize the differences between shariah jurisprudence in Malaysia and in the Middle East. While there are four different schools when it comes to shariah thinking, with Malaysia belonging to the Shafii school, Azmi says, as far as Islam is concerned, all schools' views are acceptable.

"You have to appreciate that Malaysia follows a centralized model of shariah compliance," Khan of Standard Chartered explains, "as compared to the Middle East, where every institution follows the guidance of its own board. This centralized system has helped Malaysia become what it is now in terms of a well-regulated and developed regime."

Regional Growth
Malaysia may have the region's best-developed Islamic financial markets, but other countries within Asia are also making inroads. Indonesia's central bank outlined its blueprint for Islamic banking back in 2002, and in 2008 enacted legislation to enable the government to issue sovereign sukuk. In Thailand, where Islam is the second-largest religion, the first Islamic banking window was introduced in 1998, with the first fully Islamic bank, Islamic Bank of Thailand, being established in 2002.

Islamic financing is also spreading to other Asian countries that do not necessarily have large Muslim populations but want to attract new sources of capital. "There have been news reports about Hong Kong and Korea working to amend their regulatory, tax and legal systems to allow Islamic banking products and services," says Khan.

Hong Kong is stepping up its Islamic financing activity, with the Hong Kong Monetary Authority applying to become a full member of the Islamic Financial Services Board (IFSB). In May 2008 Hong Kong's Securities and Futures Commission (SFC) and the Dubai Financial Services Authority (DFSA) also signed a memorandum of understanding to establish mutual cooperation in Islamic finance.

Rahim of Nomura says that Singapore appears to be making more headway than Hong Kong. In January 2009 Singapore became the first non-Muslim-majority country to establish a local currency sovereign sukuk. "For Singapore, we see shariah-based financing as an extension of our current role as an international financial center with strengths in banking, insurance, capital markets and fund management," a Monetary Authority of Singapore (MAS) spokesperson stated.

Khan describes Singapore as more of an offshore financial center for southeast Asia. "So while it may not develop a large domestic Islamic finance industry, it can certainly develop into an offshore Islamic finance hub, as it is for conventional banking and finance," he explains.

Much like Malaysia, Singapore's objective is to treat conventional and Islamic financial products similarly by modifying regulations and tax treatment to ensure a level playing field between both. The MAS spokesperson highlights how Singapore "fine tuned" its regulatory regime in 2006 to facilitate the offering of murabahah financing by Singapore banks. It has also worked to level the playing field in terms of tax treatment of Islamic financial products versus conventional products by removing double stamp duties for sukuk and implementing a 5% concessionary tax rate for qualifying shariah-compliant activities.

Representative of Singapore's growing status as an Islamic financial center, last year it hosted the sixth annual IFSB summit, the first time it has been held in east Asia. Only time will tell whether Singapore can emulate Malaysia's success. Azmi says it depends how open and supportive governments are toward Islamic finance. "They can be more supportive of Islamic finance by offering incentives or developing it," he explains. "Secondly, they should try having the same regulatory framework for both conventional and Islamic finance to reassure investors and consumers. Thirdly, adoption of international best practices should be the norm, not the exception."

Growth prospects for Islamic financing in Asia look promising, particularly given that the region is expected to be a major driver of economic growth. As long as Islamic financing can provide what issuers are looking for, Rahim of Nomura says, nothing should prevent Islamic finance from growing aggressively in Asia. "The key is comparability," she explains. "Islamic financing must be able to provide issuers and investors alike with a cost-effective and viable alternative to conventional financing."

Given its strong and accommodating regulatory infrastructure, a shariah view that recognizes innovation, and players that are incentivized to innovate, Asia is expected to play a major role in shaping Islamic financing. Khan of Standard Chartered believes that the Middle East and Asia will play equally important roles.

"There is a concerted effort by industry bodies such as AAOIFI [Accounting and Auditing Organization for Islamic Financial Institutions], IIFM [International Islamic Financial Market] and IFSB to develop common shariah compliance, regulatory and accounting standards across all Islamic markets," Khan points out. "Given this close collaboration, cross-fertilization of ideas and thinking should result in the Islamic industry going to the next phase of innovation and growth."