A flurry of bond issues illustrates the growing confidence west Africa’s nations have in their economic and political futures. Nigeria and Côte d’Ivoire are leading the way. 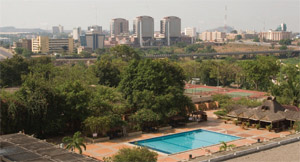 The contrasts in west Africa are huge. At one end of the scale is oil-rich Nigeria. Its economy expanded by almost 7% last year and slightly more in 2008, and Nigeria continues to be one of the region's most prosperous countries, despite suffering continuing political uncertainty after its leader spent several months in a Saudi Arabian clinic. Near neighbor Burkina Faso is among the world's poorest countries and has suffered deep economic hardship in recent years, partly due to its lack of natural resources. New gold finds may help change that, though, and investment in the powering of the country's mobile telecommunications network with solar energy is putting Burkina Faso at the cutting edge of a key area of sustainable development—one that may have implications for many other countries in Africa and beyond.

Two conflicting trends determine the longer-term prospects of this massive region of Africa, bounded by Nigeria to the east and Senegal to the west, with Côte d'Ivoire and Benin among other smaller states in between. The first is a growing confidence in their economic position in the wider African region—indeed among emerging markets more generally. The second is a wave of political instability. The extent of this political instability will determine how much the larger countries can benefit from the economic possibilities.

The implications of events in west Africa are critical for the larger African continent. The region has a population of 350 million, and this is set to grow to 480 million by 2030, according to the regional development organization, the Sahel and West Africa Club. Many of the region's economies are also dynamic, with average annual GDP growth rates of 4.5%. Finally, the countries of the region are major exporters, with external trade accounting for 75% of regional GDP. The European Union, United States and China are west Africa's three main trading partners.

The buoyant economic outlook is supported by a quicker-than-expected recovery from recession, a rising oil price (crucially important for many of the region's countries) and some resolution of historic debt issues. The economic managers of west African countries, notably Ghana and Côte d'Ivoire, are showing their confidence by issuing sizable eurobonds. These will become the model for many countries in the continent.

The recent political story, though, is not so optimistic. As Global Finance was going to press, news was emerging that Nigeria's president, Umaru Yar'Adua, had died. Prior to his death, he had not been seen in public for five months, but had refused to hand over the reins to his deputy, Goodluck Jonathan, creating an extremely unstable political environment. The authority of Laurent Gbagbo, president of Côte d'Ivoire, is compromised by the fact that he has repeatedly postponed holding elections. Meanwhile, Niger, a large state to the northeast of the region, recently had its third coup in 14 years.

Offsetting the instability is the authority of ECOWAS (the Economic Community of West African States), which has put pressure on Guinea (an oil-rich country to the west of the region) to put its house in order after a coup. The impressive stability of Ghana shines through as perhaps a model state that has brought together both sound political institutions and sensible economic management.

Economic stability in the six Francophone economies belonging to the West African Economic and Monetary Union (WAEMU) is a key achievement of the Central Bank based in Dakar, Senegal. This authority manages monetary policy for this micro-region's single currency, the CFA franc, which is pegged to the euro. Charles Koffi Diby, Côte d'Ivoire's finance minister, says: "Measures at the community [WAEMU], national and budget levels have helped reduce this inflation rate. And I think the monetary policy of the Central Bank also contributed to the falling inflation rate. At the end of 2009 the average inflation rate was 2%." The sub-region's economy is growing at an annual average rate of 3% to 5%.

While the economic story is strong, the political story is much more complex, says Victor Lopes, a senior analyst at Standard Chartered in Dubai. "For several years we have seen less conflict and declining political risk, but now political risk is an active consideration for investors. At the end of the 1990s there were democratization processes, successful elections and stabilization in countries like Ghana and Senegal. But now there are a lot of issues and questions. That feeds through into economic instability," Lopes adds.

Financial managers in the region were encouraged by the way investors received Côte d'Ivoire's record-breaking $2.4 billion eurobond in April this year. This was the largest bond issued by an African state other than South Africa and was offered to holders of Ivory Coast Brady Bonds, on which the country defaulted a decade ago.

Jerome Booth, the head of research at Ashmore Investment Management, says: "Everybody who has measured their performance against this index bought this bond, unless they really hated the Ivory Coast! Some people who have more understanding of the Ivory Coast and are bullish bought more than 0.75%." Lopes is also optimistic about the bond's prospects. "The new eurobond attracted a huge amount of investors. It will attract real money investors who wouldn't normally be interested in a bond issued by a country without a rating. It will probably be included in a global index and that will facilitate the bond and attract investors," he adds.

The Côte d'Ivoire bond exceeds the aggregate value of all other African bonds. These include a $750 million issue from Ghana, a $750 million issue from Gabon and a $200 million issue from Senegal. The Ghana issue was used to finance an infrastructure project while Gabon used its bond to repay outstanding debt to the Paris Club of bilateral creditors. But the Côte d'Ivoire bond, the principal purpose of which is to provide an exit for holders of defaulted Brady Bonds, may not remain Africa's largest for very long, says Booth. He points out that Angola is planning a $4 billion bond for later in 2010.

Nigeria, a notable absentee from the eurobond-issuing fraternity in Africa, is also expected to pursue this route to capital raising over the coming two years with a $500 million bond. Individual Nigerian states already issue bonds for trading on local markets, and a total of 35 federal and five state government bonds have been launched over the past seven years. These issues have proved the catalyst for a domestic bond market that is the most vibrant in Africa.

Dapo Olagunju, head of group treasury at Access Bank in Lagos, says: "The Lagos bond market is highly liquid. Foreign investors and investors from within the region are very active in these markets. The growth of local pension funds is now ensuring these bonds remain liquid." The launch in March 2010 of a $334 million bond to fund a local infrastructure rail project in Lagos State underlines the scale and liquidity of the market.

Nigeria's Banks Push for Growth
The growing confidence of Nigerian banks has been demonstrated by their entry into the eurobond market as well as by their expansion into local regional markets. Most notable among the innovators has been Guarantee Trust Bank, which issued a $350 million bond in 2007. It followed this up in 2009 with a $90 million corporate bond issue, the first launched by a Nigerian bank. Booth expects more innovative issues from the bank. "They are the most serious of the local banks—almost like the Goldman Sachs of Nigeria," he says. "They push the boundaries and do new deals. By Nigerian standards they are really quite progressive. They also seem to be conservative in their lending standards; they did not blow up during the credit crunch," he adds.

The larger Nigerian banks have vigorously pursued regional expansion to build on their growing base of assets. According to Access Bank CEO Aigboje Aig-Imoukhuede, "Nigeria gives us a platform to create a world-class pan-African bank. We are taking clear steps to have a 15-country footprint within the next three years. We start with west Africa, go to east Africa and then central Africa. Quite a few Nigerian banks will have offices all over Africa." Major Nigerian banks including First Bank, Union Bank and Oceanic have also acquired operations across the French-speaking west African region. Guaranty Trust Bank (GT Bank) has pursued expansion in English-speaking countries of the region.

Nigerian banks compete across west Africa with a number of French banks, which have a historical position as the primary providers of retail and investment banking. BNP Paribas and Société Générale are key players in French-speaking countries such as Côte d'Ivoire and Gabon, for example. Lopes says that "banks in west Africa are still profitable despite the recession. They have had to take some tough measures, like cutting back branches, but for the most part they have survived and continue to be successful."

Not all have fared so well, however. Unwise investments in stocks, which subsequently collapsed, have taken their toll on several Nigerian banks, some of which have been taken over by the state. These are likely to be merged to create a smaller but stronger group.

While the region's banks and economies show rapid growth, the risk of political upset remains a brake on investor confidence. This is no more true than in Côte d'Ivoire, where investors are happy to take a short-term bet on the bond but remain wary of long-term trends. Lopes highlights the political issue: "Politics are the problem. There will probably be delays in elections, and that will inevitably impact on economic performance and public finances." He also believes that the uncertainty around the election might affect pending debt relief from the Paris Club. "That is subject to several criteria of the IMF program," Lopes says. "If there is a background of delays in elections and uncertainty, that can impact on debt relief."

Booth is no more positive. "The country has the second-largest economy in the region and is quite sophisticated. It has a deep financial market, but it has been blighted by war. The political issue ahead of it remains of critical importance. It needs to hold elections. If they manage this peacefully and have a successful transition of power—whether to the incumbent or a new presidential candidate—provided that this process is constitutional, people will be much more positive about the Ivory Coast. Right now those elections hang out there, like a sword of Damocles. The big risk for Ivory Coast is that that sword falls."

The same threat hangs over the region, which has all to play for in an economic sense. It has huge potential but will have to learn to play by international rules and manners if it is to take its place on the world stage.