Reverberations from the debt crisis in Greece rattled through the corporate debt market in early May, causing extremely volatile conditions that disrupted what had been a record flow of new offerings. Investment-grade issuance nearly ground to a halt in what was the slowest start for any month on record, according to Dealogic.

"The unrest on the streets of Athens was a microcosm of the uneasiness working its way through the markets, leading to the dramatic equity market sell-off," says Zach Berg, fixed-income trader at Raymond James & Associates.

Investors fled the equity markets following a 1,000-point drop in the Dow Jones Industrials Average for the relative safety of treasuries. "The rest of the fixed-income markets were taking it on the chin,"Berg says.

Spreads in the US corporate credit default swaps (CDS) market began to widen in late April, according to GFI Group, a New York-based provider of wholesale brokerage and electronic trading support products. Financial firms were among the hardest hit following the Securities and Exchange Commission's suit against Goldman Sachs, GFI says.

"As the market was capitulating, dealers began removing the bid side from the market, in what was reminiscent of another crisis of confidence in the markets during the tumultuous period after the collapse of Lehman Brothers," Berg says. "The shared debt between European financial institutions puts their balance sheets at considerable risk and has already led to increased liquidity concerns in the euro area."

CDS spreads narrowed following the nearly $1 trillion bailout package announced by the European Union and the International Monetary Fund. While the panic eased, the debt markets remained nervous, and heightened volatility is likely to be a feature of the market for some time, Berg says.

News of a 12.8% surge in China's property prices in April and a rise in consumer and wholesale prices raised concerns about a serious inflation problem in Asia. Further tightening byChina and India could slow global growth.

US high-yield bond issuance totaled $27.8 billion in April, still a high monthly total but down from the record $38.5 billion in March, according to Montpelier, Vermont-based KDP Investment Advisors.

"The transaction is not particularly surprising, as the company has indicated that it plans to execute $3 billion to $6 billion of such funding in 2010," says Thomas Ferguson, bond analyst at KDP Investment Advisors. "The offering also gives us incremental confidence in Ford Motor Credit's capacity to fund its lending operations without government support." The company was the largest issuer of high-yield bonds in 2009, selling $4.6 billion worth. 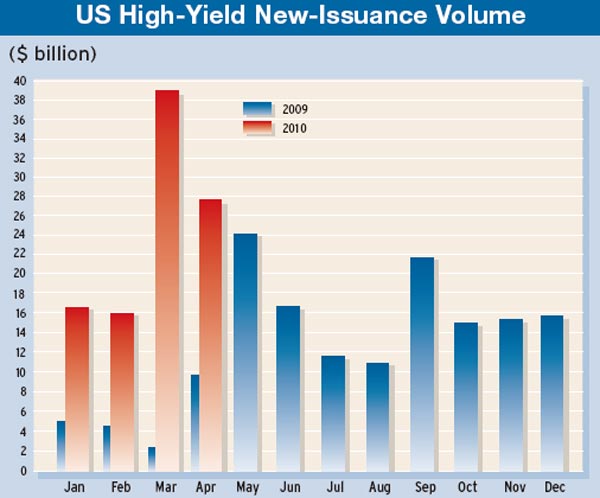 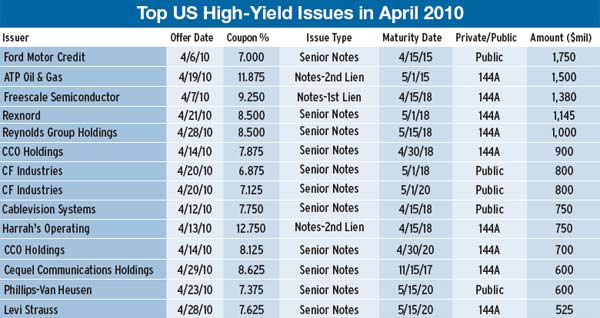