An Oasis Of Calm

Kuwait has been largely unaffected by the winds of change sweeping through the Middle East and North Africa. 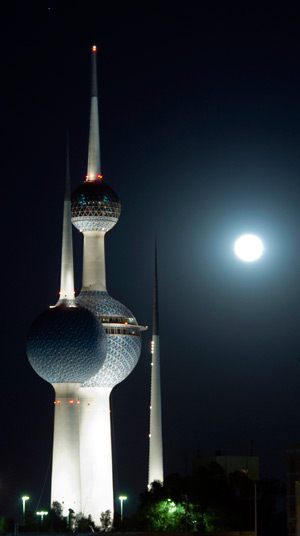 In the 50 years since Britain ended its protectorate and Kuwait became an independent emirate, this Middle Eastern state wedged between Saudi Arabia and Iraq has developed into a major banking and investment center and a wealthy oil-exporting nation that provides its citizens with cradle-to-grave security. The winds of change sweeping the region have stirred little call for doing things any differently in this corner of the Arab Gulf, where life is comfortable.

Kuwait has a parliamentary, constitutional monarchy, with an executive appointed by the emir. The country receives more than 90% of its revenue from oil, and everything else feeds from the oil sector, says Mohammed Akacem, professor of economics at Metropolitan State College of Denver. A native of Algeria, Akacem is faculty director of the Kuwait Study Abroad program at the University of Colorado.

“I have taken US students to Kuwait’s national assembly many times, and we have witnessed surprisingly heated debates,” Akacem says. “There is a lot more freedom in this partially democratic state than in other Arab countries.” Although there are no political parties, the political system is vibrant and progressive, he says.

What’s more, the grievances that are driving revolutionary change elsewhere in the region are absent in Kuwait, which was liberated from invading Iraqi forces in 1991. “The people have it pretty well, and I don’t see why any groups would agitate,” Akacem says. “The issues such as unemployment and low income are not there.” The unemployment rate is 1.6%, and 80% of the work force are employed in well-paying government jobs.

To mark the 50th anniversary of Kuwait’s independence, as well as the country’s 20th Liberation Day and the fifth year of his rule, Emir Sheikh Sabah al-Ahmed al-Sabah ordered that 1,000 Kuwaiti dinars (more than $3,500) be distributed to every citizen, as well as free food for 14 months. While other Gulf Cooperation Council (GCC) states have announced significant spending plans just this year to head off potential unrest, the government of Kuwait has made similar but smaller grants in the past. Akacem says the message behind the latest gift was, “We have always taken care of our citizens.”

Revenue gains from higher oil prices should provide ample funds for increased government spending without affecting the fiscal balance, economists say. Kuwait, the fifth largest OPEC producer, is expected to post its 12th consecutive budget surplus this year. Meanwhile, the International Monetary Fund is projecting 5.3% growth in Kuwait’s gross domestic product in 2011. Although that forecast could change if the price of oil were to suddenly decline, Kuwait has invested its accumulated surpluses wisely. The Kuwait Investment Authority, Kuwait’s sovereign wealth fund, manages a general reserve fund as well as the Future Generations Fund, which receives 10% of all oil revenue. Kuwait’s financial assets exceed $300 billion, and the KIA invested billions of dollars to bail out US financial institutions during the 2008 financial crisis.

The government plans to spend more than $100 billion on Kuwaiti infrastructure development in the next five years, as it seeks to diversify the oil-based economy. The long-term goal is to make the country a world-class financial center and energy hub, with the further development of petrochemicals and other downstream industries.

Disputes between the government and the parliament have derailed major projects in the past, especially those involving foreign companies, such as a $17.4 billion joint venture with Dow Chemical, which was planned to market petrochemicals and plastics. In February 2010, however, the political logjam was broken and the country’s development plan was passed under the banner of Kuwait Vision 2035.

The public-private partnership (PPP) supporting the development plan will need the backing of the country’s banking system if the private sector is to get the financing it will need to boost its proportion of the economy. Private sector financing is expected to account for about half of spending for projects. New bridges, hospitals, housing, ports, roads, schools and a metro system are on the drawing board.

The government is moving forward, slowly but surely, with tenders and awards of large projects, as well as with the formation of new PPP companies as part of the five-year plan, says Ibrahim S. Dabdoub, group CEO of NBK, parent of National Bank of Kuwait. Two or more of these companies, Kuwait Health Assurance and Zour-North, a water and power project, should be unveiled in the coming months, he says.

“The new companies will, in time, start hiring, which will energize the economy further in the period ahead and induce a very positive environment for banks” Dabdoub says. “[Kuwait’s] banks are well capitalized, very liquid and eager to do business and do their part in financing the five-year plan.”

Kuwait’s economy is on the mend, and NBK expects growth in GDP in excess of 4% this year and in the following year. Higher oil production and prices are boosting the hydrocarbon side of the economy, and state finances are in great shape, Dabdoub says.

“The consumer sector was the least affected by the global financial crisis and was the first to recover,” he says. “Consumer banking and lending is doing well.” The real estate sector is also seeing renewed vigor, but the primary growth engine on the domestic front will be the government’s development plan, Dabdoub says.

“Even if not all of the planned projects materialize, we expect an improvement over last year, which should reflect on loan growth, which was nearly absent last year,” he adds. “Improvement is also expected on the consumer side of the business, as the market seems to have finally digested new lending constraints introduced by the central bank last year, while benefiting from the boost to household income provided by recent increases in government salaries.”

In terms of deposits, the whole banking sector in Kuwait is highly liquid, and the resources available to the government are sufficient to meet any funding needs, even in the most dynamic growth environment, Dabdoub says.

The new regulations will act as a constraint on the investment sector and will force companies to operate more conservatively without taking unnecessary risks, which will increase stability, says Manaf Alhajeri, CEO of Markaz, Kuwait Financial Center. The stricter liquidity ratios should provide a good buffer against negative shocks, he says.

The KSE has been volatile this year. At the end of April the Kuwait Market Price Index was down about 6% for the year to date, but it experienced a 4% gain in April.

“The banking index is the only sector which is positive for the year, up about 5%,” Alhajeri says. “Banks are considered a safe haven of the market and have been performing well, so we would expect that to be carried through the second quarter.”

An Oasis of Calm

The political turmoil elsewhere in the Middle East and North Africa region is unlikely to have a major impact—either positive or negative—on Kuwait’s future as a financial center, Alhajeri says. Dubai and Qatar are more likely to benefit from capital flight prompted by the regional political turmoil, as they already have the regulatory infrastructure laid out to support such a status, he says. MSCI is considering upgrading the United Arab Emirates and Qatar to emerging market status from their current frontier status, he notes.

In addition to banks, penny stocks are attracting local investors in Kuwait. Alhajeri says. “These small-cap stocks have been seeing increased liquidity, as they tend to hold up well in times of uncertainty,” he says. “Petrochemicals are also likely to continue to post gains across the region, supported by healthy crude oil prices.”

Meanwhile, the country’s innovative telecommunications firms—Mada, Wataniya and Zain—are expanding in fast-growing emerging markets of the region and beyond. Last year Zain accepted an offer from Bharti Airtel, India’s largest mobile telecom operator, to purchase the bulk of the African assets of Zain for $10.7 billion. Not every deal has gone smoothly, however. Earlier this year, UAE-based Etisalat scrapped a nearly $12 billion plan to buy 46% of Zain, citing the political turmoil in the region and the lack of consensus between Zain’s shareholders.

While Kuwait’s non-oil sector will gradually expand, it is not yet a major force in the overall economy, economists say. There is no urgency to transform the economy because of the accumulated oil wealth that has been carefully invested. Nor is there any of the pressure that some other Arab states face from a large population of unemployed or underemployed youth.