Amid the steepest decline in commodity markets in years, Glencore was looking last month to bring London’s largest-ever IPO to market.

The company was seeking to raise about $11 billion, including a $1 billion overallotment, in its dual-city offering. A $318 million portion of the sale was aimed at retail investors in Hong Kong. Glencore did its best to put a positive spin on the situation. Ivan Glasenberg, Glencore’s CEO, told a Hong Kong conference via a video link that the dive in commodity prices would not affect the company’s strong underlying fundamentals. Growing demand from fast-growing emerging markets would remain a bullish influence for commodities, he said.

Sovereign wealth funds from Abu Dhabi and Singapore, as well as other “cornerstone” investors, seemed to agree with this assessment. They committed to invest more than $3 billion in the IPO, helping to cover the offering a day after it was officially launched.

“We are pleased to count ourselves as the largest new shareholder of Glencore, post its IPO,” Khadem Al Qubaisi, chairman of Aabar Investments, said in a statement. The Abu Dhabi–based sovereign wealth fund confirmed an investment of $850 million, with an intention to stump up an additional $150 million in Glencore’s global offering.

Abu Dhabi’s production of petrochemicals and hydrocarbons make it a potential partner with Glencore in the resources space, Al Qubaisi said. “The investment is consistent with our policy of investments and strategic partnerships with global, market-leading businesses, and we are looking forward to a successful partnership with the company,” he said. Aabar’s largest stakeholder is the International Petroleum Investment Company, which is owned by the government of the emirate of Abu Dhabi.

Singapore’s biggest sovereign wealth fund also agreed to take a large stake in Glencore. China-based Zijin Mining agreed to make a $100 million investment. Citi, Credit Suisse and Morgan Stanley led the IPO, which was the third largest in Europe after the privatizations of Deutsche Telekom and Enel.

Glencore’s shares were due to begin trading on May 24 in London and May 25 in Hong Kong. The IPO would be the biggest worldwide since General Motors raised $20 billion in November 2010, in its return to the public markets. The US government still holds 33% of the automaker and may sell more shares later this year.

Glencore is stockpiling ammunition for the ongoing consolidation in the mining sector, and would like to turn its 34% stake in Xstrata, a global mining company listed in London and Switzerland, into full control and to make other opportunistic mergers.

Meanwhile, Dunkin’ Brands filed for a $400 million IPO. Shares of the Canton, Massachusetts–based coffee and donuts purveyor will trade on Nasdaq.

In DR developments, Singapore Exchange said it would add eight more American depositary receipts to its GlobalQuote board on May 18. Five of the ADRs are for Japan-based companies: Mitsubishi UFJ Financial, Mizuho Financial, NTT DoCoMo, Toyota Motor and Wacoal Holdings. The other ADRs are for China-based Focus Media and JA Solar Holdings, as well as Posco, the South Korea-based steelmaker.

SGX introduced ADR trading last October and already trades US-listed shares of China-based companies. The service enables local investors to deal in the companies during their own trading hours.

Deutsche Bank was appointed as depository for the Level I ADR program of Minerva, a Brazil-based meat-processing company. The German bank also was chosen as the depository for the global depositary receipt program of HRT, one of the largest independent oil and gas companies in Brazil. HRT’s DRs trade on TSX Venture Exchange in Toronto. 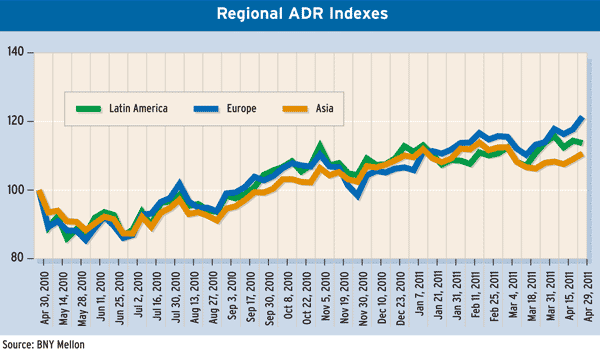