China is planning major investments in foreign companies, including those in the US, in order to help turn its mountain of paper dollars and other currencies into hard assets and to obtain the technology and resources it needs to keep its factories humming. 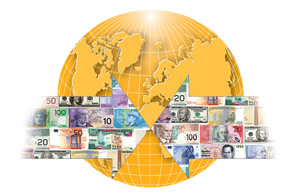 The fast-growing Asian country passed the US last year as the world’s largest manufacturer, and it is increasingly worried about its growing hoard of dollars, analysts say.

China’s foreign currency reserves surged by more than $197 billion in the first three months of this year to a record $3.05 trillion, giving the country a huge exposure to the weakening dollar. More than $1.15 trillion of its reserves are invested in US treasury securities. In April, Standard & Poor’s cut its credit outlook for the US to negative from stable, saying there is a risk the country may not come to grips with its long-term fiscal problems.

Xia Bin, a member of the Monetary Policy Committee of the People’s Bank of China (PBOC), said that the country only needs about $1 trillion of foreign exchange reserves and that the rest (more than $2 trillion) should be directed toward strategic investments.

“All of these comments suggest a reduced patience [by China] for the status quo,” says Win Thin, global head of emerging markets strategy at Brown Brothers Harriman, based in New York. “The current way of doing things is being called into question.”

Until the Chinese renminbi is allowed to float freely, the PBOC will always be facing inflows of dollars that it must mop up, Thin says. “Even a big, one-off revaluation [of the renminbi] is unlikely to turn away the money that is flowing into China, both from trade surpluses and investment inflows,” he says.

China’s ODI totaled nearly $60 billion in 2010, making the country the world’s fifth largest exporter of capital, according to Qu. Now that China has overtaken the US as the world’s largest manufacturer, what it needs to do next is to acquire better technology and to establish a global distribution network for its products, especially in emerging markets, he says. “This means much more cross-border mergers and acquisitions in the coming years,” Qu says.

Zhu Guangyao, China’s vice finance minister, urged the US last month to provide a favorable legal and institutional environment for China-based companies that want to invest in the US. He particularly urged the US government not to discriminate against China’s state-owned enterprises.

Money is not an issue, given China’s still-strong net dollar inflows, according to Qu of HSBC. “In fact, Beijing sees the corporate sector’s outbound investment as a key substitute for foreign exchange reserve accumulation,” Qu says. Most of the ODI will be done by China’s state-owned enterprises, as well as its sovereign wealth funds. China plans new investment funds for energy and precious metals, as well as a currency stabilization fund.

The dollar’s real trade-weighted index last month fell to near the lowest level of the floating-exchange-rate era, which began in the early 1970s. David Woo, head of global rates and currencies research at Bank of America Merrill Lynch, who is based in New York, said in a recent report: “To a great extent, this reflects intensifying concerns about unsustainable US fiscal policy and the fact that QE2 [the second round of the Federal Reserve’s quantitative easing] has artificially reduced the risk premium of US government bonds to below the level necessary to compensate investors for the worsened US fiscal position.”

These issues will come to a head at the end of June, when QE2 is scheduled to end and the US debt ceiling will have to be raised to avoid a potential default. It is likely that some limited progress will be made on the fiscal front and, coupled with the end of QE2, this will give the dollar a short-term boost, Woo says. There is a risk, however, that there could be a fiscal crisis in the US, which could leave the Fed as the buyer of last resort for US treasury debt, he acknowledges. “This would accelerate the process of the dollar’s demise as the global reserve currency and cause it to decline in a disorderly manner,” Woo says.

Catalysts for the dollar’s broad-based decline include the slower US economic growth in the first quarter, the early tightening by the European Central Bank, and rate hikes in many other countries, says Jeffrey Young, managing director and head of North American foreign exchange research at Barclays Capital, based in New York. “But behind any broad dollar decline there is generally the US deficit and its financing,” Young says.

“Greater currency flexibility by China means that Chinese savings are not transferred as automatically to fund US deficits,” he says. “The US deficits will have to be financed elsewhere.” To attract savings, some combination of a weaker dollar and higher US interest rates would be necessary, according to Young.

Barclays Capital forecasts about 5% appreciation of the renminbi against the dollar over the next year. “However, the possibility of a large move [in the Chinese currency] may increase the weaker the dollar gets, or the greater the perceived need in China to stem inflationary pressures,” Young says.

The PBOC raised interest rates four times since last October—most recently in early April—and is expected to tighten further. The renminbi has appreciated by about 5% through early May since China ended the dollar peg in June 2010 in favor of tracking a basket of currencies.

“Even after cyclical conditions improve and the Fed raises interest rates—which we do not expect until mid-2012—the dollar will probably not rally as much as it would have in the past, reflecting the greater financing constraints on the current account deficit,” Young says.

The British pound is another currency that has fallen to the lowest level against the major currencies since the Bretton Woods agreement collapsed in the early 1970s. “Sterling will face an ever-increasing headwind over the next 18 months, as austerity measures and falling real incomes batter the wider economy and consumers alike,” says Nick Beecroft, Redhill, UK–based senior markets consultant at Saxo Bank, a specialist in online trading. “I think the foreign exchange market has yet to truly assimilate how tough things could get for the pound over the next few months and years, as market [participants] continue to push back their estimates of the quantum and timing of UK interest rate rises, and the ECB [European Central Bank] maintains a relentlessly tough anti-inflationary stance,” Beecroft says. He predicts that the Bank of England will leave rates where they are until 2013.

The ECB left its benchmark interest rate unchanged at 1.25% on May 5, in line with market expectations. In the accompanying press conference statement, however, the key words “strong vigilance is warranted” were notably missing. “The ECB does not want to signal its intent to raise rates at the June meeting,” says Michael Woolfolk, a managing director and senior currency strategist in the global markets business of BNY Mellon. The result was a sudden sharp drop in the euro and a rebound in the dollar, as well as a sell-off in commodities. Oil prices plunged more than 8%, driving the main US oil-futures contract to below $100 a barrel.

“While [ECB president Jean-Claude] Trichet may not have intended it, failure to signal a rate hike in June fed into a rising wave of risk aversion,” Woolfolk says. “The size of the dollar’s rebound was merely a reflection of the degree to which it had become oversold.”

Woolfolk says a correction in the dollar was long overdue and it was only a matter of time before an event, even something relatively trivial, triggered its reversal of trend.

“Trichet appears to have killed two birds with one stone: pricking a speculative bubble in risky assets and ending the euro’s rally,” Woolfolk says.

Stronger-than-expected US job growth in April helped the dollar to extend its newfound gains, which were the biggest since January 2009. The increase of 244,000 in non-farm payrolls in April was the largest in a year. The unemployment rate rose to 9% from 8.8% in March, which analysts attributed to discouraged workers returning to the labor force.

“While the unemployment rate has temporarily moved back to 9%, this is not entirely unexpected, given broad-based skepticism over the pace of its recent decline,” Woolfolk says.

Standard & Poor’s downgraded Greece’s credit rating by two levels on May 9, providing another impetus for investors to sell the euro. The downgrade heightened concerns that Greece would be forced to restructure its debt, although a withdrawal from the eurozone is highly unlikely, considering the costs to Greece and its partners from a loss in confidence that would result from such a move. According to S&P;, further downgrades are possible for Greece. 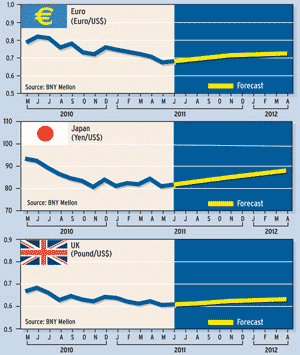 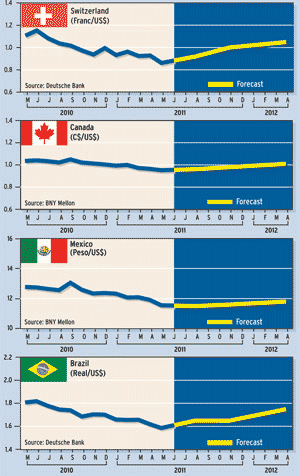