Although the government has pledged to improve the business clime, foreign investors remain skeptical that much-needed reform will happen—at least in the short term. 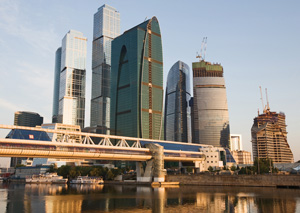 Russia is in a state of flux unseen since Vladimir Putin first took power at the end of 1999. Although he won reelection in the first round of the March presidential race with 64% of the vote, the aura of invincibility that used to surround him and his United Russia Party has evaporated. In the wake of the large-scale street protests late last year and earlier this year, criticism is now commonplace: Even former finance minister Alexei Kudrin has established a think tank—the Civil Initiatives Committee—to provide constructive alternatives to government policy and openly discusses the need for policy change at international events.

Among Russia’s Westward-looking elite and its growing middle class, the feeling is growing that the country must change if it is to successfully advance in an increasingly uncertain world.

“There will be movement and change, but it will be evolutionary rather than revolutionary,” predicts Alexander Plekhanov, senior economist for Russia at the European Bank for Reconstruction and Development.

In part this is because Russia has been doing rather well recently, in broad economic and financial terms. Buoyed largely by continuing high prices for oil and gas, in the first quarter of 2012, Russian GDP expanded at 4.5% year-on-year—1% in seasonally adjusted terms—after growth of 4.7% in the last quarter of 2011.

“The days of 8%-plus growth that we saw before 2007 may be gone, but Russia is outperforming most other emerging markets, including Brazil, often held up as one of the new big-growth economies,” says Charles Robertson, global chief economist at Renaissance Capital.

With inflation at a historic low of around 3.7%, the budget broadly in balance and healthy foreign reserves held by the central bank, there is reason to be upbeat, Robertson adds. Plus, Russia’s generally benign outlook is recognized by the rating agencies: Moody’s rates Russia at Baa (stable), Standard & Poor’s BBB (stable) and Fitch BBB (positive).

Russia looks even better when compared to developed-market economies, still struggling to emerge from the 2008 global meltdown, and to most other emerging markets—barring maybe Turkey and Poland, although both have been undermined recently by their close trade links to the EU. In contrast to these countries, debt is low: Public debt is just 10% of GDP (compared with the 100% now typical in the EU), and the private sector owes the equivalent of just 43% of GDP, against the 200-plus% that now characterizes many developed economies.

However, some market analysts say the risks of a major drop in oil prices coupled with the unresolved euro crisis imparts some uncertainty. “Despite Russia’s strong growth to 2012, we expect headwinds to build over the rest of this year,” says Capital Economics’ chief emerging-markets economist, Neil Shearing, arguing that Russia’s growth model needs to be reconfigured away from one based on consumption to one based on investment.

Reconfiguring the economy will require prodigious reforms, however. In the World Bank’s Doing Business Survey, Russia places 120th out of 183 countries, just three places up on its 2011 ranking. This low score in part reflects the often bewildering situation in Russia’s 83 regions, where wildly different business and legal—not to mention cultural, linguistic and environmental—standards apply.

The authorities have committed themselves to improving Russia’s position within the survey by 100 places, to 20. But a closer look suggests how tough this will be. In “dealing with construction permits” Russia places 178 (out of 183) and, oddly for this energy-producing country, companies wanting electricity will find it harder to get here than in any other country, even last-placed Chad.

At a recent VTB Capital event in New York, former finance minister Kudrin stressed the need for major changes in order to improve the business clime in the country to attract foreign capital. He said that there is no secret on how to boost the ease of doing business score, but it has not been done as yet. He cited the need for strong budget rules that are adhered to by the administration, clear rate policy from the central bank, improved transparency and efficiency in how the government receives revenue, and clear market rules outlined and supported by the government, “so all investors understand [the framework].” He also highlighted the need for reduced bureaucracy, improved clarity and consolidated efforts of all stakeholders in improving business rules. He also discussed the demand for greater basic infrastructure investment.

Shearing adds: “The government needs to start focusing on areas that have been holding back investment, such as property rights and the poor state of infrastructure.” He and others say Russia really cannot afford to give up on reforms—even though historically this is what it seems to do when it has the comfort of high fossil-fuel prices.

Not only is the outlook for the global economy uncertain, which may impact negatively on energy demand and thus Russia’s economic prospects—senior officials, including Putin, acknowledge the risks of such dependence on the sector. Russia had one of the worst contractions on record in 2009, when its GDP slumped more than 8% in response to falling demand for oil and other commodities.

At the time, Kudrin declared that Russia could reduce energy’s dominance in the economy from 25% to around 14% of GDP within a decade. But this will be an uphill task.

Capital that could be helping Russia’s economy is instead being spirited away: Last year around $80 billion in capital flowed out of the country to find a home in such destinations as London and New York.

Bolstering the non-oil sector will become even more important as Russian business starts to feel the effects of WTO membership. Moscow is due to complete all agreements by the end of June, and it will assume full membership 30 days later. Many Russian companies that have hitherto been shielded from the cold winds of competition will have to radically improve productivity and performance if they are to survive.

EBRD’s Plekhanov argues that Russia is seen as a high-risk, high-return destination. “Therefore in an environment of general risk aversion, it looks less attractive to investors. The emphasis now really should be on supporting entrepreneurs and the private sector.”

"Putin should recognize that he and his government cannot just sit back. They cannot just assume oil prices will sustain things"

A recent survey of global investors by Ipreo concluded that in order to maximize interest from foreign investors, Russian companies need to boost corporate governance and transparency. “[Russian companies should] adopt the financial reporting and disclosure practices of developed-market companies, increase the accessibility and visibility of senior management and establish consistent communication with the investment community,” it said.

Over the next year, however, the key factor determining foreign investor sentiment will be the composition of the new government and its appetite for reform. “Markets anticipate little in the way of new reforms or privatization, but there could be some surprises,” says Renaissance Capital’s Robertson. He says it remains official policy to sell stakes in Gazprom, Rosneft, Sberbank and VTB to private investors, presumably once global markets settle. “If or when these IPOs happen, Russia will become flavor of the month,” says Robertson. “But Putin should recognize that he and his government cannot just sit back. They cannot just assume oil prices will sustain things. If they really want the economy to continue doing well, they need to have a plan.”

As part of its strategy to diversify and build up SMEs, Russia's new government could do worse than to promote changes within the banking sector. Russia's ambition is to build up Moscow as an international finance sector—taking full advantage of its location between London and Hong Kong. Important steps have already been made.

Last December saw the merger of Micex and the RTS derivatives exchange, creating the largest stock exchange in the region. The EBRD has taken a 6.29% stake in the combined entity with the aim of helping it bolster corporate governance and transparency. Micex-RTS hopes to pull foreign investors and Russian IPOs away from London, which until now has serviced the lion's share of Russian public equity business.

Plans are also under way to create a national securities depository in Moscow and change legislation to allow foreign entities to hold Russian stock in Russia directly, rather than through local custodians. And soon, Western institutional investors will be able to buy Russian treasury bonds directly, through the National Settlement Depository and Euroclear Bank.

However, the structure of the banking system is still very much a legacy of Soviet times, with five banks dominating the market—Sberbank, which accounts for 50% of customer deposits, and VTB are the biggest—and more than 1000 small banks scattered through the regions.

Private sector loans have been rising—fast. Capital Economics suggests that credit growth in Russia has been rising at an uncomfortably fast pace—a 28.7% rise last year alone with the loan-to-deposit ratio now well above 100%. Although nonperforming loans are just 7.2% of the total (compared with 14.2% in neighboring Romania, for example), the consultancy suggests banks are increasingly reliant on wholesale finance from abroad.

All of this implies that the banking sector must evolve to meet the needs of the broader economy. "Russia really needs to strengthen the second tier of banks," says Alexander Plekhanov, senior economist for Russia at the EBRD. This, he says, would improve financing for all business entities.