The two-part sale of secured and unsecured senior notes was scaled back from an originally planned $3 billion, as the market for high-yield issuers decelerated considerably from earlier in the year. El Paso Corp sold EP Energy in February for some $7.15 billion as part of a $21 billion merger agreement between El Paso and Kinder Morgan, which was announced last October.

The EP Energy deal, handled by a Citi-led arranger group, was the largest offering of high-yield debt in the US market in April. Overall high-yield offerings totaled $18.2 billion in April, down from $31.3 billion in March and less than half of the $37.2 billion in February, according to KDP Investment Advisors.

Another Houston energy company, Plains Exploration & Production, was the largest issuer in the public high-yield market in April. The company sold $750 million of seven-year senior notes through a group of underwriters led by J.P. Morgan.

Standard & Poor’s revised its outlook on Plains Exploration to stable from positive. “Share repurchases undertaken over the last two quarters coupled with weaker natural gas prices are likely to result in more limited improvement in credit protection measures over the near term,” the agency says.

DEFAULTS RISE
Corporate defaults in the US have risen in recent months, due to shaky financial markets and the consistently disappointing economic recovery, according to a report by Moody’s Capital Market Research. “The boom in high-yield issuance [earlier this year] would normally help reduce the default rate by providing better access to financing,” Moody’s says. “But for many companies, it has been insufficient to offset the damage caused by inadequate profit growth.”

Significant numbers of issuers still are finding credit to be very expensive, provided they can gain access to markets at all, the ratings agency says. The US corporate default rate rose 0.9 percentage points in the first quarter to 2.8%, according to Moody’s, although it remains under the long-term average of 4.0%.

IFC GREEN BOND
The International Finance Corp floated its first green bond in the US market, raising $500 million to invest in projects that help emerging markets to cope with climate change.

The proceeds were placed in a separate account to invest exclusively in renewable energy, energy efficiency and other climate-friendly projects in the developing world.

“Green bond issues in the US market have been rare, compared to Europe and Asia,” says Jingdong Hua, IFC vice president and treasurer. “IFC green bonds are an alternative investment opportunity for this market, offering both development impact and a safe investment vehicle of a top triple-A issuer.” BlackRock, TIAA-CREF and the California State Teachers’ Retirement System were among the investors. J.P. Morgan was the lead arranger for the issue. 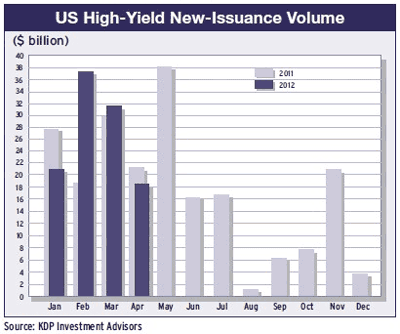