The emerging markets account for an ever-increasing percentage of global investable assets, and the demand for investors' services is growing commensurately. New domestic players are popping up, and global managers are partnering with local firms to get a foothold. 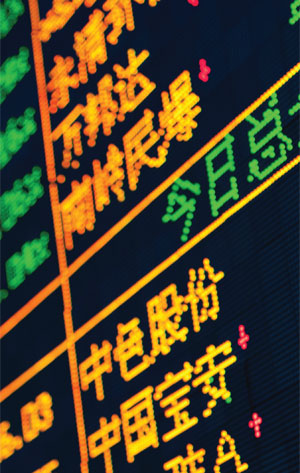 The asset management business is thriving in many fast-growing emerging markets, with countries such as China and India presenting the greatest potential, as the center of global economic activity shifts eastward. Five of the world's top 10 stock exchanges are located in Asia, and a growing middle class is boosting demand for investment services.

The institutional asset management business in Asia, excluding Japan, totaled $8.6 trillion at the end of 2010 and is expected to expand to $13.6 trillion by 2015, according to Cerulli Associates. Of that, Cerulli expects 12.7% to be outsourced to external managers.

Although the developed economies will remain major centers of wealth in the coming decade, it is only a question of time before the largest and most heavily populated emerging economies will also boast the largest asset pools, according to a study released in January by Swiss strategy consultants Roland Berger. Especially high growth rates in institutional assets, which account for two-thirds of total assets, are expected for sovereign wealth funds (SWFs), most of which are located in Asia and the Middle East. SWFs had $4.3 trillion of assets at the end of 2010, led by the Abu Dhabi Investment Authority, with $627 billion.

The best way for asset managers to enter emerging markets is by partnering with local distributors, due to limited market access, according to Roland Berger. Private and retail banks, independent financial advisers and local asset managers could all be potential partners, it says. This entry method is already being practiced by a number of global asset managers. For example, at the end of 2011, Power Corporation of Canada acquired a 10% stake in China Asset Management (ChinaAMC), with $35 billion of assets under management. Deutsche Asset Management, Allianz SE and BNP Paribas also have established joint ventures with local managers in China.

Africa was the fastest-growing region for investable assets from 2006 through 2010, with a CAGR (compound annual growth rate) of 15%, according to Roland Berger. "In a continent that is progressing as fast as this one, this is the time for global investors to take advantage of its continuing growth," notes Nicolas Clavel, founder and chief investment officer of Scipion Capital—an Africa-focused fund management firm.

Asia will be the major driver of future asset expansion, according to Roland Berger, particularly pushed by expansion of the insurance industry—which is seeing phenomenal growth in the region. The Asian institutional investment market is fiercely contested, however, and legal and cultural distinctions raise barriers to entry.

"China's asset pool is expected to grow at 14% per annum between 2010 and 2015," Roland Berger notes, adding that it has potential to reach a CAGR of up to 23%. The institutional market has been resilient to the global financial crisis and is expected to continue to grow at very high rates in China, as a result of increasing insurance premiums and the development of pension funds.

Growing cross-border trade and capital flows between emerging markets could also lead to greater opportunities for asset managers. In the past decade, trade and investment between Asia and the Middle East, for example, has quadrupled. "The Middle East has neglected its historical linkages to Asia," Ahmad Al-Hamad, group managing director of Kuwait China Investment Company and chairman of Asiya Investments Dubai, says. "The 2008 financial crisis accelerated the shift of economic power toward Asia." KCIC was formed in 2005 as a Kuwaiti investment company. Asiya is a subsidiary of KCIC—with Asia its prime investment target.

Mohab Mufti, CEO of Asiya Investments Dubai, says new asset management firms in developing markets generally focus on investments within their particular region, "but we are unique because Asiya is a Gulf-based firm seeking to manage assets in emerging Asia." Asiya also has investments in Hong Kong, where its fund managers and sector analysts assess the performance of Asian economies—excluding Japan. "Investors in the Gulf want long-term strategic access to investment opportunities abroad," Mufti says. "Investors based in Asia also want to make investments in the Middle East. It is a two-way street."

Private equity drives a lot of asset allocation growth in the Middle East (see sidebar), and the mutual funds industry in the GCC has also grown rapidly in the past decade, with a tripling of assets under management and a quadrupling of asset managers.

Corporate and government pension funds are making strides in many emerging markets. China's national pension fund, the National Council for Social Security Fund, received a boost in March when it was entrusted with managing a $15.8 billion portfolio for Guangdong Province. This was good news for BlackRock, State Street Global Advisors, T. Rowe Price, Pimco, BNY Mellon and others who already manage assets for NCSSF.

In Latin America, both Mexico and Brazil have seen pension assets grow by around 14% a year in the five years to 2011, according to a report by consultancy Towers Watson. Mexico's private pension fund managers, the Afores, managed $120 billion of assets at the start of 2011, and Brazilian pension assets reached $342 billion by the same period. 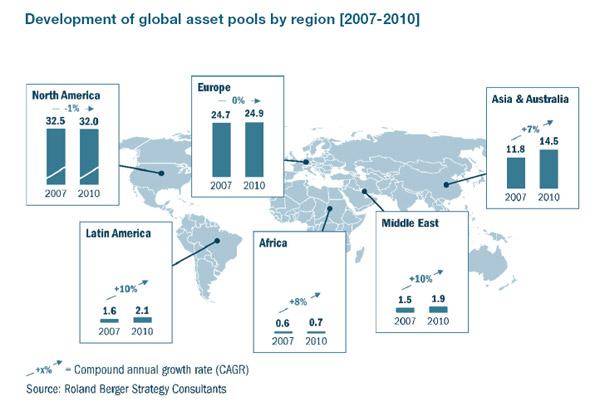 Private Equity could become the arbiter of capital allocation in the Middle East, according to a study conducted by Markab Advisory on behalf of the Qatar Financial Center Authority (QFCA). Over the past decade private equity industry assets in the Gulf Cooperation Council have grown from less than $1 billion to more than $15 billion. The private equity industry in the GCC is very sophisticated, even by global standards, the Markab study notes: “Private equity funds have long holding periods and require exceptionally talented investment and legal teams. Yet the industry grew at an explosive pace and was homegrown.”

For example, the Qatar Asset Management Company—a collaboration of the QFCA and the Qatar Investment Authority, which manages the country’s sovereign wealth fund—on April 30 announced a strategic partnership with Barclays Natural Resources Investments, a global private equity business with a portfolio of $1.8 billion. QAMC plans to co-invest $250 million in BNRI’s current and future portfolio companies. “This [partnership] represents an important milestone in Qatar’s strategy of developing an asset management hub and promoting the expansion of Qatar’s financial services industry,” says Yousuf Al-Jaida, director, strategic development, asset management and banking, at the QFCA.

Rapid economic growth fueled by hydrocarbon production make the region a hotbed for investable assets. A favorable demographic also help, Al-Jaida adds. The population of Qatar, for example, has quadrupled over the past decade, to 1.7 million, and its per capita income is the second-highest in the world after Luxembourg.

While the majority of the region’s offshore wealth is held in Switzerland and the UK, Al-Jaida notes, domestic private investors have been redirecting wealth from abroad back to the region.