As companies in the region expand globally, their treasury and trade processes are growing in sophistication. As a result, transaction banking is becoming an ever-more-important business driver for both regional and global banks in the Middle East. 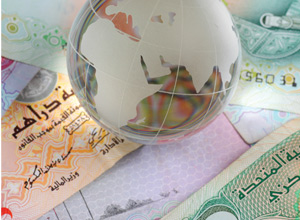 The Middle East banking sector's center of gravity, like those of other banking sectors worldwide, has shifted toward transaction banking. The global financial and economic crisis that began in 2007 left banks facing falling margins from their traditional corporate loan business and shrinking fees from capital markets and M&A.

Global and regional transaction banks have since squared off in a race to build regional market share in the Middle East, as companies seek ever-growing, and ever-more-specialized, transaction banking services.

The UAE's sophisticated trade infrastructure makes it a key connector for Southern Corridor markets. As South-South trade continues to grow—in volumes and in global economic importance—the Middle East's role as both an oil exporter and a trade intermediary will also continue to grow. As such, the region's trade and cash management needs—and related products and services—will also grow. Those banks that provide region-specific products and have the commitment and strength to be in the business for the long term will benefit—garnering more clients and a bigger chunk of each client's transaction banking wallet.

Regional banks and those focused on emerging markets may gain the most advantage by using their position at the heart of Southern Corridor trade. Standard Chartered, for example, has begun ramping up its presence and product offerings for the Middle East, Africa and Asia—focusing on integrated solutions for trade finance, cash management, working capital and inventory financing.

The cash management business of domestic banks in Middle Eastern countries is now averaging 20% yearly growth, according to Mathieu Vasseux, a partner at management consultancy Oliver Wyman. "One of the top three banks in Saudi Arabia has seen 80% year-on-year growth in 2010, with 50% recorded in 2011," he says. Vasseux cites two key drivers: "first, governments in the region pushing to increase electronic payments in order to reduce use of cash in transactions; second, the growth of liabilities in the GCC banking systems at 10% per annum."

In addition, multinational companies (MNCs) that are operating in the region are deliberately partnering with local banks, according to Patrick Gutmann, head of global transaction services at Commercial International Bank (CIB), Egypt's largest private bank.

Local banks are also deepening their transaction banking business with existing clients by pledging more of their balance sheets, according to Vasseux. "They're saying we support you through our balance sheet, so work with us more on the transaction banking side. It's about banks giving the lending but asking for more of the juicy, fee-generating business in return."

"European- or US-based banks are retrenching at the moment on the back of crises at home, so they are reducing their balance sheet commitment in the Middle East," adds Vasseux.

Among global banks trying to compete for MNC business into the Middle East, attention is shifting to more specialized regional solutions. "We've had to ensure that the information we're relaying back to treasurers is on a more holistic level, while still allowing product experts to continue transactions on a daily basis," says Sriram Iyer, head of global transaction banking for MENA (Middle East, North Africa) at Deutsche Bank. Regional treasurers, says Iyer, want visibility: They want an overlay system to have a view of the cash balances across their businesses. "You definitely can't do risk management without a view to what your funding requirements are on a daily basis."

Other banks and service providers are customizing their cash management offerings to cater to regional corporates expanding outside the MENA region—particularly into Asia. Middle East–parented companies continue to grow internationally, notes Steve Donovan, head of Citi transaction services for the Middle East, Pakistan and Turkey. "These new emerging-markets champions don't have the experience and history of their Western multinational counterparts, so you have to adopt a slightly different strategy in some of these markets."

Farooq Siddiqi, regional head of transaction banking in the UAE for Standard Chartered, notes: "Large [family-owned businesses] looking to acquire companies in Southeast Asia increasingly need us to set up treasury centers and payment factories. We are having to strip down the product service that we'd traditionally offer large multinational companies." Siddiqi has also seen demand from Middle East family-run companies for Islamic variations of liquidity management structures.

Banks are plugging into the booming Middle East–Asia trade route. In the UAE, for example, a big portion of the country's companies operate internationally. As a result, trade finance has been a key battleground for transaction banks.

The Emirates' trade finance markets have traditionally been dominated by global banks, but local players, like the National Bank of Abu Dhabi, Emirates NBD and Mashreq, are gaining ground. UAE banks have expanded systems, such as online trade services, and are offering integrated supply chain financing to large corporates and key industrial clusters.

Gutmann at CIB says: "There's a focus on broadening our products and services for online channels—for instance, the ability to originate payments through online channels, so it allows our clients to upload ACH (automated clearinghouse) batch files. Our aim is to be a local bank with online systems capability akin to global banks."

Meanwhile, China has now replaced America as the top exporter to the MENA region. There is increasing demand for credit lines, project finance and related banking products to support this growth. Arup Roy, head of transaction banking at SABB, says: "Saudi companies that want to invest in, export to or import from countries in Asia are looking for a banking partner that can help them do everything from open bank accounts to [arranging] complex trade finance solutions." The gradual internationalization of the renminbi is driving many local players to offer trade settlement in the currency. SABB was the first to offer renminbi-based services in Saudi Arabia.

As some global banks are minimizing their presence in the region—whether to focus on meeting upcoming Basel III capital requirements by decreasing their exposures or to reduce rising risk and offset falling revenue coming out of the Arab Spring—it provides an opening for regional banks to take up the slack, and they are doing so.

In Bahrain ongoing violence has battered the local economy and depressed transaction banking revenues: Banks report that trade finance activity has declined and clients are not using their credit lines. As a result, some global banks are reducing exposures.

But Shafqat Anwar, deputy group CEO for operations and technology at Ahli United Bank, Bahrain's largest lender, sees an opportunity. "On the trade finance side in Bahrain our business is with aluminum and oil companies and clients like vehicle importers. There have already been two French banks that are minimizing [their exposures] in Bahrain. We can win the trade finance business that's left behind," says Anwar.

Ultimately, it's likely that the influx of new products and services into the Middle East market will lead to more competitive pricing for corporates. If the financial crisis taught transaction banks anything, it is that they need to adapt. This change could decide who comes out on top in the Middle East.

On orders from the EU, global interbank messaging service SWIFT cut off 30 Iranian banks from its network on March 17. The move not only had consequences for developed-market companies with ties to Iran—for example those in the oil industry—but it also may have fit another link in the chain toward China's internationalization of its currency. It affected trade payments into and out of the country, and parts of the oil industry were far from pleased. Royal Dutch Shell, for example, struggled to pay $1 billion it owed Iran.

Dubai trade was expected to be the most affected by the SWIFT cancellation, given the number of Iranian businesses in the emirate. Meanwhile, Russia, China and India looked for alternative ways to pay for Iranian oil. One solution could have much broader ramifications: Iran announced plans to settle some crude oil exports to China in renminbi. This move could speed up global acceptance of the renminbi as a trade currency of choice.

"Chinese strategists, looking at possible risk scenarios, may find themselves wondering whether such a tool could ever be used against them"

Another and larger potential backlash is the delegitimization of the SWIFT network as a conduit for international settlement. A spokesperson for SWIFT admits there could be a "possible fragmentation" of the secure global financial messaging infrastructure. Some observers even suggest the possible development of a non-SWIFT payment system for Iran, China, Russia, India and other emerging markets.

Jane Kinninmont, an analyst at London's Chatham House think tank, adds: "Chinese strategists, looking at possible risk scenarios, may find themselves wondering whether such a tool could ever be used against them in the event of a serious dispute with the US in the context of long-term China-US economic rivalry."