THREE COUNTRIES AT A CROSSROADS

Countries of the Caucasus have had very different fates since the collapse of the Soviet Union. Each is moving on a path toward economic stability and growth—albeit at very different paces—but each faces unique challenges on the road. 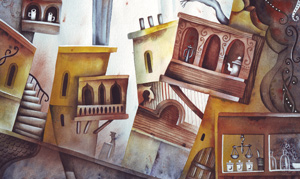 At first glance, it's difficult to find three neighboring countries that have less in common than Armenia, Azerbaijan and Georgia. The countries of the Caucasus are divided by language, culture, history, religion, economic trajectory and—at least in the case of Armenia and Azerbaijan—a long-standing security conflict. Beyond the obvious, though, the three do share more than just mutual borders. As orphans of the Soviet Union, they're each still trying to find their way to economic maturity—with varying degrees of success. All three face serious, if different, macroeconomic challenges that could derail hard-won progress. Meanwhile, political uncertainties further cloud the picture for each country.

When the Soviet Union collapsed in 1991, some of the newly independent republics that had formed the USSR had an easier path to prosperity than others. Azerbaijan was one of the winners of the geopolitical luck of the draw. With the equivalent of 4.5 billion tons of fuel in its ambit, according to the State Oil Company of Azerbaijan (SOCAR), it practically floats on oil and gas. The country's hydrocarbon wealth is the foundation of the economy, responsible for GDP per capita being nearly double that of its two Caucasus neighbors.

HUNTING FOR DIVERSIFICATION IN AZERBAIJAN

As a result, Azerbaijan's fiscal position—as long as oil prices are high—is bulletproof, with an estimated fiscal surplus of 13.3% of GPD in 2011, according to the IMF, and a current-account surplus of 26.3%. The country has an investment-grade rating from all three major ratings services. Highlighting its strong investment appeal, SOCAR in early February placed a maiden $500 million, five-year Eurobond at a yield of 5.45% that, according to media reports, was eight times oversubscribed.

But the government is aware that too much of a good thing can be bad for a country's macroeconomic health. "Azerbaijan wants to diversify beyond oil and gas," says Gemma Ferst, an analyst in London at political risk consultancy Eurasia Group. "But in practice, foreign investors outside those sectors have a tough time."

With little foreign investment outside the hydrocarbon sector, most non-hydrocarbon growth is linked to the state's fiscal activities. The vested interests that dominate much of the rest of the economy fiercely resist new entrants, and the investment environment is prickly at best. Azerbaijan ranks 143rd—out of 183, and below the likes of Pakistan and Sierra Leone—in corruption watchdog Transparency International's Corruption Perceptions Index.

Wealth remains heavily concentrated. "It's an economy that is making central Baku wealthy, but the rest of the country is far behind," says Thomas de Waal, a Caucasus expert at the Carnegie Endowment for International Peace in Washington, DC. Under the steel fist of president Ilham Aliyev, the fragmented opposition poses little risk to the regime, and the Arab Spring caused scarcely a ripple in what is one of the region's more authoritarian states. The focus of political intrigue is on rival elite groups jockeying for position and access to cash flows, rather than over the issues of representation and democracy.

For beleaguered Armenia, a need to diversify away from enormous natural resource wealth would be an enviable problem. The land-locked republic is largely devoid of natural resources, and transport links and infrastructure are poor. The economy is crippled by a long-standing trade blockade with Azerbaijan and Turkey, two of its four neighbors, over the disputed territory of Nagorno-Karabakh. The possibility that one of its frequent border skirmishes with Azerbaijan might explode into large-scale hostilities is a nagging risk, exacerbated by Azerbaijan's aggressive defense buildup.

Perhaps Armenia's biggest long-term challenge, though, is that its biggest export is its only real resource: human capital. Government figures put the country's population at 3.3 million inhabitants, but independent experts suggest the real figure is closer to 2.5 million at best, and still falling. The Armenian diaspora, and the remittances they send back home, are a vital source of capital to the country. EBRD economist Alexander Pivovarsky puts the level of remittances at 12% of GDP, but when this cash flow ebbs, as it did during the 2008–2009 global economic crisis, the impact is enormous, as evidenced by the country's 14.1% economic contraction in 2009.

Armenia has implemented some structural reforms to reduce barriers to doing business and to liberalize some industries, in particular the utilities sector. Gold mining is an area of increasing interest, and there are niche segments, like a few high-tech subsectors, where the economy has found traction. However, both the mining industries and the utilities sectors have been swamped by Russian investors and the assets, often picked up in controversial deals, with critics citing corruption at every turn.

Reforms at this point will need to be significant to have any major effect. The economy—with a 2011 current-account deficit of 12.3% of GDP, according to the IMF—is coming under increasing pressure. "Armenia's medium-term prospects depend to a large extent on the authorities' ability to create conditions for investment and productivity improvements," says the EBRD in a recent draft strategy paper for assistance to the country.

A recent report by think tank and policy advocacy group Armenia Policy Forum warns that without substantial policy changes, within the next three years the country "will be forced to undergo a large and painful devaluation... and/or an external sovereign debt restructuring or default." The group calls on the government to fight the crony capitalism that distorts much of the economy. In the context of upcoming parliamentary elections, it warns that "yet another fraudulent election" will cause only more problems.

RAFT OF REFORMS IN GEORGIA

Georgia, meanwhile, has taken a different approach altogether. President Mikhail Saakashvili spearheaded many reforms that—to the shock of many cynical observers and analysts—in recent years have largely eradicated petty corruption, resulted in a relatively well-functioning public services sector and completely revamped the business environment. The country ranks 16th in the World Bank's annual ease-of-doing-business survey—good enough to score ahead of Germany and Switzerland, not to mention every other country in Eastern Europe and Central Asia.

With its facelift well under way, the question is, what's next for Georgia? The economy has benefited from large-scale aid from international donors, particularly in the aftermath of the country's brief war with Russia in August 2008. "Georgia's challenge is to make a permanent transition from investment financed by international financial institutions to genuine and sustainable private sector investment," says Pivovarsky of the EBRD.

De Waal, in a recent report on Georgia, sets forth three development paths: A reversion of sorts to the "old Georgia"; a Singapore-style openness to investment as a growth vehicle; or a deepening of links with the European Union as the path forward. A recent declining trajectory for foreign direct investment, from a high of $2 billion in 2007, to $553 million in 2010, casts a pall over the prospects for sustainable private sector investment.

Politically, Georgia is still struggling with its post-Soviet baggage. The president's my-way-or-no-way approach to politics prompts some analysts to question whether the Georgian model of modernization without democracy is sustainable. Saakashvili's over-the-top—and, some analysts say, absurd and unfeasible—plans to build a new city in a poverty-stricken marsh near the Black Sea, echoing the Chinese notion of the instant city, are "all you need to know about Saakashvili's Georgia," says one analyst.

With elections and a new constitution looming next year, Georgia is approaching a crossroads. Saakashvili may decide to open up the political arena to real competition—or he may decide to hold on to power by having himself named to the newly empowered post of prime minister, echoing a maneuver engineered by Russia's former prime minister and newly-elected president Vladimir Putin.

BANK OF GEORGIA GOES TO LONDON

Bank of Georgia, the Caucasus country's largest bank, entered hallowed ground in February of this year when it became just the second foreign bank to take a premium listing on the LSE. This makes the shares a must-own for some pension funds and index trackers—and also puts it in position to win a spot in the FTSE 250.

That's quite an accomplishment for a bank with just under $500 million in shareholders' equity and assets of $2.6 billion as of 2011. And it's even more impressive in the context of how far the bank has come from its roots as a privatized Soviet financing institution in the mid-1990s. The EBRD became a shareholder a few years later, and the bank's shares began trading on the local exchange in 2001. In late 2004 a new management team took over, launching an array of new products and services. Two years later Bank of Georgia became the first firm from Georgia—and the second from the former Soviet Union—to be listed on the London Stock Exchange.

Unusually for listed companies from Russia and other parts of the former Soviet Union—many of which are natural resource companies controlled by the state or an oligarch—Bank of Georgia has a 95% free float, which is held by global institutional investors. Almost uniquely, Bank of Georgia wears its transparency as a badge of honor. And it's also one of the safest banks anywhere, with a BIS Tier 1 ratio of 22%, and a loan-to-deposit ratio of 1.0, according to the bank.

Of course, with a market capitalization of around $625 million, the bank isn't big enough to be on everybody's radar. And although Georgia has made significant strides in recent years, political and macroeconomic risks still run high. But in a region where many companies see only lemons, Bank of Georgia has made lemonade, by the gallon.